The Love You Save

Posted in: Disc Reviews by William O'Donnell on November 17th, 2012 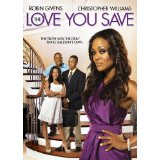 A wealthy mother of three has a secret revealed about her past when her well-meaning son brings a homeless man over for dinner. This production is a play that has been filmed (not adapted) with a laugh-track spliced in, making it resemble a television show. It’s meant to be inspirational but it’s really just a big mess.

Every single scene in this “film” is flawed. The moral questions brought up are contrived and the solutions are ridiculous. The matriarch of the family has made millions in real estate and is planning to shut down a homeless shelter by buying the property (this is actually revealed at the climax of the film but it’s so incredibly predictable that I may as well put it right here at the beginning of my review). One of her children wants to stop the deal and save the shelter after befriending one of its residents. I may as well spoil this part too: the homeless man turns out to be the father of the family. That’s right. The characters in this film only exist in total extremes; either incredibly rich or utterly poor. The solutions to everyone’s problems is when a millionaire faces a moral dilemma and uses their wealth to fix everything…just like it is for all families right? Totally plausible and relatable right?

The dialogue is laughable, and I meant that in a laugh-AT-it sort of way. The rich kids condemn all poor people with unnatural condescension, yet are given moments where they try to explain how they’re “misunderstood.” No precedent has been set to prove that these kids have multiple sides to their personalities or why they would act in completely contradictory ways from one scene to another. There is also a maid character whose accent comes and goes while speaking in an offensively forced, mistake ridden English. I suppose they’re trying establish that English is her second language but her mistakes are played for laughs at her expense (a point the other character make sure to mention in case the audience did not hear the canned laughter). It is hard to witness.

No character goes through a believable arc. The only one to have a radical change is the mother and this only comes after a Gospel singer inexplicably arrives at her house to sing a song about being motivated by God. I suppose that scene is like a formulaic Deus ex Machina but that feels like too clever a device to be used in this level of film.

Oh the songs…I cannot leave them out of this review. I should mention, this is in no way a musical. ¾ of the film has passed by when ALL OF A SUDDEN the homeless father steps to one side and begins singing a song to his children. Again…this is NOT a musical. Nobody has sung anything up to this point. This film does not take place in that magical realm where people can break out into dances and songs and everyone treats it as normal. This man chose to sing a random song and no character watching saw it for the insane gesture that it truly is.

Not to be outdone, there is the Gospel singer. This musical number tops the previous in that it not only has a random song but the character singing it has not been introduced at all in this film. With about 10 minutes to go in this feature length film a TOTALLY new character strolls in and starts singing to the main character and again, nobody reacts according (my reaction would be fear and confusion). At least the previous song was listenable. This singer performs as if she is hearing the song for the first time. Her voice is not all that strong but she still tries to belt it out at an Aretha Franklin level that she cannot hope to ever achieve.

What’s next? Oh here’s something that bothered me; the cast is supposed to be a family and yet they look nothing alike. The most noticeable of this is the fact that the daughter is very clearly of a mixed Asian-African bloodline. I know that not every cast needs to look SO similar that we truly believe them to be family, but there should be at least some resemblance. A red-headed Scotsman might as well have waltzed in and called himself their other sibling. But I digress from that gripe…and move right into the next one!

The editing and camera placement in this production is the very definition of amateurish. Many scenes go by where non-speaking characters are cut out of the frame unnecessarily. The cuts made for reaction shots are badly timed as well, and you can hear actors making mistakes when they miss a line cue or hesitate too long (something that the magic of editing SHOULD have removed since this isn’t a live presentation of this play…but I suppose the director never learned that fact). It’s truly as if the director filmed a rehearsal of the play on three fixed cameras pointed at two sets and kept everyone’s first take.

The laugh track, like many other things in this film, confused me. I suspected that this might have been a television show at first but the 90 minute runtime, and lack of follow-up episodes, dispelled that theory. To me it just speaks to a distrust of the dialogue and the storytelling. The jokes are cliché as it is, but adding a laugh track to a film just screams recognizing their own weakness. When I put it that way, it almost sounds like an honest gesture on the filmmakers part instead of the oldest tactic in the book to instigate chuckles.

Widescreen 1.78:1. A decent picture quality displaying an extremely bland pair of sets. There is nothing dynamic about the lighting but the presentation is acceptably clear.

Dolby Digital Stereo. The dialogue is clear enough to be understood but the microphones are picking up everything in the room. Each voice can be heard reverberating off of the cheap set. The footsteps sounds hollow and echo more than they should on film. Noewhere near enough care went into the sound composition or mending in post-production.

Photo Gallery: Didn’t get enough from the cover photos on the DVD case or the film itself? Well, here’s some more images for your enjoyment. One last gripe…the homeless father character is dressed well but has a shot where he is holding out empty pockets…it’s cheesy, it doesn’t speak to what the film is trying to convey at all…I know it’s a minor thing but to me it encompasses all that is wrong with what this film/play attempted to do.

When critiquing this film I could factor in the network it was created for. GMC is a Christian channel and this film (according to the promos) calls this an “inspirational” film. Considering that angle, this film fails even more than if it weren’t advertised as such. It is impossible to relate to this film and its characters therefore how can one be inspired by something so disjointed from reality?

This film reaches a level of incompetance that makes me want to compare it to The Room. The only enjoyment that can be derived from it is either laughing at it, or the satisfaction one gets by ranting about something horrible (the sensation I happen to be feeling as I complete this review).

Lincoln The Universe in 3D (Blu-Ray)