Posted in: Disc Reviews by Jonathan Foster on December 3rd, 2012 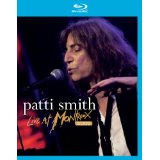 In 1975, Gerald Ford was President of the United States, Wheel of Fortune made its debut, disco was groovy, and Patti Smith burst onto the music scene with her debut album, Horses. She would go on to become known as the “Godmother of Punk” and greatly influence the New Wave genre of music. I admit, before watching this concert, I had only heard one of Smith’s songs — her #1 single, “Because the Night” — so I was curious to hear more of her material. The fact that my aunt says she still owns an LP of Horses she bought as a teenager intrigued me more.

This concert was filmed during the 2005 Montreux Jazz Festival in Switzerland. Smith and her band spend 83 minutes playing 12 songs, including 11 from Smith’s records and a cover of Bob Dylan’s “Like a Rolling Stone.” The entire group performs with the ease and familiarity that only comes with years and years of playing together. Lenny Kaye and Tom Verlaine’s guitar work anchors each song and blends very well with Tony Shanahan’s bass and Jay Dee Daugherty’s drums. Smith herself even jumps on guitar for a song or two, but someone needs to keep her away from the clarinet. I’m no expert, but I’m pretty sure the clarinet shouldn’t sound like someone strangling a sick goose. I actually ended up muting my TV whenever she got to wailing on the clarinet.

There were times, when the group was firing on all cylinders, that I felt like I was at a ‘70s concert. The music, while not exactly my favorite, was solid and my favorite song on the list was “Free Money.” I also enjoyed “Redondo Beach”, “Dancing Barefoot”, and Smith’s Bob Dylan cover.

However, I think Smith believed she was still in the 70’s as well. There are times when it seems the singer forgets she’s at a concert and thinks she’s at a protest rally. Smith gets a bit preachy, especially before “Peaceable Kingdom” and “People Have the Power.” Her rhetoric is jarring and disrupts the flow of the concert.

This concert is a showcase of her 30-year (at the time) career. Smith and her band clearly know what their fans want and are only too happy to give it to them. This is a group who clearly loves what they do, and it shows on their faces.

2. Beneath the Southern Cross

12. People Have the Power

Patti Smith: Live at Montreux is shown in a 1080p image presented with an AVC MPEG-4 codec at an average of 28 mbps.  This Blu-ray’s aspect ratio is 1.78:1.  Overall, the video makes the concert seem very intimate, with many close-ups on the faces of those on stage. The rest of the shots are filmed so close, you almost feel like you’re on stage with the band. The only complaint I have is the wide-angle crowd shots. Not only do they occur at odd times, but you can’t see the audience, so it looks like they’re playing to an empty room with a black hole in the middle. It’s distracting and the footage from that camera really shouldn’t have been used at all.

This Blu-ray has a DTS-HD Master Audio 5.1 track and it is really good, capturing every note played and sung. Everything is crisp and clear, which is great for Smith and Shanahan’s vocals and most of the instruments, but really bad for Kaye’s vocals (he should stick to playing the guitar) and that god-awful clarinet.

Just like with the video, the audience is missing. The only time I heard them was at the beginning and end of the concert. Either this was the quietest, most polite audience I’ve ever seen or they edited it out. As weird as that was, I actually liked it. If I’m watching a concert, I want to hear the performers, not the usually off-key fans. Still, it is unusual for a concert performance.

If you like ‘70s-era music, and Patti Smith in particular, then this is the disc for you. Smith sings her heart out and, while her style isn’t my cup of tea, I respect her passion and what she means to music history. Those who grew up during this time may enjoy this for nostalgia’s sake, but unless you like this genre, I’d pass on this disc.

Storage Wars Texas: Season One An Evening With Peter Frampton