Posted in: Disc Reviews by Michael Durr on November 30th, 2012 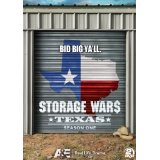 So you say Shipping Wars was not enough Waring for you? Are you back for more? Alright, let us dig through the review pile and get some more action for you reality show freaks. How about Hamster Wars? Okay, okay perhaps Paper Airplane Wars? Never mind, I can not stand paper cuts. Ah I have the perfect one here, a spinoff of one of the most popular reality shows out there. Its name is Storage Wars: Texas. Well yee-haw and get me my cowboy hat. This might be a hootenanny after all.

This season one of Storage Wars: Texas is actually something of a misnomer. It contains sixteen episodes and actually it is comprised of the first two seasons of the show. There is a distinction between the seasons which I will explain in just a little bit. As with any reality show, there are usual lists of players who need some introduction.

For the first season, we have Moe Prigoff. An awkward man by anybody’s definition, he is a practicing foot doctor as well and operates an antique boutique. He also has the best wardrobe and cars of the participants. Then we got Victor Rjesnjansky, a New York native (wait…what, we got a Yankee in Texas? Quick, get a rope.) who runs a couple of shops in Tyler, Tx. He is known for distinct voice and “Right Here” catchphrase. I have actually caught myself using “yokels” lately in my speech which is his word for Texans.

Ricky and Bubba Smith (uncle and nephew) operate a resale warehouse in Lampasas, Tx and often play up their country attitude in order to get the drop on lockers. They also like to eat (Now that was not nice, you are not exactly light mister two slices short of a large pizza). Anyway, last but not least, we have the tandem of Lesa Lewis and Jerry Simpson. They run the “Again and Again Resale” shop in Crockett, Texas and have a propensity for jewelry though Lesa tends to pocket more than she sells at the shop.

The main difference as I mentioned between the first and the second season is that Moe Prigoff (despite the fact that he was my favorite official cast member of the first two seasons) was moved to the side a bit in favor of Roy Williams. Now if Roy sounds famous, well he did play a little bit of football for the Dallas Cowboys and the Cincinnati Bengals as a Pro Bowl safety. Now retired and after a chance encounter with Ricky and Bubba, he seems eager to try his hand at the storage locker game.

Let’s take a look at a few of the episodes. From the first season, Texas Sold Em introduces us to the cast and we see Moe get his hands on some rare paintings. In addition, Bubba and Ricky win a locker that looks straight out of an old hardware store complete with an old Michelin collectible. Victor also picks up a little more than some interesting photographs in what looks like a locker that might have to be turned over the authorities.

Then in Mo Money, Moe Prigroff, we watch as Moe drops a locker (the term used to describe one person bidding up another and then letting them have it at an unfavorable price) on Victor. But Victor does take the time to go through it and makes it worth his while. Ricky and Bubba get a contractor’s locker and Moe is able to turn some junk into huge profits via a very special friend named Mary Padian at Mary’s Finds.

Moving on to the second season (and second disc), we take a look at Dallas Cowboys and Indians. Coming from Fort Worth, Texas we get to see Roy Williams’ first action (though he appears in an earlier episode as an “appraiser”) with Ricky and Bubba to help him along the way. Victor gets a cheapie locker (which he then turns over in record time to another bidder minus one essential piece) and then Lesa finally gets some revenge on Victor when she scores some choice paintball gear.

In our last episode of the set, A Fistful of Auctions, we watch a Paris Hilton-wannabe female (complete with dog) fiddle with death as she goes head with Leesa and Bubba in a pair of storage lockers. Lesa ends up with some clothes and Bubba & Ricky take a trip to the old west with a locker victory. Across the way in Lewisville, we see how much Roy has actually learned as he tries to do a solo act. But Victor is there to steal Roy’s thunder and score a hot tub as well.

Most of those who are reading this know I am a pretty huge Storage Wars fan. I happen to live in Texas (and much of this show’s locations are pretty familiar to me as I spent six years in the Dallas/Fort Worth metropolitan area) and I was concerned that this show would spend too much time dealing with the various Texas stereotypes. But then I realize I spend much of my time laughing at various Texas stereotypes because they are well true.

That aside, this show does have a few Texas stereotypical moments but they spend a lot of time developing the characters which I always enjoy. Everybody in this show is pretty likeable. Ricky and Bubba (despite being the most stereotypical of all) are quite entertaining and very savvy at what they do. Victor I like of course due to his New York style and sensibilities. Moe, I completely enjoy who reminds me a little bit of Barry from the regular Storage Wars show.

Moe also introduces the world to Mary Padian of Mary’s Finds who turns retro junk into retro treasure. It’s important because she starts to accompany Moe on locker auctions and eventually teams up with him in Season Three. I also *ahem* have a huge crush on her. Anyway, the only team that really did not interest me was Lesa and Jerry. Oh I like Jerry plenty but Lesa is every bad female Texas stereotype rolled into one. That aside, the show really picks up steam somewhere in the second season and I find myself watching this show more and more with every passing week of a new episode.

The video is in 1.78:1 Widescreen presentation. The video quality is somewhat mixed at times depending on their location of storage lockers and appraiser shops. It is certainly watchable but do not expect to find a huge amount of detail in the proceedings. At the best moments, one can find that little trinket in the background that you wonder if one of the main cast members has overlooked. However, in the next breath the camera work will leave you scratching your head trying to find anything of value in a given locker.

For the audio portion, we get a 2.0 English Dolby Digital track. This is nearly one hundred percent dialog and a re-mixed “Money Owns this Town” with a slight country twang. The only sound effects you will find here is the opening and closing of lockers (or throwing things into the proverbial junk pile). It works, but again there is nothing special here. English and Spanish subtitles are also available.

Lesa and Jerry actually left at the end of season two due to some legal complications. (Jerry had a couple of prior arrests which he did not disclose to the show). Roy also left at the end of season two. They were replaced by Mary (which I definitely approve of) and a newcomer named Jenny in Season three. As mentioned, the show continues to get better with each passing week and at times I find myself watching it more than the original Storage Wars.

The disc technically is okay at best but it does the job. The highlight is the bonus footage which includes some choice moments. I do appreciate the fact that A&E is starting to learn to include more than just the shows that they tend to run over and over again during the week. This gets a hefty recommendation and a chance to pick up a show on the ground level. Buying storage lockers is hard work, but these guys make it look so entertaining. A true treat.

Episode List
Disc One
Texas Sold Em
Bounty Hunter Bubba Fett
Snake, Rattle and Roll
Mo Money, Moe Prigoff
The Good, The Bad and the Hungry
Remember the Alamo?
Home on the Strange
The Surgeon, the Witch, and the Wardrobe
Puffy in the Sky with Diamonds

Disc Two
If I Were a Tibettin’ Man
Dallas Cowboys and Indians
Who Bought JFK?
High Tea Tighty
For a Few Lockers More
Fandom of the Opera
A Fistful of Auctions

Michael Durr has been reviewing movies for the better part of fifteen years now. He primarily enjoys thrillers, sci-fi, animation and even a little courtroom drama. His favorite films include Escape from New York, the Goonies and anything with Alyssa Milano. When he’s not praising Kurt Russell as the greatest actor of our time or scratching his head over a David Lynch flick, he’s spending time at home in Texas with his lovely wife, Lori and his amazing son. How they put up with him is a mystery, but even Basil Rathbone doesn’t have the time to solve that one.
Holiday Gift Guide Spotlight – MGM’s James Bond 50 Patti Smith: Live at Montreux (Blu-ray)