An Evening With Peter Frampton

Posted in: Disc Reviews by Jonathan Foster on December 3rd, 2012 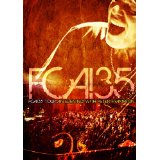 Jimi Hendrix. Carlos Santana. Jimmy Paige. Eddie Van Halen. Slash. These are arguably some of the greatest guitar gods to ever rock the stage. Yet somehow this pantheon feels incomplete. I humbly submit Peter Frampton’s name for inclusion with these mighty warriors of rock. In 1976, the singer released his most successful album — Frampton Comes Alive! — and, according to this Blu-ray’s box, “the best-selling live album in the world.” In 2011-2012, Frampton went on tour in celebration of its 35th anniversary. This concert Blu-ray was filmed over two shows on this tour and features 26 songs. The first 14 are the entirety of Frampton Comes Alive! played front to back, with the remainder of the songs being highlights from his long career all the way through his most recent album, Thank You Mr. Churchill.

At 62, Frampton hasn’t mellowed at all. His vocals and guitar-playing prowess haven’t diminished one bit and blend smoothly with the backing vocals and guitars of Rob Arthur and Adam Lester. Arthur pulls triple-duty, playing keyboards as well. Stanley Sheldon and Dan Wojciechowski anchor the concert on the bass and drums, respectively. An especially cool moment occurs when Frampton invites his son, Julian, to come on stage and sing with him. Julian Frampton performs “Road to the Sun” and “I Don’t Need No Doctor”. I wish he had sung some more, because his energetic voice pairs well with his dad’s epic guitar playing.

In addition to his hits, “Show Me the Way” and “Baby, I Love Your Way”, I discovered some new favorite Frampton songs, such as the bluesy “Do You Feel Like We Do” and the crazy “Shine On.” I also enjoyed Frampton’s covers. His renditions of The Stones’ “Jumpin’ Jack Flash” and The Beatles’ “While My Guitar Gently Weeps” are great, but my favorite was his instrumental version of Soundgarden’s “Black Hole Sun”. He manages to make it mellow and rock at the same time. His performances with Julian are also really, really good.

Frampton is one of classic rock’s undisputed kings and this Blu-ray shows why. He and the crowd feed off each other, and he makes fun of himself by cracking jokes about his age and showing clips of his cameo on The Simpsons. This Blu-ray is Peter Frampton in a nutshell, showcasing his talent and music from an amazing career.

7. Penny for Your Thoughts

20. Vaudeville Nanna and the Banjolele

26. While My Guitar Gently Weeps

The aspect ratio for FCA!35 Tour: An Evening with Peter Frampton is 1.78:1. It has a crystal clear 1080p image with an AVC-MPEG 4 codec at an average of 25 mbps. I know this took place during two different concerts at two different venues, but the editing is so smooth the only way I could tell the difference was that Frampton has a different shirt on.

The stage is simple, with just the band against a black background. However, the video is so clean and the color levels so good that Frampton and his band are clearly visible no matter where they are, even though they are all wearing at least one article of black clothing.

The DTS-HD Master Audio 5.1 track captures every moment of this amazing concert. Every vocal is clear and easily understood, and every instrument is easily identifiable and sounds great. Even the talk box sounds great! The audience is audible, but not so much that it overwhelms those performing and becomes annoying. The moments where Frampton has the audience sing the chorus on a few songs is the only time they are really audible. You can also listen to this Blu-ray with an LCPM Stereo track.

The Phoenix (23:32): A cool documentary about Frampton’s reunion with his favorite Les Paul guitar, which was lost in a 1980 plane crash and not recovered until 2012.

This Blu-ray is a must-have for anyone who likes classic rock, or music in general. It is beautiful both visually and musically, and I heartily recommend it.