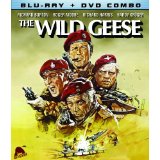 In my youth, I watched a healthy dose of A-Team. Four men who branded as war criminals for a crime they did not commit doing odd jobs for money. Perhaps that is over simplifying things, but it did provide me with tons of fun hours cheering for explosions and witnessing the genius known as Murdoch for my viewing pleasure. Today, we take a look at a film which might be in the vein of what the four guys of A-Team might have been like if they were transported to Africa during the turbulent 60’s. We have today, the film called: The Wild Geese.

A plane flies into London and we find ourselves seated at an airport. Colonel Allen Faulkner (played by Richard Burton) sits at the airport lounge and drinks his whiskey until he is picked up by a driver and transported to a giant white house where a merchant banker Sir Edward Matherson (played by Stewart Granger) lives. Faulkner is met at the door by Matherson’s assistant, Thomas Balfour (played by Barry Foster) and immediately led to the den where the banker is waiting for him.

Matherson tells Faulkner that he may has as much free whiskey as he would like and the Colonel tells a joke about his liver and body being separately buried when he dies. Nobody laughs (including the audience) and they get down to business. Faulkner has a decorated war record but he did have a disastrous effort almost two years ago in the form of one, Julius Limbani (played by Winston Ntshona), an imprisoned leader of a central African country. Matherson’s request is simple, infiltrate Africa, find Limbani and get him back safely before anybody is able to execute him.

Faulkner and Matherson discuss payment and hastily agree to the sums. Faulkner also mentions that he will need a large team and discusses key members with the assistant, Balfour. The first member of this troupe is Shawn Fynn (played by Roger Moore) who will serve as the resident pilot of the group. Unfortunately, it appears that Shawn is working as a currency smuggler and has found himself in the middle of illicit drugs and the local mafia. After an incident where Frynn forces one of the higher members in the mafia to eat his own drugs, contracts are taken out for his life.

Meanwhile, the Colonel pays his old friend, Rafer Janders (played by Richard Harris) a visit. Rafer might have been a brilliant military tactician in the army but he has settled down into a civilian life with his son, Emile (played by Paul Spurrier) and is quite content. As expected, Janders is quite skeptical of the plan and initially wants nothing to do with it. Furthermore, Janders has a trip with his son planned and does not to miss it. But before Faulkner goes, he asks Janders how he would get in and out of Africa.

Somehow through careful conversation, Faulkner is able to convince Rafer to join his cause promising him time with his son first. However, Janders and Frynn only represent a small portion of this fifty member troupe. Faulkner has some other people in mind including Pieter Coetzee (played by Hardy Kruger), a special forces operator and Sandy Young (played by Jack Watson), who will serve as the troupe’s drill sergeant. With the team in place, the training time will be short for what will turn out to be the deadliest missions of their lives.

The movie starts out as an interesting mercenary film. Faulkner gets his little troupe together full of characters and personalities. Richard Burton who plays Faulkner oozes personality and charm and certainly carries this film. Furthermore, Roger Moore plays a fine second fiddle and could have honestly been the lead in this film with his elegant persona. Richard Harris also lays a capable hand despite some questionable choices on his part in the beginning of the film. But somewhere this film just decides to lose its character and go straight into killing a bunch of African military types.

It is a brutal film, I get that and the old Rambo mentality is in full effect when a small troupe can take out group after group of African military goons. But something about a plethora of 60+ year old men taking out men in their prime with barely lifting a finger is pretty laughable. Furthermore, if one was to look honestly at this film in this day and age, it would reek of racism. Sure it was a different time, but this film was made in the late seventies not the earlier part of the century and it’s a hard film to watch at times. We won’t even spend time in this review to go over the ridiculous attempt at a happy ending.

Wild Geese did pretty well in Britain as expected but was something of a dismal failure here in America thanks to the collapse of distributor Allied Artists. The film also met with much controversy because this was actually filmed in South Africa during the apartheid regime. It is the kind of film unfortunately for those retirees who are stuck between watching episodes of 60 minutes and Bonanza and cannot decide on either. For those people, sure I will recommend the movie but for the others I would just say to stay away. Enjoy something else, kids.

Michael Durr has been reviewing movies for the better part of fifteen years now. He primarily enjoys thrillers, sci-fi, animation and even a little courtroom drama. His favorite films include Escape from New York, the Goonies and anything with Alyssa Milano. When he’s not praising Kurt Russell as the greatest actor of our time or scratching his head over a David Lynch flick, he’s spending time at home in Texas with his lovely wife, Lori and his amazing son. How they put up with him is a mystery, but even Basil Rathbone doesn’t have the time to solve that one.
War of the Dead (Blu-ray) 12 Days Of Christmas Giveaways – Day Six: Ancient Rome Anthology From A&E/History