War of the Dead (Blu-ray) 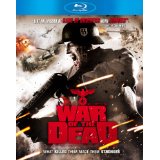 As The Walking Dead continues to smash ratings records (while compulsively changing showrunners, no less) and Summit Entertainment — the studio behind The Twilight Saga — prepares to throw its considerable marketing muscle behind February’s zombie rom-com Warm Bodies, it’s fair to say the shambling undead are having a major pop culture moment. Yes, zombies are hot right now, but a curious subgenre has already endured for many decades: I’m talking about the zombie Nazi movie.

From Shock Waves and Zombie Lake in the 1970s and 80s to recent examples like Dead Snow and this year’s Outpost: Black Sun, filmmakers have delighted in mashing up one of history’s most infamous real-life group of monsters with one of cinema’s most popular terrors for decades. Though they’ve been enjoyable to varying degrees, the subgenre is yet to produce a classic film in the vein of George A. Romero’s work or even something that made a notable pop culture impact like Zombieland or Shaun of the Dead. I’m sorry to say War of the Dead won’t be the first.

It’s too bad because the film begins promisingly enough: Germans capture a Russian soldier and use him as a guinea pig for their top-secret “Anti-Death” experiments, which results in his re-animation as a powerful, glassy-eyed beast after he passes away. I loved how the movie didn’t provide the informational text about the time period or the Nazi experiments until after the opening sequence with the Russian soldier, which made the scene much more disorienting and disconcerting. Unfortunately, this opening scene turned out to be the end of any aspirations War of the Dead may have had about being a great film. (Assuming it had such aspirations in the first place.) The good-ish news is that it’s still a fairly watchable, thoroughly trashy flick.

The title suggests a thematic — if not a literal — link to Romero’s legendary undead franchise, but Finnish director Marko Makilaakso has more basic things on his mind. After the opening scene, the action picks up in 1941 with a group of Finnish and American soldiers teaming up to fight the Russians and destroy an enemy bunker. Unbeknownst to them, they’re in the same region where the Anti-Death experiments took place two years earlier. So you can imagine their surprise when some of the troops they’ve just killed come back to life and start attacking. The group reluctantly accepts help from a young Russian soldier and fights for survival.

And it’s when the “zombies” attack that War of the Dead began to lose me. (The sarcastic quotation marks around the word “zombies” were not an accident.) I’m not a rigid Slow Zombie traditionalist, so when I saw the monsters in this flick take off like track stars it didn’t really bother me. However, when they started flinging themselves off trees and crashing through windows and rooftops, they looked more like the angry gorillas in Congo than zombies. I haven’t even mentioned how they also engaged in hand-to-hand combat with the living. Look, I’m not saying the undead can only act one way. It’s just that there’s only so much you can have them do before you eliminate the fun of having a zombie movie in the first place. Plus, if you’re going to make these creatures smart enough to fight, why not go all the way and give them the ability to wield cool weapons? Instead, these “zombies” are only smart enough to get their asses kicked by our heroes in a fist fight.

Speaking of our heroes, the cast is led by Andrew Tiernan as the American Captain Stone. (The film was previously known as Stone’s War before the title got Romero-fied.) Tiernan is British, and he definitely falls into the trap of doing a stereotypical Noo Yawk accent, especially whenever he refers to young Kolya (Samuel Vauramo) as “kid.” I found the scenes between the Russian Kolya and the Finnish Lt. Laakso (Mikko Leppilampi) to be more effective. Laakso goes from thoroughly distrusting his Russian counterpart to laying his life on the line for him during an exciting escape attempt toward the end. (Worried that you may miss the message, Makilaakso — also a co-writer on the film — explicitly points out how extraordinary it is for Finnish and Russian soldiers to be working together.)

Makilaakso brings that same lack of subtlety to the rest of War of the Dead. There’s an unintentionally hilarious scene where supposedly ominous dialogue is punctuated by thunder strikes. The biggest disappointment — in case you couldn’t tell — are the creatures themselves. Their design seems to consist of glassy-eyed contact lenses and not much else because we never get a great look at them with one notable exception: the jerky Finnish captain played by Jouko Ahola. Captain Stone also eventually becomes a quippy action hero as he dispatches “zombies” like he’s Schwarzenegger in Commando.

Don’t get me wrong, Commando is a hell of a lot of fun. War of the Dead isn’t nearly as much fun, but it doesn’t take itself too seriously so it has more in common with other cheesy B-action flicks than seriously scary horror films.

War of the Dead is presented in an aspect ratio of 2.35:1. The 1080p image is arrived at with an AVC MPEG-4 codec at an average of 28 mbps. For a movie that is set in an underground bunker for a significant amount of time, I first and foremost expect the black levels to be spot on. This transfer delivers on that front. Additionally, the picture is sharp and impressively textured. (Nice detail on the uniforms; the dirt and blood spatter also show up nicely on actors’ faces.)

I wish I could say the same for the wintry outdoor scenes. The prominent grain in most of these shots actually goes well with the snowy landscapes. Also, the palette is intentionally gray and dreary, which isn’t conducive to letting colors shine. Overall, it’s a decent presentation of a relatively lo-fi production.

The DTS-HD Master Audio 5.1 track is dominated by the frequent firefights in this film, which loudly fill all the speakers. There are also a few instances of subtle sound effects, like an all-encompassing, waning heartbeat in the opening sequence. There are also some not-so-nice effects, like the fact that it’s painfully obvious all of the creature sound effects were dubbed in during post production. (Especially since they barely looked and acted like zombies in the first place.) Levels on the dialogue were fine; if it was a bit hard to understand, it probably had more to do with the actors’ accented English than the track.

If you pop this one into your Blu-ray player expecting a traditional zombie film — or anything that even remotely resembles the popular shambling monsters — you’re in for a major letdown. However, if you’re down for watching a silly action flick with questionable acting where a lot of stuff gets blown up…I still wouldn’t fully recommend you watch this one. But there’s a much better chance you’ll enjoy it if you go in with the latter mindset. (The fact that the only special feature is a theatrical trailer doesn’t exactly make this title more enticing.)