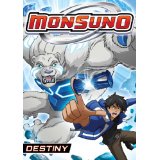 And for every kid-centric animated program, a lucrative line of tie-in toys. Monsuno borrows liberally — the nicest way I know of saying “rips off” — from previous phenomena like Beyblade, Pokemon and Yu-Gi-Oh! Though it primarily exists to help sell derivative trading cards and action figures, the show establishes a surprisingly intriguing world in its first handful of episodes.

Monsuno: Destiny presents the first five installments (out of 26) of the Japanese import, which premiered on Nicktoons in the early part of 2012. We’re dropped abruptly into the saga of teenage Chase Suno (voice of Cam Clarke), who is searching for his scientist father Jeredy (Clarke again) with the help of close friends Jinja (Karen Strassman) and Bren (Christopher Smith). The confusing, apocalyptic opening scene of Ep. 1/“Clash” isn’t resolved by the end of this batch of episodes, which is to be expected when you include less than 20 percent of a show in a DVD set.

In their search for Jeredy, the adventure-seeking trio discovers Dr. Suno’s work: the mixing together of monster DNA from long ago (dubbed “Monsuno”) with certain elements and genetic material from animals. The Monsunos are housed in small, hourglass-shaped chambers known as cores, and Chase discovers the core that his father left behind for him. Chase eventually learns how to summon his powerful Monsuno, a monstrous polar bear with blue crystals protruding from its back and legs that he calls Lock. Chase and his friends are hunted by the militant S.T.O.R.M. — Strategic Tactical Operatives for Recovery of Monsunos — as well as another mysterious, goateed figure whose identity we don’t learn by the end of the fifth episode. (Starting to sense a theme yet?)

The main characters — brave, impulsive Chase; smart, sensible Jinja; scaredy-cat, comic relief Bren — have a sort of poor man’s Harry-Hermione-Ron dynamic going on. Fortunately, a few of the jokes display a healthy amount of self awareness and are actually funny on purpose. (Upon meeting the mysterious Beyal in Ep. 5/ “Knowledge”, Bren says, “Is it me or does he talk funny?” with Jinja replying, “I think it adds a certain mysterious charm.” The hand-drawn animation is vibrant, but looks rough around the edges at times. (Not a surprise from a show that’s pretty lo-fi in the first place; and the fact that it’s on DVD rather than Blu-ray doesn’t help.) Unfortunately, a lot of the humor is painful and the dubbing is not even close to matching what we see on screen. The good news is I happen to think it adds to the charm of the show, which also has a funky theme song courtesy of Far East Movement.

In my opinion, the strongest episodes in this quintet were the middle three — “Courage”, “Underground” and “Wicked” — because they subtly deepened the mythology of the Monsuno, established the colorful world where the characters live and brought on bigger and badder villains. (Thankfully, Bren and Jinja eventually acquire their own Monsunos to join Chase in battle.) A big problem is those Monsuno battles become very repetitive: Chase starts out losing, but eventually triumphs with the help of his friends or a new skill he acquired; rinse, repeat. The show also clumsily tries to make a point about treating all living things humanely, but it feels forced.

Most importantly, Monsuno: Destiny slams the brakes on the story at an inopportune time. You can make the case that releasing the first five episodes is a smart way of enticing audiences and leaving them wanting more. Though “Knowledge” introduces Beyal and hints at the Monsuno back story, it’s simply not enough of a cliffhanger for anyone who is new to the show to patiently wait for the next batch.

Simply put, I can’t recommend you shell out money for this release when you can probably catch a random two-hour block on Nicktoons and get hooked on the show just as easily. Hopefully, Shout! Factory won’t wait too long between release dates and, in the words of Beyal, “…with this ending, a new beginning.”