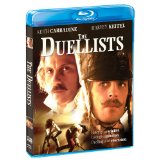 No matter how much you hated Prometheus — parts of it were startlingly dumb, but people who seriously talk about it like it’s the worst film of all time need to take a deep breath — Ridley Scott has a pretty strong case to be included on any list of Top 10 Living Directors. His work has helped redefine genres (Alien, Blade Runner, Gladiator) given us indelible images (that final still from Thelma & Louise) and even provided a few smaller-scale delights (Matchstick Men is my favorite of this group). So I’m proposing we take a quick break from trashing his last movie to discuss his very first one.

The Duellists follows a pair of officers in Napoleon’s Army during the early part of the 19th century. The film opens in Strasbourg with the mercurial Lt. Feraud (Harvey Keitel) critically injuring the mayor’s nephew during a duel. An even angrier general orders the dutiful Lt. D’Hubert (Keith Carradine) to place Feraud under arrest. Feraud is an avid duelist and thinks he did nothing wrong, so he feels insulted by D’Hubert’s accusation. The fact that Feraud is with a woman when D’Hubert arrives to arrest him only adds to his embarrassment. Naturally, Feraud has no choice but to challenge D’Hubert to a duel.

This confrontation leads to more than a decade’s worth of duels between D’Hubert and Feraud. The 1977 film is based on a Joseph Conrad short story called “The Duel”, which itself was based on two real-life French officers who engaged in about 30 duels over 20 years. (They were either perfectly matched or secretly enjoyed each other’s company.)

Early on, we’re told two officers can only duel if they’re in the same place (obviously), if they’re the same rank (which motivates D’Hubert to stay ahead of Feraud professionally) or if Napoleon’s Army is not currently at war. So the idea that D’Hubert and Feraud keep crossing paths even as they bounce all over Europe — from France to Germany to Russia — lets these men (and the audience) know one of them is fated to die at the hand of the other.

At first, I didn’t love the idea of presenting the story almost exclusively from D’Hubert’s perspective. He’s the one we follow as he rekindles a relationship with a buxom old flame (Diana Quick) who worries for his life when the duels become increasingly violent and consume more of his soul. He’s the one we finally see settle down with a younger wife (Cristina Raines). Meanwhile, Feraud is mostly portrayed as an inhuman killing machine and a constant menace that pops up at the most inopportune times. Then I realized these choices were made to illustrate the different reasons these men fight. Feraud has been obsessed with violence for so long, he has lost sight of his humanity. On the other hand, D’Hubert is compelled to fight due to an overwhelming sense of honor. (Before proposing one final duel, one of Feraud’s companions tells D’Hubert, “We have proceeded on the assumption that you are a gentleman” to which D’Hubert responds, “Yes, damn you. Damn you, I am!” because he knows he must accept.)

Carradine, with his lanky frame and laid-back persona, is a very good contrast to the bulldoggish Keitel. The fact that Keitel’s Brooklyn accent sneaks in a few times should be jarring because he’s playing a French officer, but it actually works to differentiate him from the more stately Carradine. Albert Finney, billed as a “special guest star”, appears in a fun cameo as Fouche, the man who is set to execute Feraud following **SPOILER ALERT** Napoleon’s defeat. D’Hubert must convince Fouche to pardon Feraud so they can continue their blood feud. (And because anything else would be uncivilized.)

The film lags a bit early on as the insightful script by Gerald Vaughan-Hughes works to establish the Napoleonic setting and the mindset behind dueling. (Uncredited narration by Stacey Keach also helps get the job done.)

The Duellists, however, truly comes to life whenever Scott stages one of the violent confrontations. D’Hubert and Feraud battle with sabers, epees, on horseback and, finally, pistols. (The results include a chunk of a character’s shoulder and another’s forehead being sliced open.) Scott alternately presents duels as if they were a living painting, a brutal/exhausting street brawl or a deadly game of cat and mouse. He also defuses the tension in one scene by having a character sneeze right before they get started. Each of these sequences is electrifying in its own way.

The Duellists is presented in an aspect ratio of 1.78:1. The 1080p image is arrived at with an AVC MPEG-4 codec at an average of 30 mbps. Though this is an indisputably beautiful-looking film, it’s still a relatively low-budget flick from the 1970s. (Scott says the budget was $900,000.) This means the print contains all the fine, organic grain that typically comes with the territory. However, it also means the image — particularly in close-ups — is not as sharp as we’ve become accustomed to, even with films from the same era. (For example, Jaws — which came out two years before The Duellists — got a sensational Blu-ray upgrade last year.)

There are also a few flecks you’d probably only notice if you were examining the film very closely for critical purposes rather than casually watching it with a friend. Still, the panoramic shots look great (the film’s closing image looks like it could’ve been filmed last month), Scott’s use of natural light and shadow (especially during indoor scenes) comes through very nicely and this is a strong upgrade over the DVD edition.

The DTS-HD Master Audio 5.1 track first grabs your attention when Howard Blake’s terrific, urgent score kicks in. (It’s one of the greatest scores you’ve probably never heard.) I found the dialogue a bit hard to understand at times — though that could be a Me problem — and felt the dynamic range could’ve been refined. Immersion is present in the rears — birds chirping or dogs barking in the distance — without being overpowering. Besides coming to life for Blake’s score, the subs are pretty quiet.

All of the bonus material is presented in HD. The Blu-ray case also comes with a reversible cover featuring the film’s infinitely cooler original poster art.

Audio Commentary with director Ridley Scott: Scott, diving right in without even introducing himself, speaks at length about the early part of his career and every aspect of the production. The director states that 15 years of making (by his estimation) more than 1,000 commercials properly prepared him for his feature film debut. (This was actually his second try at making a movie; his first was a project called The Gunpowder Plot.) He also provides a wealth of technical and anecdotal information about the making of the The Duellists. His favorite story appears to be Raines being unable to suppress her unscripted laughter when she noticed the horse next to her had an erection.

Audio Commentary and Isolated Score by Howard Blake: The film’s composer/conductor takes us through the creation of his fantastic score. Blake discusses the moods and mechanics behind the main and recurring themes, while spending much less time talking about horse erections.

Duelling Directors: (29:09) Director Kevin Reynolds (Robin Hood: Prince of Thieves) sits down with Scott to chat about and watch the film together. Reynolds, who says The Duellists influenced him greatly when he saw it in 1978 and estimates 98 percent of people have never experienced it, respectfully fawns over Scott’s technical prowess. Also features some on-the-set footage, along with clips of Scott winning the Best Debut Film award at the 1977 Cannes Film Festival.

The Story of The Duellists: (24:59) This great interview with Keith Carradine is the only new special feature on the Blu-ray. Carradine refers to The Duellists as a cult film before slyly noting that “cult is a euphemism for a film that didn’t make any money.” The actor speaks articulately and glowingly about Scott (for creating an “illusion of richness” with a small budget) and his co-stars. (Raines was his girlfriend at the time.) This is definitely worth a watch and absolutely deepened my appreciation of this film.

The Duellists is an assured directorial debut by a man who would go on to become a legendary filmmaker. Though I still think there’s a bit of room for improvement on the audio/visual side, this Blu-ray from Shout! Factory is a definite upgrade over any previous edition. It’s also a very worthy introduction for anybody who hasn’t experienced this under-seen gem from the ‘70s.