Posted in: Disc Reviews by Gino Sassani on February 6th, 2013 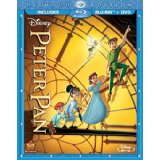 “All this has happened before and will all happen again. But this time it happened in London. It happened on a quiet street in Bloomsbury. That corner house is the house of the Darling family, and Peter Pan chose this particular house because these were people who believed in him…”

In 1953 with a little help from some Walt Disney magic, generations of children, and adults, of course, would learn to believe in the boy who never grew up. Peter Pan began in the imagination of writer J. M. Barrie. He appeared in a number of works from the Scottish author beginning in 1902 with The Little White Bird. The character had always been a favorite of Walt Disney himself, and it was originally intended as his second animated feature following Snow White. It became quickly apparent that the technology wasn’t quite where he needed it to be to tell the story he wanted to tell. It was put on a shelf, but never forgotten. The rights to the character were willed to the children of a Children’s Hospital in London, and it was from there that Walt managed to obtain the film rights for the animated feature we have today. Peter Pan has enjoyed success in pretty much every medium possible. There have been hugely popular stage productions where Peter was usually played by a woman. The character has appeared in film, music, comics, television, radio plays and, of course, printed form. He’s an endearing and certainly enduring character who has now added high-definition Blu-ray to the list.

“Here we go…off to Neverland.”

The story is quite simple. Wendy (Beaumont) is the family expert on all things Peter Pan for the Darling Family. She regales her two younger brothers Michael (Luske) and John (Collins) with the tails of his derring-do. They in turn bring the stories to life in their play. But father believes the stories are getting out of hand, and it’s time for Wendy to finally grow up and leave the nursery bedroom of your young brothers. Her only hope is that Peter Pan will come and save her. She knows that he will because she has found his lost shadow. (Actually, it was the dog Nana who found Peter’s shadow — Baby) In any case, it’s a sure bet that Peter (Driscoll) will return and with a little help from Tinkerbell’s pixie dust, off they all fly to Neverland. Here they’ll encounter magical things like mermaids. Adventures are to be found among the “injuns” and pirates. And, of course, the most feared pirate of them all, Captain Hook (Conried) who lost his hand to a crocodile. That croc is out to get the rest of ol’ Hook. Fortunately, he swallowed an alarm clock and the ticking announces his arrival like a John Williams score heralds the coming of a great white shark.

While Peter Pan did not end up following Snow White, there are some distinct throw-backs to that first Disney animated feature. Hook’s right-hand man is a pirate named Smee, voiced by Bill Thompson, who looks so much like one of the Dwarfs that it’s a bit distracting. Thompson is best known as the voice of Droopy Dog for many years, and you can hear that somewhat in Smee. The animation style is also very much in the style of Snow White. You get the bright colors and somewhat round-headed characters in the band of pirates. That shouldn’t come as much of a surprise, since this was the peak years of Disney’s 9 Old Men.

Peter Pan is also a unique Disney production in many ways. The songs didn’t come from the usual staple of Disney composers. There’s nothing from the Sherman Brothers here. Rather the songs are taken from some of the popular writers of the day like Sammy Cahn with the original score composed by Oliver Wallace. Wallace had been supplying the score to Disney’s shorts since the 1930’s. The songs are traditionally short, and a couple of them have become standards. Most children still sing along to You Can Fly.

Again Disney Studios was making great strides in the art of animation that are still used today. The Disney multi-plane camera setup allowed these features to have an almost three-dimensional feel. While it doesn’t compare with the technology available today, the film’s dimensional qualities remain impressive. Now in high definition it’s easy to appreciate just how much care and detail went into an animated feature that suddenly doesn’t appear as if it were made 60 years ago.

Peter Pan is presented in its original full-frame aspect ratio. The 1080p image is arrived at with an AVC MPEG-4 codec at an average 20 mbps. What strikes me the most about this high-definition image presentation has to be the wonderful colors. They jump from the screen in a brilliance that has not likely been seen for the better part of half a century. High definition only serves to illustrate just how attentive the animation really was. The characters are flawless with wonderfully fluid motions and spectacular backgrounds. There is a distinctive style difference between Neverland and London. London contains a more realistic animation with less color and a bit more gritty texture. Neverland takes on the bright colors and hyper-animated look that allows us to believe these are two very different places. The image is always sharp. Black levels are above average but don’t really figure into this mostly bright image.

The DTS-HD Master Audio 7.1 is quite alive if not extremely aggressive in the surrounds. That’s exactly what you want here. They didn’t have anything but mono in 1953, and the trick here is to make the sound feel full without taking away from the original presentation. Dialog and songs come through quite nicely. The real extra pop here comes from the Wallace score. It has a resounding largeness that certainly couldn’t be felt in its original presentation.

Disney View: This one is always a matter of taste. Artist renditions fill the black pillar bars on your screen. It’s not a purist thing, to be sure. I actually kind of like it. I’m fine with the black bars, of course, but it’s a nifty effort that I tend to use when I watch.

Introduction By Diane Disney Miller: The daughter of Walt Disney gives us a short intro with some inside information. It’s optional.

Deleted Scenes and Songs: There are two scenes and two songs here. All are presented through narration, dialog, and original storyboards.

Growing Up With 9 Old Men: (41:08) This is a wonderful feature. We get to visit with the children of some of the Old Men. These were the core of animators who worked at Disney from the 1920’s some through the 1970’s. Their children are now quite aged, and it’s very touching to hear them talk of their fathers and what it was like to grow up with them. The feature includes plenty of home movies, stills, and unpublished artwork.

It’s hard for me to believe that there are adults out there who have never seen Peter Pan. It should constitute as child abuse to deny your children such a classical experience. Fortunately, it’s a film that can be enjoyed for the first time even as an adult. Disney makes it easy with such a high-quality Blu-ray release. I look forward to the day that all of the classic Disney features are part of my high-definition library. “I’ve waited years for this. That’s not countin’ the holidays, either.”

Gino Sassani is a member of the Southeastern Film Critic's Association (SEFCA). He is a film and television critic based in Tampa, Florida. He's also the Senior Editor here at Upcomingdiscs. Gino started reviewing films in the early 1990's as a segment of his local television show Focus. He's an award-winning recording artist for Omega Records. Gino is currently working on his 8th album Merchants & Mercenaries. Gino took over Upcomingdiscs Dec 1, 2008. He works out of a home theater he calls The Reel World. Favorite films: The Godfather, The Godfather Part II, The Body Snatcher (Val Lewton film with Karloff and Lugosi, not the pod people film), Unforgiven, Gladiator, The Lion King, Jaws, Son Of Frankenstein, The Good, The Bad And The Ugly, and Monsters, Inc.
Flight (Blu-ray) To Rome with Love (Blu-ray)