Posted in: Disc Reviews by Brent Lorentson on April 16th, 2013 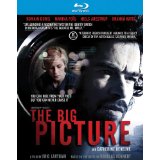 Sometimes a movie comes along that rises above simple entertainment and actually has something to say.  The Big Picture is the kind of movie that has profound ideas about love, family, and the pursuit of your dreams.  Is it possible to really have it all?  The perfect spouse, the perfect family and live out your lifelong passion and dream?  Many who have families, especially when starting young, can understand the idea of sacrifice for their families; it doesn’t mean they just cast their hopes and dreams aside, but once marriage and children are involved the direction your life may take was never the direction you had planned at all.  And it’s this life and compromise director Eric Lartigau thrusts us into.

When we first meet Paul (Romain Duris) he is a happy family man with a beautiful wife, Sarah (Marina Fois), and two children.  Though he is a successful lawyer, his passion is photography.  He continues to snap photos and develop them in his personal lab, but he understands the risk of setting out to be a freelance photographer and simply can’t give up the security of his job with the law firm.  Unfortunately, though, Sarah is not so content with her idyllic life and has dreams of her own as well as other desires she wishes to fulfill outside of the marriage.  As Paul discovers his wife’s infidelity and that it was with a close friend, he begins to crack, and with good reason.  Things only get worse when Paul confronts Greg (the man Sarah is having the affair with); their minor altercation leads to Paul accidently killing him.

What follows is an identity-switch film in the same vein as The Talented Mr. Ripley, though instead of Paul being a murderer he is simply a man trying to escape his life and the crime he’d be connected to so he can become a photographer.  How Paul manages to dispose of the body and make a fresh start is simply a fraction of what makes this a suspenseful thriller but a beautiful piece of filmmaking.  As Paul slides into the identity of Greg, the man who ruined his life, he has the opportunity to fully attempt to fulfill his dream and passion.

As Paul/Greg acclimates himself to the small town he has wandered into, an editor for a local paper sees some of the photos he’s taken and manages to get him a job.  His success continues to grow, and eventually he is even offered the opportunity to show his work in an art exhibition.  With the chance for fame and notoriety Paul sees that it can also be his undoing considering the people running in the same art circles may know the Greg he’s claiming to be is someone entirely different.  And this leads us to the heart of The Big Picture, is it better to be happy with life or enjoy that small window of fame?

The cinematography throughout the film is a thing of beauty.  We are given an array of wide shots throughout the film, with very few moments of close-ups.  For the few close-ups that do appear, these shots tend to be during profound moments where the filmmaker is showing and not telling us what is in our hero’s head.

This is an art house thriller that surprised me and managed to stick with me.  This is the kind of film you could imagine seeing among Alfred Hitchcock’s canon of films and possibly rank up with some of his best work. And I don’t simply throw that acknowledgement around; Lartigau seems to have an appreciation for the thriller genre and delivers a picture that screams to be watched and cherished by filmgoers.

In the end, perhaps one shouldn’t have to go through such elaborate lengths to fulfill their dreams, but the movie has a solid message that perhaps more of us should listen to and appreciate.

The Big Picture is presented in an aspect ratio of 2.35:1. The 1080p image is arrived at with an AVC MPEG-4 codec at an average of 29mbps.  For a film about photographers, as you would expect we are given some beautiful cinematography.  The film starts off gloomy; even in moments with lush vegetation the greens are subdued.  But as Paul finds happiness, we are given a more pleasing color palette.  This is all by design and looks amazing.  The black levels have clear definition, and I couldn’t find any artifacts.  If I had a complaint it would be with the subtitling being yellow; at times it was hard to read, but it only happened briefly and didn’t leave me in the dark on the story.

The DTS-HD Master Audio 5.1 track is in French with English subtitles as I mentioned above.  This is a very subtle track that matches the tone of the film with a very subdued score.  For those who understand French you may be able to tell better than I how clear the dialog is.  This isn’t a film that needs a robust soundtrack to move the story; it’s about the images and the interactions with people.  To sum it up, it’s rather unremarkable.

Of all the titles I’ve had the chance to review for the site, on a personal level this is one of my favorite films I’ve had the chance to review.  By no means is it perfect, but as an amateur photographer and getting older, well, I couldn’t help but relate to this film.  As a fan of foreign and art house films this is a film that catered to my highbrow proclivities.  For those of you looking for a smart thriller that has class and depth, this film is what you’re looking for.

Brent Lorentson is a horror writer and film critic based out of Tampa, Florida. With a BA in Digital Film, he co-wrote and co-directed Scavenger Hunt. His short stories have appeared in various horror anthologies. In 2019 his short script Fertile Blood will be a part of the anthology horror film Slumber Party. He is currently working on his first novel A Dark and Secret Place set to be released in late 2019. Favorite Films: Taxi Driver, Fight Club, I Saw the Devil, The Wild Bunch, Dawn of the Dead, A Clockwork Orange, Pulp Fiction, Heathers, The Monster Squad, and High Fidelity.
John Dies At The End A Monster In Paris (Blu-Ray 3D)