A Monster In Paris (Blu-Ray 3D) 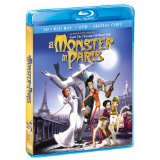 The computer-animated feature film has reached the point where you don’t have to be one of the big boys to play. While Pixar and to a lesser extent Dreamworks have dominated this feature form pretty much since its inception, there have already been a handful of independent films that have managed to leave their mark on the landscape. Now the foreign market is getting into the act as well. A Monster In Paris, or Un Monstre a’ Paris, is the result of that evolution.

The story is a rather weak one, to be sure. It’s 1910, and there is a creature running around the streets of Paris. It is the result of a flea’s exposure to a scientist’s formula to make things grow. Like all of the good monster films of the Universal era, this monster is terribly misunderstood and doesn’t want to hurt anyone. He is attracted to a theatre where Lucille (Paradis) is the featured singer and performer. The flea makes himself known to her, and instead of acting in fear, Lucille embraces the flea’s musical talents. Together they take the stage by storm.

The “monster” isn’t the only problem facing Paris. The streets have been flooded to the point where one needs boats to navigate them. Commissioner Maynott (Huston) and his annoying sidekick Investigator Pate (Balaban) are using the fear of the monster to advance Maynott’s run for Mayor. Of course, he’ll stop at nothing to get the creature, and in a way that creates a public display of his heroism.

Lucille enlists the help of her friends to protect the flea. Emile (Harrington) is the theatre’s film projectionist and is smitten with ticket-taker Maude (Zima). There’s also his friend Raoul (Goldberg), who is a deliveryman and amateur inventor. They are also helped by a monkey found in the scientist’s lab who communicates by flashing cards with his dialog.

The plot is rather thin and consists mainly of the mad-cap antics you might find in a vintage Tom and Jerry cartoon. The cat and mouse games are interrupted only long enough to feature a couple of musical numbers, most notably with Lucille and the flea whom she has named Francoeur.

It wouldn’t be fair at all to attempt to compare the film with anything coming out of Pixar, of course. Still, I was rather impressed with the production design which often featured a Burtonesque style with spindly-legged characters. The limitations of the low budget aren’t as obvious as you might expect. The 3D work was actually quite natural, and it wasn’t very hard at all to get lost in the animation. There’s an almost stop-motion feel to the project that allows the budget limitations to actually contribute to the overall artistic style of the film. Characters moved smoothly, and the Paris backgrounds were rather impressive.

While this is primarily a French production, it is not entirely accurate to label it a traditional foreign film. It was directed by Bibo Bergeron who is no stranger to Hollywood projects. Both A Shark’s Tale and the Elton John-led Road To Eldorado are absolutely as mainstream as it comes. Voice actors include both French and English names. I’ve attached characters above to the English version. There you’ll find names like Jay Harrington and Danny Huston. Vanessa Paradis voices Lucille in both versions, which retains the integrity of the musical performances. The same is true for the limited vocals of our monster played by Mathieu Chedid on both versions.

It’s a strange tale, to be sure. I’m not sure it will resonate with American audiences. It is a rather inexpensive 3D title to add to your children’s library, but I don’t suspect it’s one they’ll be asking to watch over and over again. Maybe a good solid rental is exactly where this quaint little feature fits on a rainy day.

A Monster In Paris is presented in its original aspect ratio of 1.85:1. The 1080p 3D image is arrived at with an MVC codec at an average 20/10 mbps. The high-definition image presentation is pretty solid. I was particularly impressed with how lighting and shade works on this film. You see wonderfully accurate reflections in surfaces like a film can. Shadows are also very impressive here. Colors often pop and contain the vivid child-friendly shiny look. The 3D here is not gimmicky at all. It serves merely to enhance the immersive nature of your experience.

The DTS-HD Master Audio 5.1 is alive best in the musical numbers. I didn’t find the pieces to be exceptional compositions, but I did rather like the sound quality. There’s some acoustic guitar work that sounds simply amazing. Dialog is clear at all times. This isn’t a particularly aggressive surround mix. Still, there are some nice street sounds that filter in from time to time.

The film has a very short 87 minute running time, so that it manages to tell the simple story with its musical flourishes before it has time to lose our attention. The film certainly proves one point. Computer-generated animation features don’t need to be huge milestone productions. Today the technology is there for almost anyone to play with. That should lead to even more creativity on all levels of budget. “What’s so complicated?”

Gino Sassani is a member of the Southeastern Film Critic's Association (SEFCA). He is a film and television critic based in Tampa, Florida. He's also the Senior Editor here at Upcomingdiscs. Gino started reviewing films in the early 1990's as a segment of his local television show Focus. He's an award-winning recording artist for Omega Records. Gino is currently working on his 8th album Merchants & Mercenaries. Gino took over Upcomingdiscs Dec 1, 2008. He works out of a home theater he calls The Reel World. Favorite films: The Godfather, The Godfather Part II, The Body Snatcher (Val Lewton film with Karloff and Lugosi, not the pod people film), Unforgiven, Gladiator, The Lion King, Jaws, Son Of Frankenstein, The Good, The Bad And The Ugly, and Monsters, Inc.
The Big Picture (Blu-ray) Magic Journey to Africa (Blu-ray 3D)