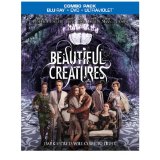 The conclusion of the wildly popular Twilight saga last fall left a nation of haters high-fiving each other, but it also created a giant, heart-shaped vacuum in Hollywood. Where is the industry’s next big young adult-oriented, human-on-supernatural romance franchise going to come from? This past Valentine’s Day was as good a time as any to find out if Beautiful Creatures — based on Kami Garcia and Margaret Stohl’s “Caster Chronicles” series — was up to the task.

Ethan Wate (Alden Ehrenreich) can’t wait to get out of Gatlin, South Carolina. Thanks to some nimble narration, Ethan explains why he feels trapped in his fictional dead-end town, where virtually every important piece of literature is on the banned list and people enthusiastically re-enact the Civil War as if they’re expecting a different result. Ethan’s spirits brighten when he meets moody outsider Lena Duchannes (Alice Englert), who is literally the girl of his dreams. You see, Ethan has been having the same dream every night about a mysterious dark-haired beauty; unfortunately, he always dies at the end. After a rocky start (is there any other kind?), the two grow closer and Ethan discovers that Lena is a witch.

Actually, Lena informs him they prefer to be known as “casters” because calling them witches is like calling smart kids “geeks.” She also has a cool tattoo on her hand that doubles as a countdown to her 16th birthday. Once the increasingly powerful Lena turns 16, she will either be claimed for the Light or the Dark. (Cut to any parent of a teenage girl nodding sadly.) Apparently, male casters can choose which side they claim, while females don’t have that luxury, which we can safely file as Reason #963 of Why Guys Have It Easier Than Girls.

To be honest, I wasn’t too optimistic about this film’s prospects after the first act. Ehrenreich’s Southern accent was so jarring; even Forrest Gump was having a hard time staying focused on what Ethan was talking about. The film also re-visited some well-trodden stereotypes about the south (mostly personified by Ethan’s close-minded ex). However, as the film progressed and we learned more about caster mythology, I found myself becoming more immersed and invested in Ethan and Lena’s connection. Plus, it turns out Ethan’s goofy accent is part of his charm.

Of course, things really picked up as soon as Jeremy Irons stepped on screen as Macon Ravenwood, Lena’s disapproving uncle. Casters, we’re told, generally try to keep their existence a secret, but Irons’ eccentric wardrobe and wonderfully bananas performance don’t really fit a man who is supposed to be hiding. It’s fun to watch Irons — who still has one of the most magnetic speaking voices in the business — spar with Emma Thompson, who plays a surprisingly powerful antagonist from Gatlin, because fewer things delight me more than overqualified British actors classing up a junky fantasy film. Speaking of overqualified actors, Viola Davis plays Amma, who serves as a guardian for Ethan. (In the film, Amma is a combination of the same Seer character from the books and Marian the librarian.) There’s a scene late in the game where one of the main characters makes a difficult sacrifice, and Davis’ nearly wordless reaction shot is the best bit of acting in the film.

Then again, the whole enterprise would fall apart if Ehrenreich and Englert didn’t hold up their end of the bargain. The two relatively inexperienced actors are a relatable and appealing duo. In other words, they look like real teenagers rather than over-stylized movie stars trying to convince us they’re regular small-town folk. Ehrenreich — I can barely type it; please don’t ask me to say it — could believably play a jock but brings a pleasing, underdog vibe to Ethan. Englert is even better. Even when the actress has to play typical teenage moodiness early on, there’s a real fire and hurt behind her abrasiveness. Englert goes on to convincingly portray the gradual collapse of the walls around her heart as her love for Ethan — which she tries to fight in the event she becomes evil and kills him — grows.

Director/writer Richard LaGravenese deserves a lot of credit for guiding his two young performers through some tricky waters. (The Eye-Roll potential for this sort of romance is always off the charts.) The filmmaker is best known for his writing — earning an Oscar nomination for his Fisher King screenplay — and most recently directed 2007’s P.S. I Love You. Unfortunately, this also means LaGravenese has almost zero experience helming a production of this scale (which is still relatively modest by blockbuster standards). Too many of the effects are distractingly shoddy, and I have serious reservations about using the word “special” to describe them. I also wish LaGravenese had cut to black 15 seconds before he did at the end of the movie and left a little to the viewer’s imagination.

Beautiful Creatures is presented in its original aspect ratio of 2.40:1. The 1080p image is arrived at with an AVC MPEG-4 codec at an average 30 mbps. The high-definition transfer does a pretty solid job of balancing the charming South Carolina atmosphere set in the realistic world with the fantastical world of the casters. There is a bit of a mixed bag when it comes to the film’s texture. There is a nice element of grain present, but the film doesn’t always appear so filmic. There is some loss of detail and a few digital blurrings in some background material, while close-up images are sharp and brimming with detail. Black levels don’t impress much here, as they appear to be soft and lack a ton of shadow definition.

The DTS-HD Master Audio 5.1 is alive during the more supernatural elements of the film. That’s when surrounds come alive as well as some fair sub movement. However, the normal scenes feel rather flat. The score is the only thing that gives these scenes any real dynamic life at all. Sure, dialog is clear, but it never really pops at all. Perhaps this was an artistic choice in order to even more separate the atmosphere of the two worlds. If it was, it was taken too far, and thank heaven for the sweet score.

The extras here leave me feeling a little angry at what studios do with their “not-so-special” features. The behind-the-scenes material is broken up into several 3-4 minute pieces that are over half filled with the same clips over and over again. It gets tedious to have to work the control after every few minutes of material. I understand there are royalty concerns, but must we see the same clips so many times in such short features? We did just watch the movie, after all. All of the material is in high definition.

Book To Screen: (3:58) Cast and crew join the authors in talking about the process of taking the material to the screen.

The Casters: (3:22) Cast and crew describe the magical characters and the part they play in the story.

Between Two Worlds: (4:17) Again there are more character descriptions.

Forbidden Romance: (3:12) And yet even more character descriptions. Can someone tell me why these three features could not have been put together? Of course, the studio wants to be able to list a ton of features on the back cover. What was I thinking?

Alternate Worlds: (5:17) The longest feature looks at the f/x

Designing The Costumes: (3:51) A look at the costumes.

Deleted Scenes: There are four with no play-all option. That means manning the remote again to click after each one. Another homage to tedium.

In the immediate future, Beautiful Creatures makes for a solid date night option. YA fans can swoon over the romance, while the guys who got dragged along can enjoy the sight of Emmy Rossum (as Lena’s older, Dark Caster cousin Ridley) in a variety of provocative outfits. In a more big-picture sense, Beautiful Creatures may be far from flawless, but it manages to hint at a larger story — and a potential franchise, since there are currently three additional books to draw from — while being entertaining in its own right.