Posted in: Disc Reviews by Jonathan Foster on May 20th, 2013 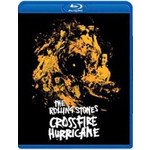 Ever since they came on the scene in the ‘60s, The Rolling Stones have done things in their own unique and unapologetic style. Widely regarded as the anti-Beatles, The Stones’ blues-infused rock music spoke to many people and inspired many a future musician. They personified the era of sex, drugs and rock & roll…especially the “drugs and rock & roll” part.

The Rolling Stones: Crossfire Hurricane is not your average documentary film, but the band is anything but ordinary. Taking its name from their hit, “Jumpin’ Jack Flash”, Crossfire Hurricane covers the highs and lows of the Stones’ experiences during the ‘60s and ‘70s. The film contains vintage concert, interview and news footage overlaid with a current interview involving the remaining living members of the band (past and present). Mick Jagger, Keith Richards, Charlie Watts, Mick Taylor and Ronnie Wood discuss everything — from songwriting and drugs to performing at crazy concerts — in an open manner, leaving no topic or question unanswered.

That openness is what makes this documentary work. It would have been easy to just slap some classic footage and newsreels together, and have someone with a good voice narrate this film, Behind the Music–style. By having band members talk about specific events as they are being played out on screen, it not only puts the event in context, but also makes you feel like you’re experiencing it with the guys. On top of that, the stories they tell are the kind that can only be told by the ones who lived it. There are a lot of crazy times, to be sure, but there are more than a few reality checks for the band, such as Richard’s drug trafficking arrest in Vancouver and the death of original member Brian Jones. I appreciated how open the band was discussing the hard topics — especially concerning their drug use — with Taylor admitting it was Richards’ drug use that drove him from the band. Jagger’s voice got noticeably choked up when talking about Jones’ death, coming just days after the rest of the group kicked him out for being too high to be a functional part of the band.

Lest you think it’s all heavy stuff, there are several hilariously candid moments in this film. The most notable include Jagger’s Elvis impersonation (which is remarkably good) and his comment that when the concerts would get too loud and he couldn’t hear himself sing, he’d just sing the lyrics to “Popeye, the Sailor Man” to see if anyone would notice. I also enjoyed watching Jagger and Richards write songs together. It was really fascinating to watch. While I’m sure there’s still a variety of concert footage laying around, this candid stuff is absolutely golden and a real treat.

The whole film is one big Rolling Stones soundtrack, which is great. The songs are fitted to the events occurring on screen; hyper and crazy during the fateful free concert at Altamont, quiet and slow when dealing with the death of Brian Jones. While the film puts you in the mindset of the time, the music is what keeps you there. I’m a Stones fan, but there was some music featured here that I hadn’t heard. It was exciting to discover more music I really liked.

The Rolling Stones: Crossfire Hurricane is presented with an aspect ratio of 1.78:1. The 1080p image is achieved with an AVC MPEG-4 codec at an average of 20 mbps. I was pleasantly surprised with the quality of the video, especially the concert footage. The film used in this documentary is remarkably well-preserved. Granted, there were a few grainy spots, but most of the stuff from the ‘60s looked pretty good for black and white film shot more than 50 years ago. Taking into account the age of the film, the color footage came out pretty good as well. The stuff from the ‘70s looked pretty trippy, especially during the concert where Jagger has Native American war paint on his face and keeps charging the camera. While this is great for the concerts and newsreels, it is a drawback when Richards decides to moon the camera, which is often.

The DTS-HD Master Audio 5.1 track serves this film well. Everything is incredibly balanced. Between the music, the footage and the overlaid interview, there were many places where something could have gone wrong. However, nothing is lost. When the modern-day Stones are talking, the music and audio from the vintage footage fade to the background. You can still hear it, but it becomes an accompaniment to the interview. Everything on this Blu-ray is crisp and clear, and I didn’t ever have to turn on the subtitles to understand Richard’s mumblings. You could probably listen to this film with your eyes closed and still enjoy it. In fact, I recommend it. You’ll feel like you’re at a Stones concert.

The Arthur Haynes Show 1964: (4:53) TV footage featuring performances of “I Wanna Be Your Man” and “You Better Move On.”

Interview with director Brett Morgen: (10:48) Morgen answers questions about the film. He also discusses finding the lost footage and what it was like to interview Jagger.