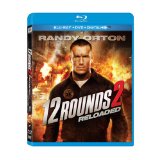 “Now, this game has 12 rounds. You win more than you lose, I turn myself in. You don’t, a lot of people die including you. If you refuse to cooperate, people die. If you make any attempt to contact the police, people die.”

I’m usually pretty skeptical when it comes to movies that are made by any of the various fighting federations out there. W?? usually stands for “What The F***”. I get it. There are a lot of tough guys out there who would like to follow in the footsteps of guys like The Rock. But for every successful transition to acting there are a hundred stories of mindless muttering substituting for actual… I don’t know…. words. The idea is if enough guys beat up enough other guys we’ll take the necessary testosterone injections to come along for the ride. Did I mention I hate needles? Still, I actually quite enjoyed John Cena in the original 12 Rounds and gave it a pretty respectable 3.5 in my review back in 2009. It’s taken someone four years to figure out that the title has yet to be mined for another outing. Take away John Cena, director Renny Harlin and a guest cast that included the likes of Ashley Scott, and I found myself wishing that whomever that certain “someone” was would have contracted a serious case of amnesia.

Nick Malloy (Orton) is an EMT who is out on the town with his wife Sarah (Busby). After spending a few minutes with really bad dialog intended to demonstrate just how much these two lovebirds adore each other, two cars come tearing down the street and crash practically at their feet. Nick goes into his EMT rescue bit and manages to save two of the three victims. The wife of one of the drivers dies in spite of Nick’s heroic attempts to save her.

It’s exactly one year later, and Nick and his partner are called to a rather odd rescue situation. The victim has a bomb sewed into his body, and before it is activated Nick gets a call on his cell phone from a guy named Heller (Markinson). It doesn’t take long for us to realize that Heller is the surviving husband and that the drunk and high driver who killed his wife had political connections and got off with a slap on the wrist. Now he’s out for revenge on everyone he blames for the injustice. Nick is going to be the instrument of that revenge…sort of. Heller threatens to kill not only Nick but his wife.

He challenges Nick to a 12-round game. If Nick wins more rounds than he loses, Heller will turn himself in. If not, Nick will join the body count that sums up Heller’s revenge. What we get from that point on are a series of tasks with short clocks that take Nick throughout town, eventually meeting up with the remains of the various folks Heller holds responsible.

We’ve seen these crazy revenge villains all of the time. Brian Markinson actually lends a little life to the portrayal, but it’s the clichéd dialog that kills him at every turn. None of the challenges are very clever or unique. In fighting there is an issue when a fighter telegraphs his punch. The movie does more than telegraph each move. It takes out a huge full-page ad out on each frame. The end result is I stopped caring at all about any of these guys 20 minutes into the movie.

I’m sure that Randy Orton is a fine WWE Smackdown entertainer. He has the body type, and there’s no question he could kick my behind in a fair fight. He could kill me in an unfair fight. That’s all just great in the ring. But here he’s trying to sell us that he’s a pretty smart EMT, and I’m just not buying. Watching this guy try to do medical stuff is more painful for the audience than the guy getting butchered in the film. His idea of emoting consists of staring at a guy for 35 hours to see who blinks first. Again, I’m sure he’s a great athlete and entertainer in the ring. Movies? Where the heck was that towel again?

So you’d think the film would at least blow you away with cool stunts and car chases. You’d think that, but you’d be wrong. The car sequences look like they filmed this stuff at 10 miles per hour and sped up the film. One of the car flips has to happen off-screen with only sound effects to describe what happened. The funny thing here is that the guys who made the film brag about this cheat in the extras. Most of those go pretty much, “We didn’t really do anything on the screen, but if you use your imagination and a few sound effects, WOW”. The fight scenes look obviously staged, and none of the bad guys really put up much of a fight. Now, I can’t say that I blame them. I’d go down pretty quick for Randy Orton as well. But this is supposed to be adrenaline-pumping action. I felt like the actors should have been issued walkers just to make it fair. Action junkies won’t get their fix here. Combine that with poor production and amateur acting and you have the seeds for a disaster film…without the alien invasion or tidal wave.

12 Rounds 2 is presented in its original aspect ratio of 1.78:1. The 1080p image is arrived at with an AVC MPEG-4 codec at an average 20 mbps. This thing was filmed mostly at night with very poor lighting. They don’t even make good use of source lighting like headlights or street lamps. With poor black levels that should really be called grey levels the film is a muddy mess from beginning to end. There’s plenty of digital noise, and I can’t for the life of me see why that should be.

The DTS-HD Master Audio 5.1 is yet another victim of low budget and unimaginative production design. There is very little that doesn’t come directly from the front mains. The explosive scenes are anything but. You’ll have to kick your sub if you want it to move at all during the film. Sure, dialog is clear, but it’s all rather muddy, hanging out dominantly in the mid-ranges.

The Audio Commentary with Director Roel Reine allows me to have some sympathy for the guy. He has a lot to say about the low budget. I get the impression even he is not very happy with the results. I don’t get any sense of excitement or pride here.

Randy Orton – Reloaded: (8:12) Randy’s not a modest guy at all. He quite easily refers to himself as a superstar, and everyone else on the cast and crew appears to buy into it.

I don’t mind a little low-budget mindless fun. I at least want the cast and crew to look like they’re trying. I just get the sense that everyone’s phoning it in here. A huge disappointment from what I consider to be a pretty solid film in the original. The only connection is the 12-round game with no characters or references to the previous outing. There are also terrible glaring continuity issues in the movie. The director acknowledges them in his commentary, but no one appears too worked up about any of these mistakes. If you don’t care about your movie, why should I? The only thing I can safely say about this director is, “This guy likes bombs”.

Gino Sassani is a member of the Southeastern Film Critic's Association (SEFCA). He is a film and television critic based in Tampa, Florida. He's also the Senior Editor here at Upcomingdiscs. Gino started reviewing films in the early 1990's as a segment of his local television show Focus. He's an award-winning recording artist for Omega Records. Gino is currently working on his 8th album Merchants & Mercenaries. Gino took over Upcomingdiscs Dec 1, 2008. He works out of a home theater he calls The Reel World. Favorite films: The Godfather, The Godfather Part II, The Body Snatcher (Val Lewton film with Karloff and Lugosi, not the pod people film), Unforgiven, Gladiator, The Lion King, Jaws, Son Of Frankenstein, The Good, The Bad And The Ugly, and Monsters, Inc.
The Dragon Pearl Charlie Zone (Blu-ray)