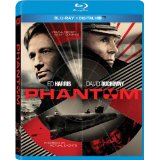 “There are only two reasons why a boat would go rogue. One is to defect, and the other is to start a war, and I don’t think we’re defecting. ”

Inspired by true events; Ed Harris is Soviet Captain Demi, son of a legendary Soviet, on the verge of retirement. Haunted by a mistake that happened years ago, a mistake that cost several lives, a mistake that would have ended his career had it not been for his family’s name, Demi is weary and ready for the end. However, before he is to be granted his retirement, he is tasked with one final voyage. Albeit reluctant, Demi accepts this final mission despite only having just returned from a recent deployment.

As he and his crew prepare to ship out, two last minute additions from the Special Projects Institute are to be brought aboard in order to test new prototype equipment. One of the two men, Bruni (David Duchovny, Californication) offers salutations of recognition to Demi who does not seem to remember the man. Demi along with his second–in-command Alex Kozlov (William Fichtner, Crossing Lines) are weary of the two.

Almost right away, Bruni begins to alert Demi’s suspicions as he begins to make odd requests such as Demi putting the submarine directly underneath a foreign freighter where as standard protocol would be to avoid the freighter altogether to keep from being detected. The reasoning for Bruni’s requests is soon revealed to be for his new prototype equipment, Phantom, a device capable of camouflaging the Soviet submarine’s signal as that of another country, making the Soviet virtually undetectable. The test proves a success; however, it immediately becomes clear that the purpose for bringing the Phantom on the sub was for more than a test. Taking control of the ship and imprisoning Demi and the crew, Bruni intends to use it to launch an attack and mask his involvement, thus starting nuclear war. With the clock ticking, Demi must find way to escape and prevent Bruni’s attack before he can start the apocalypse.

The first thing that you notice when watching the film is that though this is a picture told from the perspective of the Soviet Union, none of the actors speak with Russian accents. That is probably my biggest and only peeve about the movie (the reason for the lack of accents is explained by the director in the audio commentary), which I found to be an interesting and thrilling tale. Ed Harris is the consummate professional that you expect him to be, and Duchovny continues to prove that he is much more than a television actor. The two expertly drive the story forward and stave off the audience becoming bored.  The two leads are more than enough to spearhead the movie, but it’s always nice to have backup, and they have plenty of that: William Fichtner, Lance Henriksen, and Jonathan Schaech, and Sean Patrick Flanery; talk about star power.

The driving force of the film is its authenticity, as filming took place aboard an actual submarine. That is my favorite aspect of the film. You want a real performance from your actors? Make the environment around them as real as possible.

Phantom is presented in an aspect ratio of 2.35:1. The 1080p image is arrived with an AVC MPEG4 codec at an average of 19 mbps. A prime example of the quality of work that can be done despite not having a big budget; filming on an actual submarine provided the much-needed amount of detail and texture necessary to pull off something of this nature. The CG for exterior shots of the submarine is top-tier and as good as looking at the real thing.

The DTS-HD Master Audio 5.1 track is one of the high points of the film, every sound and piece of dialog completely discernible and with none being lost. The score does possess an authentic and immersive effect, as Jeff Rona used original sounds from the very sub to make up the fundamentals of the film’s score.

There is an audio commentary track featuring Writer/Director Todd Robinson doing the introduction where he speaks of the genesis of the project. About a minute into the commentary he introduces Ed Harris, and two together chat about various experiences during production and cast mates such as how Lance Henriksen (Millennium) got involved with the project, filming with a low budget and making it look like a big-budget film, and the lack of accents used by the actors.

Facing the Apocalypse (12:58): Making-of featurette with interviews with Writer/Director Todd Robinson, Ed Harris, and David Duchovny. Robinson takes the audience through an in-depth summarization of his childhood (complete with photos) of growing up during the Cold War era with his father who built bomb shelters for others, which was catalyst for how he came up with the idea. The cast and crew talk about the experience inside a submarine and Robinson’s hands-on approach.

The Real Phantom (06:04): The Director talks of the K129 submarine that inspired the film. The K129 was a ballistic missile submarine that went to sea and sank in the winter of 1968. Research showed that the course the submarine was meant to take and where it was ultimately found were not consistent, which created much speculation that the crew of the sub had gone rogue before their demise. Quite informative.

Jeff Rona Scoring Phantom (3:00):  Rona talks about his experience on the submarine where the movie was filmed. During his time on the sub, Rona speaks of how he was intrigued by the authentic sounds he found that already existed on the ship and decided to use them to make up the fundamental parts of the film’s score.

An Ocean’s Away Music Video (2:54): Every film needs a theme song, and here’s the one for Phantom. It’s a bit brief and not exactly my taste but still an interesting video.

The director spoke of not having that big a budget for this film, but it appears that he made the money he had work for him. The film visually is on par with any other big-budget production I have seen.

Jeremy Butler is a film school graduate of the International Academy of Design and Technology. He is been writing for Upcomingdiscs since 2012; however, movies have played a big part of his life for much longer. Favorite genres include horror, science fiction/fantasy, and comedy. Favorite movies are V for Vendetta, Boondocks Saints, Kiss Kiss Bang Bang, and The Godfather.
The Dick Van Dyke Show: Season 4 (Blu-ray) Portlandia – Season Three