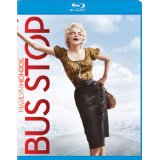 For most modern moviegoers, Marilyn Monroe is probably more “famous for being famous” than she is for her cinematic body of work. (Of course, she’s also infinitely better known for an entirely different “body of work.”) That’s not totally fair because Monroe has at least one bona fide classic (Some Like It Hot) and a handful of indisputably indelible images among her movie credits. Those of you interested in exploring her filmography are in luck: Fox has just released two titles from her mid-1950s superstar peak on Blu-ray, including her turn as an ambitious showgirl in Bus Stop.

The film quickly introduces us to Beauregard “Bo” Decker (Don Murray), a naïve and socially tone deaf cowboy. For the first time in his life, Bo is venturing out of the Montana ranch where he was raised to compete in a rodeo in Phoenix. Bo’s friend and father figure Virgil (Arthur O’Connell) tries to encourage the 21-year-old man-child to find a nice girl to settle down with, but Bo is only interested in finding his one perfect “angel.”

Enter Cherie (Monroe), a saloon performer with big dreams who is stuck singing songs to a roomful of drunk cowboys that aren’t paying attention. Bo sees her, and it’s love at first sight. He repeatedly and forcefully insists he’s going to marry a baffled Cherie and…well, that’s pretty much the entire movie: Cherie desperately fending off Bo’s increasingly obnoxious advances until an unconvincing ending designed to send 1950s moviegoers home with a smile on their faces.

In other words, this film — based on two William Inge plays, “Bus Stop” and “People in the Wind” — has aged terribly. I wasn’t around in 1956 when this film opened, but I’ve got to believe Bo’s stubborn, loud-mouthed shenanigans were much more acceptable — and maybe even endearing — than they are today. (The scene where Bo literally lassoes Cherie is cute, I suppose; Bo’s persistent manhandling of Cherie is not. At all.) As it stands, I honestly feel like any half-decent YouTuber could easily re-cut Bus Stop into a dark thriller about an abrasive cowboy who stalks a terrified blonde woman and forces her to marry him.

It’s a shame because the movie features a strong performance from Monroe, who was still in her prime as a movie star and worldwide phenomena. Bus Stop was the first film she worked on after studying at the Actors Studio in New York, and I was impressed by her ability to convincingly play a woman who is pretty busted. (Especially when you consider Monroe was probably the most glamorous celebrity in the world.) Naturally, Cherie performs a song (“That Old Black Magic”), and Monroe — whose wheelhouse was musical comedies — makes her singing intentionally bad. She also does a nice job playing up Cherie’s (and the audience’s) exasperation with Bo.

Murray actually made his film debut in Bus Stop, and earned a Best Supporting Actor Oscar nomination. The fact that I’ve been totally trashing the Bo character isn’t really Murray’s fault. I suspect the actor played the character just as director Joshua Logan (Mister Roberts, South Pacific) intended. If I told you Murray was overacting, I still feel like I’d be underselling it. He does have his moments: for example, I was entertained by Bo’s insistence on pronouncing Cherie’s French-sounding name as “Cherry.” Thankfully, O’Connell is a pleasing, sturdy presence as the paternal Virgil. The film also features a colorful supporting cast of characters — including flirty diner owner Grace (Betty Field), dutiful bus driver Carl (Robert Bray) — and marked the film debut of Hope Lange (Peyton Place, The Ghost and Mrs. Muir). Many of them participate in the film’s final act, which is set in a diner that doubles as the titular bus stop. Unfortunately, the static way these scenes are presented — the characters are stranded by a snow storm during a bus trip — easily reveal the material’s stage origins.

A more cynical viewer could try to draw parallels between Monroe and Cherie, a woman of questionable talent with big showbiz dreams. But after watching Monroe’s take on two very different roles (see Niagara), I think it’s time to give the icon her due as an actress.

Bus Stop is presented in an aspect ratio of 2.55:1. The 1080p image is arrived at with an AVC MPEG-4 codec at an average of 33 mbps. I realize I should be judging this disc on its own merits, but it’s almost impossible not to compare this transfer to the other Monroe title Fox has just released on Blu-ray. Niagara probably has an unfair advantage because it was filmed in Technicolor, so it’s no surprise the presentation for Bus Stop is rougher and grainer. Fortunately, that look actually works for a story that mostly takes place in a dingy saloon, a rodeo arena, and a greasy spoon diner. The unconventional aspect ratio isn’t really noticeable, and the image is at its best in presenting the various flesh tones. (Bo and Virgil’s tanner skin vs. Cherie/Monroe’s alabaster complexion.) There are no signs of noise reduction; for better and worse, the film very much still looks like it was made in 1956.

The DTS-HD Master Audio 4.0 track suffers even more when you compare it to what Fox did with the dynamic track for Niagara. Here, the rear speakers are never heard from. Meanwhile, the subs only chime in briefly during musical performances, including “The Bus Stop Song” by The Four Lads. There also appeared to be some synch issues, particularly with Virgil’s dialogue. I suppose I should be glad the track isn’t more muscular; Bo could’ve probably blown out my speakers singlehandedly with his constant hooting and hollering.

Trailers: Includes the original theatrical trailer (2:25), as well as previews for other Marilyn Monroe titles: Niagara, Gentlemen Prefer Blondes, How to Marry a Millionaire, River of No Return, The Seven-Year Itch and Irving Berlin’s There’s No Business Like Show Business. Features a Play All option for the other Monroe movie trailers. Presented in standard definition.

Bus Stop is actually supposed to be more of a dramatic film, but the dated story — and Murray’s annoying performance — make it all but impossible to take this movie seriously. Fortunately, the film features some catchy music and another impressive performance from one of the most iconic screen sirens of all time. (From a time when attractive actresses were still called “screen sirens.”)

If you can only afford to see one Marilyn Monroe title out on Blu-ray this week, I urge you to skip this one and pick up Niagara instead.