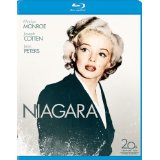 For most modern moviegoers, Marilyn Monroe is probably more “famous for being famous” than she is for her cinematic body of work. (Of course, she’s also infinitely better known for an entirely different “body of work.”) That’s not totally fair because Monroe has at least one bona fide classic (Some Like It Hot) and a handful of indisputably indelible images among her movie credits. Those of you interested in exploring her filmography are in luck: Fox has just released two titles from her mid-1950s superstar peak on Blu-ray, including her femme fatale turn in Niagara.

Monroe stars as Rose Loomis, who is visiting Niagara Falls with her older, jealous, volatile husband George (Joseph Cotten). When the film opens, Rose and George are staying in a cabin reserved by Polly and Ray Cutler (Jean Peters and Casey Adams), but the Cutlers agree to take another room and give the seemingly troubled couple some space. Turns out George has good reason to be jealous: during a tour of the Falls, Polly spots Rose making out with another man. Eventually, we learn Rose and her lover plan to kill George and run away together.

The film has many elements of a classic Hitchcock thriller, including a murder plot gone awry, conspicuous staircases, and, of course, an irresistibly icy blonde. However, director Henry Hathaway (who went on to direct John Wayne’s True Grit) infuses this entertaining, colorful film noir — yes, I realize “colorful film noir” is sort of an oxymoron — with a style of his own.

Niagara takes full of advantage of both its majestic setting and its burgeoning superstar. The film opens with a voiceover from George bemoaning his smallness compared to the Falls, and cinematographer Joe MacDonald captures some breathtaking shots of the natural wonder. (Then again, there are also some decidedly less breathtaking and outdated special effect shots along the way.) Then again, the film’s most mesmerizing visual effect is arguably Marilyn Monroe.

Monroe, earning first billing for the first time in her career, appears in a variety of body-hugging outfits and various states of undress. The only thing she’s wearing in her very first scene is a bed sheet. Although she would go on to win the most acclaim for her comedic/musical chops, Monroe slips easily into the role of femme fatale. (She does get a brief musical moment, crooning along to a tune called “Kiss”, which ends up being an important part of the plot.) Although she sizzles on screen — all the male characters are amusingly open with their leering — she doesn’t achieve the same amount of heat with Cotten or any of her other scene partners.

Cotten (The Third Man) does good work as an unstable protagonist who we’re not quite sure we should root for. The closest thing to a hero in the story is kind-hearted Polly, played with aplomb by Peters. Her gentle presence is a(n unintentionally) funny contrast to Adams’ work as her obnoxious husband Ray. The film is only 89 minutes long, but the story is relatively simple and straightforward. So Hathaway still has time to let certain sequences breathe — including a crucial chase inside a bell tower — and play out almost in real time. In the end, Niagara works as both a peek into a different side of Monroe’s iconic screen persona and as a solid standalone thriller.

Niagara is presented in its original full screen aspect ratio of 1.33:1. The 1080p image is arrived at with an AVC MPEG-4 codec at an average of 33 mbps. Niagara may have been filmed in Technicolor, but it’s a film noir story all the way. Hathaway isn’t exactly subtle when it comes to his use of silhouettes and shadows. (Most notably in George and Rose’s cabin, as well as a gorgeous shot in the bell tower.) Fortunately, black levels are appropriately deep, which is especially impressive because most film noirs don’t have to wrestle with Technicolor to get their signature look across. The Technicolor image, meanwhile, is as bright and saturated as you’d expect. (Monroe’s red lipstick, in particular, appears sharp as a tack.) Panoramic shots of the falls look intermittently soft, but medium shots and close-ups are reliably clear and detailed. This is another winning effort from Fox.

The DTS-HD Master Audio 5.1 track is even more impressive than the visual presentation. The overwhelming majority of the film takes place either at the Falls (courtesy of the famous Maiden of the Mist boat ride) or in the Rainbow Cabin where the two couples are staying; and this incredibly dynamic track never lets you forget it. The rears are always working, even when it’s to subtle effect as the action shifts to the Rainbow Cabin (and the Falls are a ways off). On the other hand, all the speakers — including the subs — thunder to life the closer the characters get to the Falls. Dialogue is reasonably clear and well-balanced, particularly during a scene where one character is following another very close to the Falls and their words are believably hard to hear. The evocative, sometimes jazzy score from Sol Kaplan is definitely on the aggressive side, but this is an excellent track overall. You also have the option of listening to the mono DTS-HD Master Audio 1.0 track. (But why would you?)

Trailers: Includes the original theatrical trailer (3:03), as well as previews for other Marilyn Monroe titles: Bus Stop, Gentlemen Prefer Blondes, How to Marry a Millionaire, River of No Return, The Seven-Year Itch and Irving Berlin’s There’s No Business Like Show Business. Features a Play All option for the other Monroe movie trailers. Presented in standard definition.

The complete lack of special features is disappointing because Blu-ray releases of older movies are always an excellent chance to place the films in their proper historical perspective. (Especially when a fascinating figure like Marilyn Monroe is the star.)

That being said, this attractive high-definition presentation is absolutely worth a look, even if you already own the film on DVD. Niagara — celebrating its 60th anniversary this year — may not break too much new ground in the film noir genre, but it’s still worth a look in any format.

Detention of the Dead Femme Fatales: The Complete Second Season