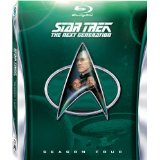 The fourth Season of Star Trek: The Next Generation erased any doubts that the show could stand on its own. The series had developed its own characters and situations that allowed the show to somewhat separate itself from the confines of the original series. The Best Of Both Worlds cliffhanger and fourth season resolution would become one of the top-ranked episode of all of Star Trek, and with a shot across the bow from the Borg, Star Trek: The Next Generation had truly arrived.

This would be a landmark season in many ways. Two of them were numerical. With the episode Legacy the series aired its 80th episode. Ordinarily, that might not be such a huge milestone, but it was for any series that was going to be called Star Trek. The original series had aired 79 episodes, and now that number was passed for the first time. Of course, all the succeeding shows would also surpass that mark. But it was Picard and his crew that first went boldly where no Star Trek series had ever gone before. The same season saw the 100th episode which is often considered an important milestone for future syndication deals. I don’t think Star Trek had to worry about that. The original show did just fine with only 79, and Next Generation was on its way to many more episodes…and years to come.

The fourth season certainly had a theme, and it was family. The characters had been developed enough that we were now able to get stories about their backgrounds and the people in their lives outside of their crewmates. It was a rather risky decision, but one that allowed the show to mature and placed it in a position to tell even more complex and character-driven stories in the future.

In Brothers. Data is compelled to take the ship to an unknown destination. There he meets his creator Dr. Noonian Soong and also encounters his “brother” Lore. Both were thought to have been dead and are all three are played here by Spiner. There are some great character moments here, but it’s also the genesis of the dreaded emotion chip which would become so annoying years later.

The family theme would continue in the episode called appropriately Family where we meet Picard’s brother and his family. After the Borg incident Picard needs some decompression time, and he decides to spend it at his boyhood home and family vineyard. His brother has always resented him for turning his back on the vineyard and going off into space. Picard gets the chance to reconnect and maybe get a little closure with his brother. This episode also introduces us to Worf’s adopted parents, and we meet Wesley’s father in a holographic message he made for his son’s 18th birthday.

In Legacy we meet a woman posing as Tasha Yar’s sister. We return to the hellish planet that Yar always talked about, and the crew allow their emotions to blind them to the fact that they are being used.

In Reunion Worf is once again reunited with his lover K’Ehleyr played by Suzie Plakson. it would be her final appearance in the role and she would leave a little “extra” family for Worf. This would be the introduction of his son Alexander.

In Data’s Day we get introduced to O’Brien’s wife Keiko and the episode surrounds the events leading up to their wedding. The couple would go on to be regulars when Deep Space Nine opened its doors for business a couple of years later.

Finally Wesley’s character leaves the show in Final Mission, where he goes on one last mission with Picard and ends up having to keep his captain alive in an isolated cave after their ship crashes on a desert world.

If family wasn’t enough of a theme for you, the fourth season would also be the year of returning characters. We already discussed the return of Lore and K’Ehleyr. In Galaxy’s Child LaForge comes face to face with engine designer Dr. Leah Brahms, only to find she doesn’t live up to the holodeck version that he fell in love with last season.

QPid sees both the return of Q, played by John DeLancie, but also Vash, the woman Picard shared a vacation adventure with the previous season. This is the worst of the Q episodes by far even if it does give Worf a couple of his most memotable lines like “I AM NOT a merry man”. The episode was clearly thrown together to capitalize on Costner’s popular Robin Hood feature film that was released at that time.

The season finale and new cliffhanger would combine both of these themes in Redemption. The episode would deal with the results of several previous episodes. Picard must finally place Gowron on the Klingon throne, and Worf finally deals with his discommendation. The most unexpected tie-in, however, would be the arrival of Tasha Yar’s Romulan daughter as the result of the episode Yesterday’s Enterprise. Denise Crosby would return to play her own daughter and receives some story credit for the idea. This episode would also introduce the infamous Duras sisters B’Tor and Lursa who would become recurring villains for the series and films.

Things would change behind the scenes with the addition of two new writers. Jerry Taylor would do for the Cardassians what Moore did for the Kingons. She would reveal this new race in the episode The Wounded, and they would go on to be the dominate bad guys for Deep Space Nine. The other new arrival would not be so good for Star Trek. Brannon Braga would soon become Rick Berman’s pet, and together they would conspire to wrest the franchise from Roddenberry’s dream after his death and reinvent it more to their own image. Fortunately, the franchise survived their vision, and neither one has anything to do with Star Trek today. Both Taylor and Braga entered knowing nothing about Star Trek. Both admit to not having seen an episode prior to getting hired, but they too opposite approaches. Taylor went on a month-long crash course, watching about 160 episodes of both shows. Braga decided to avoid watching any original Star Trek and still doesn’t understand why fans think he doesn’t get it. He almost takes pride in interviews with the moniker of the man who killed Star Trek. He wears it like a badge of honor, but fans know better.

Each episode is presented in its original full-frame aspect ratio. Yes, I would have liked to see widescreen here, but they do address that in the features. The 1080p image is arrived at with an AVC MPEG-4 codec at an average 25 mbps. After a drop-off in quality from season 2, this one is quite up to par. The model never had more detail in texture and lighting. Faces show distinctive features that didn’t exist in earlier versions. Data’s makeup flaws are actually clearly visible, particularly around the eyes. The image is sharper than it has ever looked for this series. Colors have a rich texture that I found quite impressive, particularly the deep red of the new uniforms.

You get all of the episodes on five discs. The following extras are also included:

Episode Promos for every episode

You also get all of the Mission Logs from the DVD set in standard definition.

In Conversation – The Star Trek Art Department: (1:07:29) The art department reunites in a very informal couch gathering. They share a lot of laughs and stories from their days working on the series. A lot of this is dedicated to Deep Space Nine, unfortunately; still there are wonderful stories to be heard here.

Relativity – The Family Saga Of Star Trek: The Next Generation: This two-part feature runs about an hour in total. The first part deals mostly from a writer’s point of view, while the second is mostly cast. It’s a nice retrospective on the season.

The fourth season of Star Trek: The Next Generation is about as good a season of television as any show has ever produced. The stage was set for the final three years to be able to go deeper into the rich texture of these characters and the adventures they share. Star Trek was always about character, and whenever that was lost the show struggled. The Next Generation folks got it the most. The show assured the already secure future of Roddenberry’s dream. “This is going to be with us a very long time.”

Gino Sassani is a member of the Southeastern Film Critic's Association (SEFCA). He is a film and television critic based in Tampa, Florida. He's also the Senior Editor here at Upcomingdiscs. Gino started reviewing films in the early 1990's as a segment of his local television show Focus. He's an award-winning recording artist for Omega Records. Gino is currently working on his 8th album Merchants & Mercenaries. Gino took over Upcomingdiscs Dec 1, 2008. He works out of a home theater he calls The Reel World. Favorite films: The Godfather, The Godfather Part II, The Body Snatcher (Val Lewton film with Karloff and Lugosi, not the pod people film), Unforgiven, Gladiator, The Lion King, Jaws, Son Of Frankenstein, The Good, The Bad And The Ugly, and Monsters, Inc.
Hands Of The Ripper (Blu-ray) Bus Stop (Blu-ray)