Posted in: Disc Reviews by Gino Sassani on August 14th, 2013 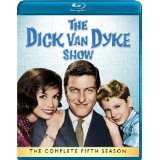 When the show ended in 1966 it was still one of the most popular shows on television. Both Dick Van Dyke and Mary Tyler Moore wanted to do something else. Both were made confident by the huge stardom the show provided them, but neither was ever able to reproduce the magic here. Of course, Mary Tyler Moore found great success with a different kind of show in The Mary Tyler Moore Show. That one would go on to become a classic in its own right. CBS didn’t want the show to end and continued to run the reruns for another four years before offering them to syndication where they continue to be a hit. Now that final season of classic episodes is available on high-definition Blu-ray for the very first time.

When one thinks of The Dick Van Dyke Show it’s hard not to think of its star Dick Van Dyke. After all, it’s his name on the opening credits, and he does play the lead character in this groundbreaking television comedy. There’s little question that the show became a wonderful vehicle for his many comedic talents. But the genius behind the show wasn’t really Dick Van Dyke at all. It was Carl Reiner (yes, Meathead’s father) who was the true brains behind the show.

Reiner was a popular comedy writer in the early days of television. He made his name with Sid Caesar, writing for the very popular Your Show Of Shows. During that time he had been inundated with ideas for his own show. He wasn’t happy with any of them and decided to write his own. The result was Head Of The Family. It starred Reiner as Rob Petrie, a television comedy writer living in the New York suburbs of New Rochelle. In a break from traditional sit-com style, he told his stories both at home and at the office. We got to see Rob with his fellow writers and with his wife and neighbors. If any of this sounds rather familiar…it should. It was a clever idea, but it stank up the ratings and was soon dropped.

It was Sheldon Leonard who approached Reiner with an interesting concept. He thought the show idea was wonderful; it just shouldn’t star Carl Reiner in the lead role. He thought that Reiner should write the show and recast it. Reiner resisted, often saying in interviews he wasn’t too keen on the idea of failing twice with the same material. Fortunately for television history he was persuaded to go along with the idea. The result was far from the ratings bomb of Head Of The Family. The result was one of the most popular television comedies in history. The result was The Dick Van Dyke Show.

The series starred Dick Van Dyke as Rob Petrie. He was the head writer of the fictional Alan Brady Show. Carl Reiner would take the part of the rarely-viewed Alan Brady. Rob’s fellow writers included Sally, played by Rose Marie. Sally was forever looking for a good man and had a rather cynical outlook on love and life. The third writer was Buddy, played by Morey Amsterdam. Buddy was stuck in the 40’s and 50’s, still wanting to tell the old vaudeville jokes. He liked to make fun of anyone and everything, but his favorite target for sarcasm was Mel, played by Richard Deacon. Mel was the balding producer of the show and Alan Brady’s brother-in-law. He took abuse from both sides and had the thankless job of acting as a liaison between Brady and the writing staff.

At home Rob had a wife named Laura, played by Mary Tyler Moore. Moore was an unknown actress at the time and got the job when Danny Thomas remembered her from an earlier audition. She once auditioned to play his daughter on his show but was turned down. The story goes that she didn’t have the nose for the job. He remembered her, however, and she became Laura. They had a son named Richie, played by Larry Mathews. The home life also included neighbors Millie (Guilbert) and Jerry Helper, played by Jerry Paris who also directed the majority of the episodes.

Stories could come from either the home or the office. The show was also known for telling many flashback episodes. These often involved Rob’s early Army life or his courtship of Laura. Any little thing could be a catalyst to a flashback story.

These little items would lead to Rob mentioning that there was a story behind the item and his friends insisting he tell it. The next thing you know we’re at a different place or time in the show’s mythology. One of those episodes was No Rice At My Wedding. Early in their relationship Laura was a raffle prize, and she ends up falling for the guy who won a date with her. Obviously, we already knew who she would pick but it was certainly an interesting addition to the back-story. Body And Sol recounts Rob’s days as an Army unit boxing champ. Remember The Alimony recalls the couple’s trip to Mexico where they almost end up getting a cheap quickie divorce, the papers becoming an interesting souvenir.

The show produced some of the most memorable episodes in television history. The most famous might be an episode that takes place in one of Rob’s nightmares. He believes aliens are using walnuts to take over the world. The episode starred show producer Danny Thomas but is, unfortunately, not part of this 4th season set. Fortunately, there are some classics to be found here.

The final season of The Dick Van Dyke Show included some classic moments. Uhny Uftz is another attempt at Twilight Zone-style humor. Rob’s working late when he hears a strange sound which matches the odd title. Then he sees a UFO. It all leads Rob and Buddy to the office of a mad scientist and his lab assistant who are trying to make a new top secret Christmas Toy. In Draw Me A Pear, Laura nags Rob into going to art classes with her, a decision she soon regrets. The attractive art teacher has taken a special interest in Rob that leads to “private” lessons. Odd But True was another classic that has since taken some notice in classic television lists. Ritchie discovers that you can connect the freckles on Rob’s back to make a Liberty Bell. Millie wants to enter it in the Odd But True column in the local paper. It all leads to a predictable but funny encounter in the waiting room of the Odd But True offices. Rob runs for Councilman in a two-part episode that is pretty much forgotten afterwards.

Now the classic show arrives on Blu-ray. You might not think the show can really add anything in high definition. You might not be totally wrong there, but it does look good. It’s also a chance to have the show in a more modern format. It’s more about status and a show deserving to be preserved in this way. I think you’ll find there aren’t many comedies in the history of television that deserves this honor. The Dick Van Dyke Show is one that does.

Each episode is presented in its original full frame format and in black & white. The 1080p image is arrived at with an VC-1 codec at an average 20 mbps. You’re not going to get show-off quality here, to be sure. Still, the black & white benefits from the sharper image and most particularly from the strong contrast. I’m not going to try to sell you that it looks like it was made today. It still looks like it was made in 1964. But that’s kind of a good thing here.

The DTS-HD Master Audio Mono is pretty much only there to serve the dialog, and that’s what it does.

Here there be the final episodes of The Dick Van Dyke Show. After 50 years, the show still manages to hold our attention. While the sets, hairstyles and trappings certainly date the show, there is something timeless about the stories that could just as easily be told today. Of course, there’d be cell phones and computers to complicate the lives of our characters, but the stories wouldn’t have had to change at all. The show comes full circle with Alan preparing to play Rob in a new show based on their lives, just as Carl Reiner did back when all of this got started. Could they have done it today? “If they did they’d get fantastic reception!”

Gino Sassani is a member of the Southeastern Film Critic's Association (SEFCA). He is a film and television critic based in Tampa, Florida. He's also the Senior Editor here at Upcomingdiscs. Gino started reviewing films in the early 1990's as a segment of his local television show Focus. He's an award-winning recording artist for Omega Records. Gino is currently working on his 8th album Merchants & Mercenaries. Gino took over Upcomingdiscs Dec 1, 2008. He works out of a home theater he calls The Reel World. Favorite films: The Godfather, The Godfather Part II, The Body Snatcher (Val Lewton film with Karloff and Lugosi, not the pod people film), Unforgiven, Gladiator, The Lion King, Jaws, Son Of Frankenstein, The Good, The Bad And The Ugly, and Monsters, Inc.
Duck Dynasty: Season 3 The Hot Flashes