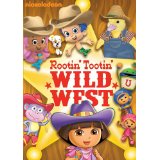 It is very common for Nickelodeon to release these sorts of compilation sets. Previously I had covered their themes of Learning the ABCs as well as their Christmas release (as found here: http://upcomingdiscs.com/?s=nickelodeon). This time we get 6 different Nick Jr. programs focusing on the “Wild West” (aka, country music, cowboys hats and horses).

Bubble Guppies: If I may start this review with a bit of rude frankness, I would sooner gargle thumb tacks than sit through a whole episode again.  The story lacked any real imagination. It’s the same worn out, condescending slow-talk that many children’s shows adopt. The main characters have fins…that’s seems the be the lone distinguishing factor. Other shows offer so much more than this one. Don’t waste your little one’s time with this.

Team Umizoomi: All of the shows are fanciful but this show utilizes more fantasy elements than the others. The animation is a clean CGI. Aside from the oddball characters, this show follows a very similar educational formula as many other kid’s shows. Can hold attention but not for very long.

Dora the Explorer: If you don’t know Dora by now, you’ve somehow avoided toddler marketing saturation all together. Dora follows a very strict formula and it does not change here. She still pauses to await answers from viewers, she still tries to ward off Swiper, and I still reach for the channel changer without haste.

Go, Diego Go: Do I need to describe this one too? It’s a male Dora the explorer…this time looking at kiddy cowboy stuff…nuff said.

The Fresh Beat Band: This is the lone live action show of this group (or of recent memory for Nickelodeon compilations). Four young adults pick the theme of a country song, and spend about half the episode staying true to this theme (the other half is dedicated to the pop music style that they are better known for). The hammy over-acting is pretty much par for the course for kids shows, and at least it suites choreographed tunes better than just unnaturally delivered dialogue alone.

Wonder Pets: If I somehow have regular readers, they’d know my disdain for this program (and most of the Nickelodeon programs apparently). We get two episodes of this show, both featuring a tangential connection to the overlapping Western theme. Said disdain continues and only gains strength with this release.

Fullscreen. The colours are insanely vibrant in each program, obviously the help maintain the visual attention of very young viewers. The transfer to DVD has not dampened anything. A nice picture quality in each program.

Dolby Digital Stereo which is a shame (subjective) that 5.1 isn’t utilized considering the introduction of fresh…. puts more emphasis on music, which could only be better appreciated in surround, The stereo offered still sounds very clear.

If you don’t know already, this is strictly to keep the kids occupied for a solid two hours around the holiday season. Need a break, place this in your DVD player…you’ve probably earned it. These sorts of DVD releases are short term babysitters, nothing more.