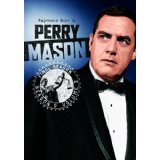 For nine seasons and several TV-movies afterwards, Raymond Burr was Los Angeles based defense attorney Perry Mason. This character’s verbal gymnastics, and uncanny hounding for evidence makes his famous winning streaks seem not just plausible but rather entertaining to behold. His adventures have been well-reviewed by myself and my reviewing compadre Gino on this very site (http://upcomingdiscs.com/?s=perry+mason).

The formula (for lack of a better term) of each episode maintains in this second half of the final season. The primary suspect is profiled, caught and examined in the first half of each story. When things do to trial, the true guilty party is found out, often on the witness stand, as Perry’s uncanny winning streak gets the best of those who try to hide the truth from him. Said winning streak might spoil one’s enjoyment of the show since the outcomes can be predicted during the opening titles screen, but the crimes (most often murders) are elaborate enough to maintain interest for the most part. At the same time, I feel it should be noted that the pacing of the show can often be slow. Think of it being a closer relation to Matlock than the sexier modern Legal dramas like The Practice. Not to say that it is better to have attorneys with chiseled jaws or short skirts versus methodical investigation and character development, but you had better prepare yourself for a lot of men in suits standing in one spot speaking their thoughts aloud.

The final episode did not have anymore melodrama or sentimentality than any other tale. Mason works the case, instigates a courtroom confession, and the very last moments are he and his team preparing for their next case. The last line from Mason (being the last line for the series) is “now it seems to me the place to start is at the beginning.” Indeed, the show’s ending felt the same as the show’s beginning, as it should. (Of course, the show did return for an extraordinary amount of made-for-TV movies after this season, but let’s pretend, for now, that this is the note it left on).

Fullscreen. A rather clean transfer for a footage that is nearly 50 years old. The dark tones have some haze and overall it could stand to be crisper. Not a bad presentation but the flaws are apparent when most of the scenes are black and white interiors containing dark suits that can occasionally look spotty, and straight lines of books and banisters that may look flawed.

The lone colour episode has a fair amount of blotches and scratches appearing on screen, but looks clear enough otherwise.

English Mono. This type of track is par for the course when it comes to transfers shows that are this old. Compared to previous CBS releases this is a touch muddier in quality but still acceptable.

Intro to “The Case of the Twice-Told Twist” with Barbara Hale: Hale, who played Mason’s legal secretary Della Street offers a juicy bit of TV trivia as she explains that this particular episode was shot in colour so that CBS executives could see what the program would look like if it were renewed for a tenth season. The Ninth season came at the cusp of CBS’ transition into full colour programming.

As Gino remarked in his previous reviews: “This is where the courtroom show started.” Indeed, Perry Mason was the launch point and remains worthy of return viewings to this day. The formula worked right through its final season, as demonstrated with this release. Oh, and I still get a rise from that killer theme song!