Posted in: Disc Reviews by Jeremy Butler on August 20th, 2013 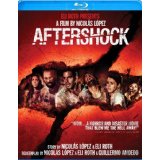 When you read that Eli Roth is part of the production team, the first thing you probably think about is the potential gore that will be associated with the project, and Aftershock is no exception, but there was also an interesting twist with this disaster flick: the involvement of a director who’s most known for his work in the romantic comedy genre, Nicolas Lopez, who’s most notable for his Que Pena Tu (translation: F*** my  (blank)) trilogy. He tries his hand at something new with this dark tale based in reality that highlights that the most frightening part of a natural disaster is not necessarily the disaster itself.

Two groups of travelers venture to Chile seeking a good time and get more than they could have ever expected. In the first group, Gringo (Eli Roth’s character, no real name given), an American, is led around the city by two natives: Ariel, who is recovering from a recent breakup, and spoiled rich kid Pollo. The two natives take it on themselves to show Gringo around and give him a trip that he will never forget.

While out one night at a club, the group encounters party girl Kylie, model Irina, and Kylie’s older stepsister and babysitter Monica (our second group). Pollo, who is determine to bed Kylie, convinces the girls (who were planning on leaving the next day) to spend the next day with them. After jam-packed day seeing all of what Chile has to offer, the group ends up back at another club party where things turn disastrous (cheesy choice of words, I know).  A massive earthquake erupts, killing and gravely injuring many. However amidst the chaos lies the true danger, as this group that was simply looking for a good time find themselves on the run from looters, escaped convicts, and the eventual and destructive aftershock.

This film caught me off guard at first; I wasn’t sure what to make of it. Given Roth’s involvement and the fact that he has never been one to shy away from reality-based brutality, I anticipated the gore, but what I didn’t anticipate was the comedy. Periodically during the first half of the film, there were a few instances of unexpected comedy which I suspect was the influence of director Nicolas Lopez. Another thing I didn’t expect was a cameo appearance Selena Gomez as one of the club’s patrons that Roth attempts to get to know better.

The film spent a little too much time setting the stage for the inevitable carnage; thirty minutes into the film, you’re still waiting for the action to start. That being said, when the action does get underway, it does it with a vengeance, as the cringe factor is extremely high. This film is not for the fainthearted or the weak-stomached. A nice addition was photos featured in credits of the characters out sightseeing. It almost looks like it could have been a nice vacation.

Aftershock is presented in an aspect ratio of 1.78:1. The 1080p image is arrived at with an AVC MPEG-4 codec at an average of 28 mbps. Filmed in Chile, the film is an excellent mixture real-life special effects and some CG work. Picture quality was very clear but not as crisp as I like except during close-up scenes where sheens of sweat, arm hair, and beards became the most detailed.

Dark levels for the film were very good, and the coloring and lightning of the partying scenes provide the immersive effect (made even more impressive by the reveal during the commentary track that no lighting equipment was used during these scenes). Special attention was spent on the gore for the film; that’s evident and appreciated, as it made everything feel more authentic.

The DTS-HD Master Audio 5.1 track works well with the film. Dialog is clear without having to be cranked. The film’s soundtrack is not memorable, but the destructive power of score certainly is. As expected, the most prominent scene to showcase the audio was the essential earthquake scene, and this where the audio performs; every scream, every glass break, and the crumbling of foundation provide the immersive feeling needed to sell the scene.

There is also a second audio track featuring an international commentary with Nicolas Lopez in Chile and Eli Roth in Los Angeles.

Shaking up the casting process: (02:11) This may well be the best special feature that I’ve seen in a while. It shows that just because you are making a movie doesn’t mean that you can’t have a little fun along the way. The brief featurette shows members of the production team during the casting process building a fake dressing room, and when the natives are changing, shaking the room to simulate an actual earthquake to gauge their reactions; definitely worth a watch.

Making of Aftershock: (09:28) This featurette features director Nicolas Lopez and producer/ lead actor Eli Roth speaking about what drew them to the project and it being loosely based on the earth that occurred in Chile in 2010. Intercut with scenes from the actual movie, Lopez takes the audience through how certain scenes were accomplished, and Roth talks about what makes a film scary. Also Ariel Levy (character name was also Ariel) speaks about how different Aftershock is from other films that he has done with Lopez.

Audio Commentary: First thing that grabs your attention is the legal disclaimer that pops up, absolving the Weinstein Company of any fault for anything said during the track, so that just lets you know there’s some juicy stuff contain within. The international track includes Nicolas Lopez in Chile and Eli Roth in Los Angeles; despite the distance of thousands of miles the two maintained an easy banter. They talk about filming at real parties with no lightning equipment, and the chance circumstances in which Lorenza Izzo (Kylie) joined the cast.

The movie pulls no punches whatsoever, highlighting every aspect of a real natural disaster, and in my opinion that’s what makes the film better and gives it an edge. During these types of films too much time is spent thinking about the big picture, and the human collateral is usually forgotten; it’s good to see a film focus on the other half.

Jeremy Butler is a film school graduate of the International Academy of Design and Technology. He is been writing for Upcomingdiscs since 2012; however, movies have played a big part of his life for much longer. Favorite genres include horror, science fiction/fantasy, and comedy. Favorite movies are V for Vendetta, Boondocks Saints, Kiss Kiss Bang Bang, and The Godfather.
Amazing World of Gumball 3: The Party Whelmed… But Not Overly