Posted in: Disc Reviews by Gino Sassani on September 4th, 2013 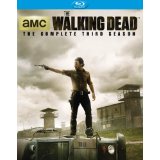 “When the world goes to Hell How will you survive?”

The first thing you should know about The Walking Dead is that it’s unlike any television series you have ever seen before. The images here are intense, and the crew has been given a blank check to create this vision without the burden of censors looking over their shoulders. There are plenty of blood-and-gore effects that rival any of the Hollywood zombie films you’ve seen in the last few years. The makeup effects are handled by the very capable hands of KNB and supervised personally by Greg Nicotero (the N from KNB). KNB isn’t treating this like a television production, and while I personally get tired of the cliché about making a movie each week, this one lives up to the hype. They aren’t doing anything different here than they would do for a big-budget film. The zombies look incredible, and the effects are completely first-rate.

If you need to know more before considering the third season, you need to go back to the beginning. It will be well worth the time and money to do so. You can check out our reviews of the previous seasons by banging it here: Walking Dead Reviews. These will quickly get you hungry for the first two seasons and get you caught up with the rest of us and into the breach with season 3.

Season 3 finds the survivors leaving the farm that has been their home and the focus of the second season. Some of their number are already gone, and Hershel (Wilson) is now along with his two daughters. As luck would have it they did not have to wander far before coming on to a state prison. After clearing out the walkers on the grounds they set up camp in one of the cell blocks. There are a few surviving inmates to contend with who don’t even know what’s going on in the outside world. Some of these guys are good. Some of them are very bad.

Fans will be delighted to find that we catch up on some old friends as well. Merle (Rooker) has found a home in a small city called Woodbury. The residents have managed to build a wall, and life there is remarkably normal. There’s power and plenty of food and water. People stroll the streets, and there are fairs and parties. The city is run by a bit of a dictator who calls himself The Governor (Morrissey). There are bread and circus events that pit fighters against walkers in a rink for the entertainment of the town. Life may seem normal on the outside and even to many of the naive that live there, but Woodbury holds a lot of dangerous secrets, to be sure. The city also ends up attracting Andrea (Holden) who has been wondering with Michonne (Gurira) with a couple of pet walkers on chains to help them move about the walkers.

As you might expect, things are not going to be peaceful between these two camps and the series ends with an all-out assault on the prison from Woodbury. It reminds me of the mutants attacking Ape City in The Battle For The Planet Of The Apes.

Another of the things that sets this show apart from almost all others is that none of the cast is safe. Each season we see front-credit characters get killed. Each time it comes as a surprise, because you are led to consider them as vital members of the group and more important, crucial parts of the ongoing story. I love the fact that anyone can go, and in season three you won’t expect who is leaving the show. Of course, if you’ve already watched the broadcasts or read much of the news coming from the show, you already have those answers. I’m not going to spoil your fun by providing the specifics here. I will only say that  more than one top-billing characters won’t be returning for season 4. I strongly suggest that you do.

The sets this season are the most impressive yet. They built the entire prison grounds on a back lot. Usually these kinds of shoots use a real prison as they did in Prison Break. These guys built it from scratch, and it looks remarkable. I love the idea of a group breaking into a prison in order to be safe. It was a huge part of the comic run, and when you think about it, what better place to hole up against zombies?

The characters also continue to grow. You can not have people face this kind of life and not be horribly changed by it. Characters become sacred things to their fans, and I know the temptation to avoid any real change to who they are. In this show that would be a mistake. The change is played out particularly well with young Carl (Riggs). He’s had to grow up quickly and do things that no 11-year-old boy should have to do. If he continues on his way he will not be a very good person, and it would be both brave and compelling to let him become the evil man he’s already beginning to develop into. In many ways season 3 is beginning to look to be less a story about the zombie infestation and more of an elaborate origin story for whoever Carl eventually becomes. It’s actually quite chilling.

The f/x continue to be cutting-edge thanks to the talents of Greg Nicotero. It’s quite amazing to see how much detail and gore he can provide on a television budget. It doesn’t hurt that he obviously loves what he’s doing, and his passion is absolutely infectious to his fellow crew and castmates and eventually to us. This was groundbreaking television when it began. I’m happy to report it has only gotten better.

Each episode is presented in its original aspect ratio of 1.78:1. The 1080p image is arrived at with an AVC MPEG-4 codec at an average 25-30 mbps. The high-definition image presentation gives you the best possible view of the amazing production standards on this series. There is sharpness and detail enough to suck you right into this world. Sure, there are some CG elements that don’t quite look real, but these guys have kept the computer work to a minimum. Most of this is practical, so there is a texture and detail here that can’t fail to impress. Black levels are fair, but this show doesn’t hide in the dark very often. Most of what you see here happens in the cold light of day. It’s a brave choice, one that’s rewarded with this transfer. There is a fair amount of grain, but it only makes the image that much more alive.

The Dolby Digital TrueHD 5.1 is just as impressive here. Again, this just doesn’t sound like a television show. It sounds like a feature film with a lot of money to spend on sound design. There’s far more sub activity than I was expecting. The film also does a great job with silence. There are effective uses of silence throughout. If ever a sound were visceral, this is it. You can hear the bone-crunching and squishing sounds of body parts being munched on. Dialog still punches through perfectly.

There are commentary tracks and deleted scenes for select episodes.

Rising Son: (6:47) The piece focus on the Carl character and some of the evolution I mentioned in the review.

Gone But Not Forgotten: (8:14) Tribute to the big fallen character.

Heart Of A Warrior: (8:25) Michonne gets the spotlight here with an accent on the action stunts.

Michonne vs. The Governor: (5:13) The two provide one of the extensive fight scenes this season.

Safety Behind Bars: (9:44) Take a look at the prison sets and watch how they were constructed.

Guts And Glory: (7:42) Little eulogies and tributes to the fallen characters from the season.

Zombies are cool, and they have been even before Romero set them loose in a Pittsburg cemetery. I’ve been to the cemetery, by the way. It’s quite creepy. This show will always please with the zombies’ blood and guts. But that’s not what makes it quality television. That’s not what keeps it on the air. Honestly, folks like me get pretty desensitized to all of the blood and guts. It’s compelling characters and stories that keep me coming back for more. These guys haven’t yet forgotten that part. If/when they do, well then…”It really is all over”.

Gino Sassani is a member of the Southeastern Film Critic's Association (SEFCA). He is a film and television critic based in Tampa, Florida. He's also the Senior Editor here at Upcomingdiscs. Gino started reviewing films in the early 1990's as a segment of his local television show Focus. He's an award-winning recording artist for Omega Records. Gino is currently working on his 8th album Merchants & Mercenaries. Gino took over Upcomingdiscs Dec 1, 2008. He works out of a home theater he calls The Reel World. Favorite films: The Godfather, The Godfather Part II, The Body Snatcher (Val Lewton film with Karloff and Lugosi, not the pod people film), Unforgiven, Gladiator, The Lion King, Jaws, Son Of Frankenstein, The Good, The Bad And The Ugly, and Monsters, Inc.
Women Who Kill Sons of Anarchy: Season Five (Blu-ray)