Beauty & the Beast – The First Season

Posted in: Disc Reviews by William O'Donnell on October 12th, 2013 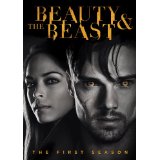 A New York city homicide detective is haunted by the night where her mother was murdered by two gunmen, who themselves were killed by a mysterious being. A decade after that night she finds out that the mysterious being is still around. As this “Beauty” and her “Beast” finally meet, they start investigating the truth behind their secret ties to each other.

The similarities between this adaptation of Beauty and the Beast and any others begins and ends at the title. Originally slated as a reboot of the 1987 series that starred Ron Perlman and Linda Hamilton, this series trades the romance and battle of misfits for crime investigations and military conspiracies.

The “Beast” of this series is one of the most troubling elements. Instead of a monster (or anything remotely beastly) we have a man who was transformed by a super soldier serum that makes him have super strength and super senses when made mad. As you can already tell, this show is really trying to be a combination of Captain America and The Incredible Hulk. When the Beast goes into mad mode, the only physical change is he gets just slightly uglier…just…slightly. For anyone who recalls the vampire transformations in the Buffy and Angel series….it’s less than that.

Kristin Kreuk makes for a good lead and performs her role well. The rest of the cast leave plenty to be desired, and the storytelling does not help. There is a war between solving each episodes case and the overlapping mystery of the Beast that makes the show seem rather unfocused at times. This lack of consistency makes it difficult to maintain interest.

If I may be so bold, I take issue with something in this show (and others, but this show makes for a good example) frighteningly skinny characters, particularly detectives. Both Kreuk is certainly petite but even more concerning is her character’s cohort, who is played by Nina Lisandrello. This person is skinny to a degree that I simply cannot believe her as detectives. It’s that Hollywood level of skinny that borders on malnourished, which I find distracting. I had the same issue with Jennifer Carpenter on Dexter. I’m not trying to make an anti-feminist rant about female detectives, and maybe I shouldn’t be speaking about such matters when trying to evaluate a television program, but I find it difficult to see these people as action-ready cops when they seem to have neither fat nor muscle on their bones. I know that this is not a new issue (don’t get me started about the unrealistic ideals it creates for young viewers) and many will wonder why this is the show I decide to attack, but it is something that both takes me out of the program and places me in a position where I’m more concerned about the well being of the actor than the character. To me, that’s a failure for both the performer and show.

Widescreen 1.78:1. This show’s picture quality seems covered in this unusual haze that I, until now, had only ever seen on UK programs transferred to a North American DVD. I don’t know what the technical term so I’m going to name it “yUK”. I know this has something to do with how tapes get transferred…but I like my single syllable term better. This is not terribly prevalent anyways as it is actually a decent video presentation. Not great by any stretch but acceptable.

Dolby Digital 5.1 and English Stereo are the options. The score gets spread nicely to the Surrounding speakers. There is plenty of bass on the bigger sound effects and musical strikes. Said bass does not drown out the dialogue when things are chaotically mixing together in certain action scenes.

Deleted Scenes (Located on all discs with their respective episodes): Many of these “deleted” scenes seem to be more of the “extended” cut variety. Many of which I couldn’t really notice the difference between them and what was left in the actual episode, if I may be honest.

Disc One Exclusive:
Commentary on Pilot by Sherri Cooper and Jennifer Levin: An affable bundle of positive reflections and compliments made by these commentators.

Disc Four Features:
Creating the Beast: The idea of the Beast on this show seems like a joke to me, but there still is a makeup process that goes into creating their version of a leading man/monster in various battle forms.

Season in Review: The Beginning: There is always a redundant feature on sets like these and here it is. A light examination of the season you just watched. Perhaps I’m being too harsh but really, it isn’t super insightful.

Gag Reel: Lengthier than most. Loaded mostly with laughs that spoil lines.

Dressing the Beauty: Sounds like it’d be a lot fancier than it is. But this is still a nice look at the costumer designers at work.

I rolled my eyes at the announcement of another adaptation of this fairy tale with sexy actors (Beastly being the most recent other culprit). Now I’m wondering how much longer until the novelty wears off and this show disappears and we can all await the next version in…oh, about 6 months after that.