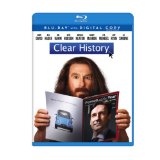 “You think you had a bad day? This guy lost a billion dollars.”

Clear History is ostensibly about hot-shot marketing exec Nathan Flomm, who misses out on a billion-dollar payday after a petty disagreement. But really, this HBO Films original comedy is basically a 100-minute, all-star episode of Curb Your Enthusiasm with prettier scenery. As such, it’s another opportunity for writer/star Larry David to profanely and incredulously sound off on a fresh set of social landmines, including insincere apologies and birthday e-card etiquette.

David stars as Nathan, who parts ways with Electron Motors head Will Haney (Jon Hamm) after strongly disagreeing with the name of the company’s new electric car: the Howard. (I’m actually with Nathan on this one.) Of course, it doesn’t matter what Nathan or I think because the Howard becomes the next great technological invention. Unfortunately, Nathan had foolishly relinquished his share of the company, so he loses his wife (Amy Landecker), his house, and even his hair. (During these early scenes, David wears a wig with ridiculously long, brown hair.)

Fast forward 10 years to the present day. Nathan has moved to Martha’s Vineyard and reinvented himself as Rolly DaVore. He’s chummy with the locals, like poker buddy Frank (Danny McBride), and he’s even on good-ish terms with ex-girlfriend Wendy (Amy Ryan). Rolly’s world is turned upside down when he finds out the garish new mansion being built on the island belongs to his former business partner, who also has a shiny new wife named Rhonda (Kate Hudson). Rolly doesn’t want to leave his new life behind, but he also doesn’t want his humiliating secret to get out. So he enlists a pair of unhinged locals (Michael Keaton and Bill Hader) to help him blow up Will’s new mansion.

As you can see, director Greg Mottola (Superbad) has enlisted a star-studded cast for his funny farce. The supporting players also include Eva Mendes and an uncredited Liev Schreiber, who steals every one of his scenes with his menacing brand of humor as Chechen tough guy Tibor. (Here’s hoping Schreiber — who is uncredited in this HBO movie because he stars in Showtime’s Ray Donovan — finds time to do more comedy in the future.) Although it probably didn’t take much to convince these actors to hang out in some of the more picturesque parts of New England so they could goof off, I imagine the real attraction was working with David.

The professional curmudgeon — and, famously, real-life George Costanza — is one of four credited “writers” for this movie along with Seinfeld scribes Alec Berg, David Mandel and Jeff Schaffer. I only put “writers” in quotation marks because Clear History follows the Curb model of having the actors improvise almost all of their dialogue. That’s why I was especially delighted to see Curb fan favorite J.B. Smoove pop up in Clear History to argue with Larry Rolly about dwarf racism; if only there’d been a way to have Susie Essman stop in to yell at him too.

The rest of the cast came to play too. Hamm could play a charming jerk in his sleep, but he gives Will some depth. (Plus, the Mad Men star continues to prove he’s equally adept at comedy.) Ryan doesn’t have much to do — besides serve as the subject of a recurring gag involving a sexual encounter between her character and the band Chicago, who appear as themselves — but Hudson gets to draw on her rom-com bona fides when Rhonda and Rolly strike up a flirtation. McBride, not surprisingly, proves to be a strong, natural scene partner for David, while Keaton gets to resurrect his gruff Beetlejuice voice for his disgruntled character.

Mottola keeps things moving well enough, though some of the comedic bits — including Rolly’s feud with a waitress who places his silverware directly on the table (with no napkin buffer), as well as his belief that wall outlets should be at eye level — inevitably drag a little and feel overly telegraphed. Rolly is more outwardly likable than David’s eponymous television character. More importantly, David still looks like he’s having a lot of fun. Hopefully, David had such a blast making Clear History that he’ll be inspired to step back onto Curb sooner rather than never.

Clear History is presented in its original aspect ratio of 1.78:1. The 1080p image is arrived at with an AVC MPEG-4 codec at an average of 24 mbps. There’s no virtually no filmic grain because, as we previously covered, Clear History closely resembles a certain TV show. Color and skin tones are warm overall, and there’s not a ton of fine detail on display. The outdoor scenes — which come quite frequently — fare the best in terms of sharpness and clarity. The Blu-ray gives us a clean, unambitious HD presentation that gets a slight boost from its photogenic New England setting.

The DTS-HD Master Audio 5.1 track is, not surprisingly, mostly here to serve the comedic dialogue. As such, the track is balanced extremely well and lets you hear every muttered riff or insult without too much effort, even when the dialogue overlaps. There’s not much in the way of immersion — even with all the outdoor scenes — but the entire sound field comes to life whenever the movie cranks out a Chicago tune. (“Saturday in the Park” or “If You Leave Me Now.”) The rest of the jaunty score is reminiscent of Curb‘s ironically cheery theme. Meanwhile, the subs only really come into play during a crucial explosion.

There are no special features on this set and, more importantly, there’s no word yet on whether David will make a ninth season of Curb Your Enthusiasm. (It’s especially disappointing because season 8 was, against long odds, one of the show’s strongest.)

While we wait for David’s decision, Clear History is a fine appetizer for fans of his TV show. The only problem is this movie will just as likely make those same fans even hungrier for Curb.