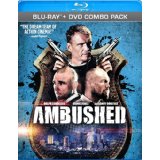 The most surprising thing about Ambushed is that it’s not quite as generic as its completely uninspired title might suggest. (Off the top of my head, I can think of at least 15 movies that could credibly be re-titled Ambushed; I’m sure you can too.) This particular straight-to-DVD action thriller is being sold as The Expendables-lite, with tough guy supporting players (and Ambushed producers) Dolph Lundgren and Randy Couture — along with Vinnie Jones, who really should’ve been in an Expendables movie by now — glowering from the Blu-ray cover. But this stylish L.A. drama — which liberally borrows from superior crime flicks — has a few tricks of its own.

Despite the presence of Lundgren, Couture and Jones, Ambushed is technically the story of Frank (Daniel Bonjour), who narrates the film. Frank is a strip club owner in downtown Los Angeles who is also involved in the cocaine business along with best friend/brash Scotsman Eddie (Gianni Capaldi). Frank also has a sweet, staggeringly gullible girlfriend named Ashley (Cinthya Bornacelli), who is the only pure thing in his life. Since Frank eventually wants to leave the drug business and make a life with Ashley, he makes a bold, violent play to move up the cocaine food chain.

I realize this might be a personal hangup, but it’s almost impossible for me to hear cynical voiceover narration about the ups and downs of a life of crime without immediately thinking of Ray Liotta’s Henry Hill in Goodfellas. The good news is that, instead of getting defensive at the suggestion that he’s ripping off a classic mob drama, I suspect director Giorgio Serafini would take this as a compliment. The director, working from a hodgepodge script by Agustin, has openly made Ambushed in the spirit of ’80s/’90s thrillers like Scarface or Carlito’s Way. There’s also a heavy dose of Guy Ritchie’s pre-Sherlock Holmes filmography, and even a hint of Boogie Nights in there, with everything going great for our driven, dopey main characters…until things stop going great.

Frank, unfortunately, is the most problematic character in the movie. I really liked the idea that smooth, calculated Frank was the one who acted harshly in an effort to move up in the criminal underworld. (It’s almost always the hot-head — in this case, it would’ve been Eddie — who tries something that stupid.) Unfortunately, Frank turns out to simply be an inconsistent character who revels in his criminal activity one moment, but pines for good girl Ashley a few moments later. I understand the filmmakers wanted to tether Frank (our protagonist) to something pure, but it easily winds up being the weakest part of the film. That time might’ve been better spent showing us how and why Frank and Eddie became friends in the first place, since Capaldi does nice, nervy work as Eddie.

Thankfully, the marketing team didn’t pull a complete rope-a-dope by putting Lundgren, Couture and Jones on the cover; although Frank and Eddie drive the story, the three better-known performers have plenty to do. It’s always refreshing to see Lundgren’s imposing presence and low-key charm used for a good guy role rather than his umpteenth villain. Out of that main trio, Jones is the one who really isn’t in the movie enough — not a surprise given that his IMDb page says he has more than 10 movies either completed or in post-production this year and next — but the busy actor makes a strong impression. (Vincent dispatches one unfortunate henchman by forcing him to take part in a knife fight.) The real surprise, however, is Couture. Up until now, I haven’t cared for the UFC legend’s “acting”, but he really throws himself into playing a scumbag and even displays a scuzzy charisma I didn’t know he possessed. Fans who like to see action titans clash with each other will also be delighted by the gratuitously rain-soaked fight between Lundgren and Couture toward the end of the movie.

Carly Pope also does solid work as the newest girl in Frank and Eddie’s inner circle. The movie — which has a bloody, admirably downbeat final act — clumsily makes a case for the illegal drug trade and tries to argue the futility of the war on drugs, but doesn’t bother following through on either point. That’s fine because Ambushed is actually at its best when it’s parroting first-rate crime flicks with a slick verve of its own.

Ambushed is presented in an aspect ratio of 2.35:1. The 1080p image is arrived at with an AVC MPEG-4 codec at an average of 23 mbps. Director Giorgio Serafini employs a lot of visual tricks — split screens; different filters; high-contrast shots in the L.A. sun — to liven up his familiar crime story. Fortunately, this Anchor Bay Blu-ray does an exceptional job of presenting them clearly and faithfully. A good portion of the action takes place either at night or in Frank’s darkened night club, and the black levels are appropriately deep and feature solid separation. Close-ups also reveal an impressive amount of detail on the actor’s clothes and faces (particularly Lundgren and Couture’s weathered mugs). Some of the establishing shots, however, look noticeably worse than the rest of the film, possibly due to aliasing. That’s the only big hiccup in what is a strong HD presentation of a low-budget action flick that has a lot going on from a visual standpoint.

The Dolby TrueHD 5.1 track is generally as aggressive as you’d expect from a low-budget action flick starring a couple of Expendables. The hip hop-flavored songs are particularly (and overly) strong when used for scene transitions, but at least they give your subs a good workout. In contrast, the track has a subtle sense of immersion, at least when the action moves outside to the streets of downtown L.A. Not surprisingly, the entire sound field explodes to life whenever there’s gun fire (with sound traveling well from one speaker to another), and the track does a solid job with the dialogue, which is trickier than it sounds thanks to the variety of accents on display.

Behind the Scenes — Ambushed: (15:02) The director and his cast discuss the project, and we get a peek at on-the-set footage. Lundgren talks about liking the idea of going head-to-head with Couture on film, while a producer curiously refers to Frank and Eddie as “supporting characters.” (I guess they have to keep pushing the agenda that this movie is about Lundgren, Couture and Jones’ characters.) Anyway, the director also pops in to reiterate the idea of downtown Los Angeles as a character and confirm his love of ’80s action movies.

Ambushed is also known as Hard Rush, which is somehow an even more awful and generic title.

Whatever you want to call the movie, it’s worth a look if have 97 minutes to kill and you want to watch a violent, entertaining crime drama that reminds you of the great crime dramas you already love. Just don’t pick this one up expecting Lundgren, Couture or Jones to be the stars of the show.