Posted in: Disc Reviews by William O'Donnell on November 21st, 2013 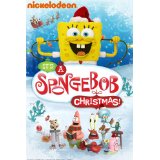 It was inevitable. Spongebob Squarepants gets its own Christmas Special. Usually television shows take the lazy route and inject their own characters into a familiar Christmas story and make a parody or adaptation (how many times have we seen Charles Dickens A Christmas Carol redone?). Thankfully this special offers a unique tale of the malevolent Plankton creating a special fruitcake that turns any eater into a totally jerk. Will Spongebob’s demeanour make him immune? Of course…but what of the rest of Bikini Bottom?

This episode/special takes up a full half hour time slot, which separates it from many of the other Spongebob stories that range closer to 10 or 15 minutes in length. That is not its most notable characteristic though. This episode adopts the Rankin/Bass style stop-motion of animation that has become synonymous with Christmas specials. Though the movements are far smoother and more frantic than the classics it is honouring, the animation is well coordinated and looks very nice.

Like many a holiday special before it, there are festive tunes anchoring it. Santa’s Eyes is a joyful romp that splices in a couple segments of reworded yuletide classics, but the true highlight is “Don’t be a Jerk (It’s Christmas)” which was written by voice actor Tom Kenny (better known as the voice of Spongebob). Both tunes blend into the Spongebob style of humour and suite the joyful spririt of this episode.

This tv special is worthy of ranking amongst the better of the more recent tv offerings such as Community‘s stop-motion romp or Clone High‘s “Snowflake Day.”

Widescreen 1.78:1. The animator may have been tempted to take advantage of our nostalgia and age or downgrade the footage to give it a more vintage appearane. Instead they opted to maintain the high standard of picture clarity that Nickelodoen has kept on all Spongebob DVD releases.

Dolby Digital 5.1 audio. The sound isn’t terribly forceful in the surrounding speakers but the songs get nice coverage and the rest of the audio is very clear.

Behind-the-scenes: A fun look at the creation and use of the puppets tht should be enjoyable informative for young viewers.

Animatic: A side-by-side option for seeing the original animatic next to the actual special for its entire length. You don’t often see this option offered for the entire length of a show, usually it is just a scene or two to get the point across. It is interested to see the changes that get made in the assumed stages between animatic and the final animation.

Yule Log: A parody of the ever burning logs that some TV stations air around the holidays. It runs on an endless 30-second loop of music until you turn it off. This is an inspired feature that I have not seen done by other Christmsa releases.

MP-3 songs: If ypu place the disc into your home computer it offers you the chance to receive two free MP-3 versions of two songs featured in this special.

This particular release also comes with a colouring book, crayons, stickers and a poster.

Though only getting one episode on the disc may seem too light to bother with, bonus that come with the packaging and the many bonuses features make this a very worthwhile present for the Spongebob fan in the family.