Posted in: Disc Reviews by Archive Authors on November 25th, 2013 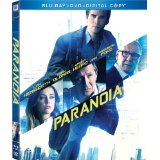 It’s nice to see two Spielberg veterans in the same movie. It’s been a long time since American Graffiti when Harrison Ford and Richard Dreyfuss last appeared together. It’s been a long time since Hooper in Jaws and Roy Neary in Close Encounters of the Third Kind, but Dreyfuss and Ford don’t appear together in this movie either. It’s like they are in two different movies. Paranoia is a corporate espionage thriller with two CEO’s played by Harrison Ford and Gary Oldman, who have strong ties and stronger hates. There is lots to like about the movie, but many, many missed opportunities too.

The story is fairly tangled and revolves around a young genius (Liam Hemsworth, the brother of Chris who plays Thor in some other movies) who suffers from immaturity and bad judgment. Richard Dreyfuss is his lovable loser of a father who needs his medical insurance. But he loses his medical insurance because he’s not important enough to his big boss Oldman, who fires him. It turns out that was a bit of a ruse. It’s actually much more convoluted and confusing than that, but that’s the essence of it. Oldman’s rivalry with his former mentor and now fierce competitor played by Ford is all-consuming, so much logic is lost in his zeal. Oldman uses threat of death and promises of riches to entice Hemsworth to infiltrate Ford’s inner circle.

One of the biggest problems with this kind of movie is believability and credibility. It traffics in the stratospheres of advanced technologies and corporate hierarchies which few of us are privileged to. Still, I assume that people of great technical intelligence do not sacrifice every bit of their moral intelligence to greed and petty revenge. The twists and turns are many, and although they may be somewhat predictable, I won’t spoil anything beyond this point.

To me the real pleasure is seeing Ford go way out on a limb with this role. He’s never been the best of actors, but what he does well, he does very, very well. He always brings a mean under current to even the nicest of his characters. Then sometimes his meanest characters have a very soft underbelly. Ford makes the best of the part and is the best thing in the movie. Oldman doesn’t quite match up to a very Machiavellian turn by Ford. Oldman is too clearly caught up in obsession. Hemsworth is one of a new crop of actors being given a shot at stardom, but he is tall and generally listless.  There is nothing wrong with being tall and hunky, but just don’t stand around like a hunk of wood all the time. He has a romantic interlude with Amber Heard that generates no heat. The film is supposed to revolve around the young stars, but when they are on the screen we are bored until one of the old pros shows up.

Paranoia is presented in its original aspect ratio of 2.40:1. The 1080p image is arrived at with an AVC MPEG-4 codec at an average 30-35 mbps. The film looks rather sterile in its high-definition image presentation. It’s almost too sharp and shiny. Colors are completely natural and flesh tones are spot-on. The image is its expected crystal clear quality. Black levels are excellent. While there may not be anything eye-popping going on here, it holds up as detailed and sharp as it gets.

The DTS-HD Master Audio 5.1 is mostly there to service the dialog. This is a very dialog-driven film. There’s no real reason for subs to come alive, and so they don’t. Music is rather subdued and surrounds are pretty dull.

Deleted Scenes: (4:48) There are four with a play all option. Mostly this is extended stuff and adds little to the film or story.

Privacy Is Dead: (6:00) Cast and crew talk about the lack of privacy in today’s society. They point out how often cameras are watching you in a typical day. There’s some touch on the recent NSA monitoring scandal.

The Paranoia Begins: (5:50) This one goes back to the book, and there’s a discussion on the events and situations that inspired the material.

That is why I think the movie would have been so much better if the elders on the screen had not left the young kids alone. But they do way too much and for way too long. It’s so bad that when Dreyfuss shows up again late in the movie he tears up the scenery with pathos and comedy. It’s not great, but it props up a film that is flagging considerably. The plot has gotten lost, and the little vitality that Dreyfuss provides brings the film home.

As I said, there is a lot to like, but the pleasures of the film keep getting away from us, because the film really should have been about Ford, Oldman and Dreyfuss in the forefront and Hemsworth in the background. Unfortunately, they got it backwards.

Some of this material was written by Gino Sassani

The Hunger Games: Catching Fire All the Presidents Men (Blu-ray)