All the Presidents Men (Blu-ray)

Posted in: Disc Reviews by William O'Donnell on November 25th, 2013 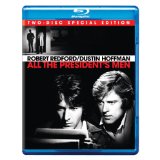 This is a film that has become a significant contribution to the very the timeline it depicts, which is that of US President Nixon being forced into resignation after the Watergate scandal. This film is an engrossing depiction of the actual reporters who used anonymous tips to help uncover a scandal so big that it rocked the entire US nation. This film was released only four years after the infamous attempt to bug the Democratic offices in Watergate, which spurred the entire course of events in this film. This was a bit of a passion piece for Robert Redford, as he began production while its main characters Bob Woodward and Carl Bernstein (who would be played by Robert Redford and Dustin Hoffman, respectively) were still reporting on related elements. Redford spent tireless hours, acting officially as the producer and star, researching the stories and the characters in order to deliver a compelling but painfully accurate adaptation.

By making these two reporters the main characters, the film became more of a detective story instead of merely a dramatization for what could easily have been a documentary. By seeing the actual methods these two men apply to uncover the details of Watergate, and “follow the money,” makes the audience all the more engaged in their findings. This, despite the fact that most everyone knows exactly how the film ends well before it begins.

The script by William Goldwin is top-notch. It does not hurt that he had a very talented cast to deliver it, but he certainly does capture more than just the facts from the original stories/books he is adapting. As well, Goldwin had the benefit of strong direction by Alan Pakula. In particular I thought he made outstanding use of deep focus shots that depict Woodward typing away in the background, while actual news footage of Nixon plays in the foreground. They made for beautifully orchestrated reminders of how real these incidents, along reporters’ magnificent efforts, were.

All The President’s Men is presented in its original aspect ratio of 1.85:1. The 1080p image is arrived at with an AVC MPEG-4 codec at an average 25 mbps. This is the same exact transfer from the earlier Blu-ray release. While the film certainly shows its age, the print is actually quite clean of artifacts or debris. There’s just the right amount of grain to remain authentic to the period’s film stock. The film is almost always quite dark, playing with shadows that are pretty well defined here. In contrast, the lights of the newsroom are a bright, sterile light that sets it apart from the world outside in both tone and atmosphere.

DTS-HD Master Audio 2.0 in English. I’d say that very little has been boosted to make the film seem grander, but there is just so little to boost. The chattering of typewriter keys and anxious tones of voices are about as boisterous as it gets. This film does not require much by the way of a major sound, but certainly some more effort could have been made into immersing us into a newsroom atmosphere, sonically. Mind you, they did not fail, just fell a bit short from their potential.

The first disc is identical to the earlier release with these extra features.

Telling the Truth About Lies: The Making of All the President’s Men: (28:22) Compilation of interviews with the stars, producers, reporters, as well as Woodward and Bernstein themselves. A few of the interviewees imply that this sort of story could not be created today, in the way it was back in the 70s. Indeed, this is a rare case that could only exist because of the time it happened.

Out of the Shadows: The Man Who Was Deep Throat: (16:21) Perhaps the most iconic character from the film, famous for being illuminated only by his cigarette ember as he feeds hints to Woodward inside an empty parking garage.

Now that Deep Throat has been revealed as former FBI Associate Director Mark Felt, we get to see a miniature biography on the man instead of some nearly cryptozoological account of a mysterious persona. Trained directly under J. Edgar Hoover, some suspect that his motivations for revealing these clues came as a combination of patriotism and revenge for not being selected to replace Hoover when the opportunity arose. A nice profile of a terribly interesting person/situation.

Pressure and the Press: The Making of All the President’s Men: (10:05) Similar to what is documented in the previous trio, only this was made very close to the actual premiere of the film, which makes its tone interesting in contrast. The events are still very fresh and the mysteries (including Deep Throat) remained up in the air. An interesting piece that helps add some extra context to how people might have reacted closer to the time of the events and film’s debut.

5/27/1976 Dinah! With Jason Robards: (7:10) A strange-looking talk show where Dinah and Robards discuss the film. A nice enough interview that, like the previously mentioned featurette, helps add some emotional context to people’s first reactions to the film.

All The President’s Men Revisited: (1:27:46) The feature-length extra includes a reunion between Redford and Hoffman as well as another between Redford, Bernstein, Woodward and Bradley. For the rest of the feature the Watergate scandal and the film are discussed by various actors, crew or political pundits. We get a lot of examination of the impact of both the scandal and the film. A couple of the participants use the event to score political jabs at conservatives in general. It would have been so much better a piece without the political agenda.

The story is undeniably interesting and important, with or without the film, but the fact about how tight Redford got with Woodward and Bernstein to deliver a dramatic retelling of their quest, along with its close proximity, time-wise, to the original story makes this a rare occasion where a new medium does not sensationalize the history it depicts, it becomes a direct part of it.