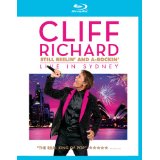 Cliff Richard’s music stardom predates that of the Beatles. So the fact that I wasn’t at all familiar with the British pop singer’s music before sitting down to review this Blu-ray probably says more about me than it does about him. Lucky for me, this career-spanning concert — which includes music from his time with the Shadows, some solo hits, and even his duet from the movie that partly inspired the creation of the Razzies — also doubles as a lively, CliffsNotes glimpse into Richard’s incredibly prolific and successful career.

Richard is 73 now, but he’s still able to tirelessly work every inch of the mammoth stage at the iconic Sydney Opera House, where this concert was filmed earlier this year. The singer made his first record at age 17, and had reached #2 on the British charts shortly after turning 18. The man knows how to entertain, even if he’s fooling absolutely no one with his unnaturally dark brown hair. (Tom Jones and Paul McCartney know what I’m talking about.)

Fortunately, charm and charisma are ageless, and Richard proves to be a funny, self-deprecating host. Even though this jam-packed concert film features 28 tracks — including a few medleys — Richard carves out plenty of time to express his gratitude for his Australian fans and joke around with the crowd. (“I know we’re filming a DVD, but you don’t have to overdo it,” he tells them after their enthusiastic applause following one of his hits.) He also introduces “Miss You Nights” as his “biggest flop.” (For the record, the song peaked at #101 in the Australian charts.)

The charm goes a long way because Richard’s pop rock catalogue isn’t the most musically adventurous material you’ll ever hear. A handful of numbers do stand out, including “Dreamin’”, his “12th of Never” duet with overqualified backup singer Suzie Furlonger, and the jam-session vibe of “I Don’t Care if the Sun Don’t Shine.” The set also includes some of his biggest hits, like “Devil Woman”, “Some People” and “We Don’t Talk Anymore”, but my favorite tune was “Wired for Sound”, which was also one of the more dynamic offerings.

Otherwise, the songs are inoffensive and just as likely to make you tap your toes as they are to float away from your brain as soon as they’re over. There are also some unintentionally funny moments involving some impressive/cheeseball choreography with a pair of guitar players/backup singers. (See, “Willie and the Hand Jive.”) A mid-set costume change for Richard into a bright red sports jacket/jeans/red shoes combo robs songs like “Ocean Deep” and “Suddenly” (his duet with Olivia Newton-John from Xanadu performed here with Furlonger) of their emotional punch.

Richard’s act seems to have influenced contemporaries like Rod Stewart (and musical descendants like George Michael). But watching the singer giddily shake his behind on stage comes off as if Richard is asking his audience, “Do Ya (Still) Think I’m Sexy?” Fortunately for him, the thunderous response throughout this energetic show seems to indicate the answer is yes.

5. Sealed with a Kiss

15. Willie and the Hand Jive

27. I Could Easily Fall/In the Country

Cliff Richard: Still Reelin’ and A-Rockin’ is presented in an aspect ratio of 1.78:1. The 1080i image is arrived at with an AVC MPEG-4 codec at an average of 32 mbps. Overall, this Eagle Rock Blu-ray presents a remarkably sharp and colorful HD image. The only exceptions are a bit of digital noise on the brief establishing shots of the Sydney Opera House, and the occasional wide shot of Richard on stage that looks soft, but doesn’t last more than a second or two. Medium shots and close-ups are consistently excellent, with the former revealing details like barely visible wisps of smoke behind Richard, and the latter giving you a better appreciation of Richard’s get-up. (Particularly his second, more colorful outfit.) Black levels are deep when they need to be (like when we see darkened shots of the crowd), but the lights occasionally come on to reveal the animated live audience.

The DTS-HD Master Audio 5.1 track is carried — as are many of Eagle Rock’s finest offerings — by a robust bottom end, which is reproduced wonderfully by the subs here. Not surprisingly, Richard has assembled a professional, tight blend of musicians, and the track allows each of their instruments a chance to shine. This is also a well-balanced track that never drowns out the singer’s vocals. (I really should’ve mentioned by now that Richard is still in fine voice.) The track also gives viewers a strong sense of immersion by placing the plentiful crowd noise in the rear speakers. You also have the option of listening to the show in LPCM stereo.

Behind the Scenes: (20:14) This featurette doubles as a love letter to Richard’s Aussie/Kiwi fans. With the Sydney Opera House in the background, the singer reminisces about the first time he came to Australia in 1961 for his 21st birthday. We also get a behind-the-scenes glimpse at the tour (costumes, singers, choreography) and the unique challenges of performing in the legendary venue.

If you’re a longtime Cliff Richard fan, this Blu-ray serves as an excellent encapsulation of his musical life. If (like me) you weren’t familiar with the man, this concert isn’t likely to make you run out and buy a bunch of his records. But it still functions as an enlightening survey of a legendary career.