Posted in: Disc Reviews by Gino Sassani on January 28th, 2014 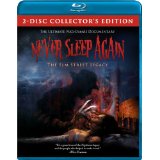 Freddy is one of the more memorable monsters from the slasher era that also brought us the Halloween and Jason films. Freddy might have been born in the mind of Wes Craven, but he grew and developed in the knife-wielding hands of Robert Englund. Granted, not all of these films are equal in quality. The first and third are the best story-wise, while the last might be the most unpredictable and original. The fourth and fifth films are a hoot if you don’t look too carefully for a plot. Look to see how many actors you can find who later went on to bigger and better things. There were quite a few, most notably Johnny Depp.

Now I know what you’re thinking. Why should I pay my hard-earned money to buy a documentary on a film franchise? I hear you loud and clear. You figure that most of this information you already know. You’ve seen bits and pieces of a lot of this stuff on DVD and now Blu-ray extras. Why should you buy an independently-produced documentary? Because you should. That’s why. Here’s the proof.

The documentary begins with some rather sweet stop-motion opening credits. These continue to provide nice transitions from subject to subject. The piece is set up in a very logical order. Everything Freddy is covered here. There is a chapter on every one of the films. This includes the Freddy vs. Jason film and the television series Freddy’s Nightmares. There is even a little bit on the remake, although this documentary really stays on the subject of the Robert Englund versions of Freddy. Just about everybody who has ever been involved in the franchise participates in this thing. You get pretty much all of the main actors with the very notable exceptions of Johnny Depp and Patricia Arquette. It could very much have been their schedules that kept them out of the piece. But the documentary doesn’t stop with the actors. Many members of the crew including the many directors, writers, musicians, and production crew offer up their thoughts on the franchise. The entire piece is narrated by Heather Langenkamp.

The piece runs for a full four hours. There is no fluff here at all. This is four solid hours of interviews and insights. There are only very brief clips shown, so don’t worry about running times padded with showing the same clips over and over again. There are very few, and they are extremely brief. Many of the actors provide some humorous reenactments from their moments in the film. Wes Craven is particularly candid here about his thoughts on the directions the franchise often found itself. This is not your standard love-fest that only talks about the positives. There are many stories of anger and frustration that are delivered with some of the most brutal honesty you’re going to see in one of these types of pieces. There are over 100 participants on this thing. It’s the largest assembly of Freddy people that has ever been put together. You’ll get all of the stories. If you think there isn’t anything Freddy you don’t already know, think again. There’s something new here no matter how much you think you know.

This is all pretty much the same stuff we got on DVD a few years ago. I’m excited about having it now in high definition. Yes, it’s really just interview stuff but I think it’s worth the upgrade.

Never Sleep Again is presented in its original aspect ratio of 1.78:1. The 1080p image is arrived at with an AVC MPEG-4 codec at an average 25 mbps. This is a documentary, so some of the footage will be a little rough. Most of the participants are sitting in front of a green screen, and yeah, it’s obvious at times. The focus here isn’t on what you can see. It’s what they all have to say.

The DTS-HD Master Audio 2.0 is perfect for a dialog piece. This is all about the interviews. The only question you should have is: can I hear what they have to say? Yes, you can.

There is an Audio Commentary. Yes, an audio commentary on a documentary. Just in case you don’t get enough from the four hours of interviews, the crew for the documentary has a lot more to tell you. There’s some very interesting information here. Of course, the only problem is that it will take you eight hours to get it all.

Extended Interviews: (1:41:07) There is extra stuff from all of the chapters.

First Look – Heather Langenkamp’s: “I Am Nancy”: (6:53) It’s a sneak peak at Heather’s own documentary on the Freddy phenomenon.

For The Love Of The Glove: (18:13) Not only do you get anything you ever wanted to know about Freddy’s knife-glove, you’ll meet all kinds of folks who have turned that glove into a business.

Fred Heads – The Ultimate Freddy Fans: (12:53) This piece introduces you to some pretty die-hard fans. It also examines the allure of Freddy and why he’s so popular.

Horror’s Hallowed Grounds – Return To Elm Street: (23:10) This television episode tours some of the real-life locations from the first film. A few cast members drop by to revisit and replay some of their classic scenes.

Freddy vs. The Angry Video Game Nerd: (5:34) Short film about a video game reviewer who gets stuck in the past reviewing old games. Next up? A review of the NES Nightmare game.

Expanding The Elm Street Universe: (15:43) A look at comics and novels that keep the Freddy image alive.

The Music Of The Nightmare: (13:39) Meet some of the musicians and composers who have worked on the franchise.

A Nightmare On Elm Street In 10 Minutes: (10:05) Cast and crew members redo famous lines from the film series.

Here’s the thing: either you love Freddy or you hate him. Entering Freddy’s world is like one giant haunted house at your local amusement park. There’s enough going on that you can usually see new things on repeated viewings. Maybe what makes this series more effective than some of the others is the material itself. We can all try to avoid the creepy places and people in life, but we’re all prisoners of our dreams. It’s the one place where we are a captive audience. Invite Freddy and you never know what’s going to happen. This documentary tells it all. “Welcome to prime time….”

Gino Sassani is a member of the Southeastern Film Critic's Association (SEFCA). He is a film and television critic based in Tampa, Florida. He's also the Senior Editor here at Upcomingdiscs. Gino started reviewing films in the early 1990's as a segment of his local television show Focus. He's an award-winning recording artist for Omega Records. Gino is currently working on his 8th album Merchants & Mercenaries. Gino took over Upcomingdiscs Dec 1, 2008. He works out of a home theater he calls The Reel World. Favorite films: The Godfather, The Godfather Part II, The Body Snatcher (Val Lewton film with Karloff and Lugosi, not the pod people film), Unforgiven, Gladiator, The Lion King, Jaws, Son Of Frankenstein, The Good, The Bad And The Ugly, and Monsters, Inc.
Vikingdom Stonados