Posted in: Disc Reviews by Gino Sassani on January 29th, 2014 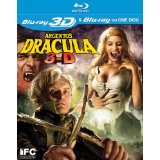 “This evening I finally met Count Dracula. He is younger than I expected, although his behavior and his demeanor seem to somehow contradict his appearance.”

Dracula and vampires in general have taken on many appearances and personalities over the years. He has been portrayed as the suave European gentleman and a vicious gaunt creature best left to the shadows. Lately vampires have taken on the angst and yearnings of adolescence. Dracula has been around since 1897 when Bram Stoker wrote his groundbreaking novel. The evolution of the genre continues today and will likely produce stranger forms of the character in the future. But leave it to Spaghetti Nightmare maestro Dario Argento to return the man and the movie to its classic roots. Argento does so in grand gothic style that channels the spirit of both Universal’s classic creations and Hammer’s atmospheric bloody nightmares with Argento’s Dracula.

The story uses the familiar characters from the Stoker novel. There are some creative changes. In this film Dracula (Kretschmann) has seen a photograph of Mina Harker (Gastini). She looks exactly like his wife who died 400 years earlier, and Dracula is certain Mina is the reincarnation of his beloved. So he lures Jonathan Harker (Ugalde) away by hiring him to catalog his impressive and ancient library. Of course, Harker soon falls under the bite of Dracula and his temptress Tanja (Giovanelli). With Jonathan out of the way, Dracula seduces Mina through her friend and confidant Lucy (Argento). Eventually, Professor Abraham Van Helsing (Hauer) arrives to put an end to Dracula and his schemes forever.

Dario Argento has never really been a prolific director. He had a pretty good run in the 1970’s and 80’s, but his production fell off sharply in the last couple of decades. And while he may not have given us a great number of films, what he has directed has been memorable. His films have inspired generations of horror filmmakers around the world. Argento pushed boundaries that found him up against censor boards throughout the world. Each time he held his ground as well as he could and refused to compromise on his own, some might call twisted, visions. His Suspiria has been the talk of remake for years, but I can’t imagine anyone would be able to build on the terrifying imagery that film portrays. Those are images that linger for a lifetime. I’m incapable of having nightmares. It’s a part of the human condition I actually envy in others. Thanks to Argento, I at least got a glimpse at what these nightmares might look and feel like. It’s good to see him back in action, and Dracula is the perfect vehicle for a mainstream release attempt.

The first thing you notice with Dracula is how much attention to atmosphere and mood Argento gives. The sets are very reminiscent of the early Hammer films, and you can almost find a place in that cannon for this film. It might surprise Argento fans that he has mastered the art of subtlety here somewhat. Dracula as a character is more reserved than you might be used to. Thomas Kretschmann is not the suave, debonair character, nor is he at all hideous or deformed. This might be the most everyman Dracula you have seen. Instead of overt appearances and actions, Argento allows the power of this Dracula to come from inside. There’s a confidence in his stride, an arrogance in his demeanor that doesn’t need to be exaggerated to be effective. Kretschmann certainly wouldn’t be my first choice to play the iconic vampire, and perhaps that works very much to the film’s advantage. The important trappings are there, yet this is still a new and original take on the story and character. I think the best quality that Kretschmann provides is the sense of a character who really has lived for centuries. There’s a calmness that appears to have been born from the patience immortality requires.

It’s not an extremely bloody film. Argento exercises considerable restraint in that department. Dracula’s attacks are mild compared to much of what we’ve seen today. Argento appears to understand that what once might have been shocking and groundbreaking is too common place today to offer much effectiveness. That isn’t to say he doesn’t still deliver some classic Argento elements. There’s the obligatory eye-gouging, an ax murder, and a nice decapitation for the ageless fans. The truth is that most of the bloody carnage doesn’t come from Dracula, but rather the human characters in the film. There’s a message in there somewhere, and I’m sure it was deliberate.

The f/x on the film are a good mix of practical and computer-generated images. Argento appears a bit ill at ease with the new technology and the results are mixed. There are some excellent results. The dusting of a couple of vampires is absolutely amazing. Dracula transforms into many kinds of beasts in this film. He is an owl, and there’s a particularly awesome wolf transformation. It’s not an edgy Werewolf In London affair. It’s actually rather simple, but with a kind of elegance. There are also things that just don’t work. Dracula is a giant preying mantis in a scene that really needed to be cut from the movie. It’s an unfortunate piece of film that completely ruins the atmosphere and credibility that was so carefully earned throughout the rest of the film. I don’t know what he was thinking here, but it’s a serious flaw that transforms a moody gothic film into a farce for a few minutes and has negative impact on the film as a whole.

The cast is up to the task. It’s no surprise that he uses his daughter Asia Argento. Here she plays Lucy, who helps Dracula infiltrate the Harker household. Marta Gastini plays Mina with a rather attractive reserved style. The actress gave completely over to the part and is likely a huge credit that Argento still knows how to manipulate his characters. It’s a very pleasant experience to have Rutger Hauer play Van Helsing. The sad part is that he doesn’t even arrive until the last half hour of the movie.

Argento also knows how to honor the roots that aren’t tied to his own work and the expectations they carry. There are nods to what has come before. There’s a homage to Lugosi with his “children of the night” line. The result is a film that plays out like a love letter to his fans and horror fans in general. You don’t have to know anything about Dario Argento to appreciate what we have here.

Argento’s Dracula is presented in its original aspect ratio of 2.35:1. The high-definition 3D image is arrived at using the standard duel MVC codec at an average 25/15 mbps. There isn’t a lot of color to this high-definition image presentation. At times it looks almost monochromatic. You get mostly earth tones amidst a dark background. Still, the image manages to deliver nice textures and detail. The black levels are necessarily impressive. Without solid shadow definition this movie could easily get lost in a murky mess. The 3D elements do give you a few of those pokes that are intended to show off the 3D. Of course, you get a nice stake in the eye. Mostly they do help to fill out the environments. It was easy to forget that I was watching a 3D film and found most of it quite natural. It’s all about the atmosphere here, and you certainly won’t be disappointed in that.

The DTS-HD Master Audio 5.1 is one of the more subtle surround mixes you’ll find. The flutter of wings in the distance can actually have a rather chilling effect. Dialog cuts through even though most of the delivery here is quite hushed. It seems as though all of the actors are whispering at times. That’s fine here, because the mix allows them to cut through.

Behind The Scenes: (1:03:53) This is mostly in Italian. It’s not so much behind the scenes as it is a talk on the production. I found it a bit dry and overlong.

They don’t really make films like this anymore. Unfortunately, even this movie is touched by the modern era that can deliver any image the mind can imagine. Argento’s Dracula goes off the tracks only when he succumbs to those modern temptations. Thankfully, these moments do not dominate the film as a whole. Argento’s style isn’t really for everyone, but this film actually is. It’s a perfect blend of his own unique vision, a more mainstream approach, and the classic horror film. Argento isn’t resurrecting Dracula here. He’s bringing the entire genre back from the dead. The result proves that most of the time the two eras can work quite nicely together. Just don’t include any more mantis shots. This is a great film to watch on a dark and stormy night. “Remember to close your shutters tight.”

Gino Sassani is a member of the Southeastern Film Critic's Association (SEFCA). He is a film and television critic based in Tampa, Florida. He's also the Senior Editor here at Upcomingdiscs. Gino started reviewing films in the early 1990's as a segment of his local television show Focus. He's an award-winning recording artist for Omega Records. Gino is currently working on his 8th album Merchants & Mercenaries. Gino took over Upcomingdiscs Dec 1, 2008. He works out of a home theater he calls The Reel World. Favorite films: The Godfather, The Godfather Part II, The Body Snatcher (Val Lewton film with Karloff and Lugosi, not the pod people film), Unforgiven, Gladiator, The Lion King, Jaws, Son Of Frankenstein, The Good, The Bad And The Ugly, and Monsters, Inc.
Treme: Complete Series (Blu-ray) Cloudy with a Chance of Meatballs 2 (Blu-ray 3D)