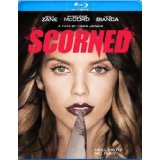 This column strongly opposes cheating on your significant other. But if you absolutely can’t help yourself, you’ve got to be smarter about it than the numbskull played by Billy Zane in this film. In Scorned — a junky, over-the-top cross between Fatal Attraction and Misery — his girlfriend is an admitted manic-depressive who regularly takes as much medication as she can stuff in her purse. So what exactly did this dolt think would happen when she found out that he was sleeping with her best friend?

To be fair, Kevin (Zane) probably expected his crazy girlfriend Sadie (AnnaLynne McCord) to take his infidelity harder than most. But he definitely didn’t anticipate Sadie tying him and his lover/Sadie’s best friend Jennifer (Viva Bianca) up and terrorizing them. The synopsis for Scorned warns, “if you do get caught, you’d better hope your lover isn’t secretly insane,” which is a ridiculous statement considering that Sadie is *openly* insane.

The film opens by flashing some incriminating text messages — “Do U think she has any idea?” “Not a clue baby…”— and throws us right into Sadie’s sadistic game. Kevin is tied up and nursing a head wound, while Sadie uses his phone to lure Jennifer (and her little dog too) to the remote vacation home where they’re staying. The story briefly flashes back to happier times — 28 hours earlier, to be exact — before Sadie embarks on her campaign of psychological torture (emphasis on the word “psycho”) and actual torture (think broken fingers in a vice, shock treatment and forced tooth extraction). Oh, and I forgot to mention Kevin’s vacation house is close enough to a prison that an escaped convict prowls around the margins of the story for much of the film’s second half.

Writer/director Mark Jones (the auteur behind Leprechaun) is responsible for this low-budget, over-the-top insanity. He co-wrote the script with actress Sadie Katz, who also has a cameo in the film. (I’m not sure what it says about Katz that the spectacularly unstable main character is named “Sadie”…hopefully nothing.) Parts of the movie — including whacked out transitional scenes with atonal songs on the soundtrack — are as manic and unstable as its lead character. For better or worse, these bits had a real charge to them that’s missing from too much of the film.

It’s not for lack of trying from the actors. I first noticed McCord (90210) when she played an alluring vixen on Nip/Tuck. In Scorned, she fully commits to her unhinged character, despite being saddled with an unfortunate Southern accent. The film gives us glimpses into the childhood trauma that caused Sadie’s instability, but I felt it might’ve been nicer if McCord (and the filmmakers) let us have a peek at the real human being who was genuinely hurt by Kevin’s betrayal. Then I remembered this was made by the same guy who directed Leprechaun. Oh well.

Zane — as Sadie’s older, richer lover — has noticeably let himself go, but is still handsome enough to pull off the rich prick character he perfected in Titanic. (At least he’s not forced to wear a stupid hat or cram himself into a uniform this time.) The actor also finds the dark comedy in Kevin’s pathetic escape attempts and his exasperation with Sadie. Bianca starts out a bit flat — not a word typically used to describe the Spartacus actress — before coming alive when Jennifer grows a spine and decides to fight back.

The director has the tools at his disposal to make a tight, enjoyable thriller with a side of camp. (For example, having the story play out in something approaching real time might’ve been interesting.) Instead, the camp is tempered by a ponderous back story, while any potential Scorned had as a legitimate thriller is undermined by how poorly the film is made. (The staging of the sequence where Jennifer briefly escapes from Sadie after knocking her down near Kevin’s boat is embarrassingly bad.) The movie only clocks in at 86 minutes, yet it feels like Jones and Katz are struggling to fill out the running time with their convenient escaped convict thread and increasingly tedious torture scenes. Jones does get to show off his horror chops in the sneakily subversive final showdown that has an imposing man running away from a willowy (if crazed) woman.

As I mentioned before, Scorned pretty openly takes its inspiration from Fatal Attraction and Misery. Instead of boiling a bunny, Sadie places a dog in a microwave. Later, she directly references Misery as she prepares to smash Kevin’s foot with a sledgehammer. The difference between those two films and Scorned — besides world-class actors and production values — is the maniacs in Misery and Fatal Attraction were willing to follow their crazy schemes to their extreme ends. Scorned, as exhibited by Sadie throwing up mid-torture at one point, only has half the stomach.

Scorned is presented in an aspect ratio of 1.78:1. The 1080p image is arrived at with an AVC MPEG-4 codec at an average of 32 mbps. Most of the film takes place at night or in darkened interiors, and the Blu-ray reveals pleasing, warm tones, along with satisfactory clarity and only hints of digital noise during these parts. Close-ups are good, but not as razor sharp or detailed as I’ve seen in other HD offerings working with similar tools (and modest budgets). The image gets a noticeable bump in clarity during the handful of flashback scenes that take place during the day. (It also gives you some idea of what this Blu-ray could really do.) Although black levels are solid throughout the film, the daylight scenes give you a peek at some of the vibrant colors this disc is capable of conveying. Overall, Anchor Bay has given us a solid, unspectacular HD image.

The Dolby TrueHD 5.1 track, on the other hand, is often as farcically over-the-top as the actual movie. There’s a thunderstorm going on during much of the film, and the subs and rears never let you forget it. Fortunately, the overwrought sound effects and score play well with the dialogue, which always comes through clearly. Also, if you listen beyond the dramatically well-timed thunderclaps (subs!) you’ll hear a surprisingly dynamic presentation that puts you in the house with Sadie. (The rears place the falling rain all around you.) There’s even a good sense of immersion during an early outdoor lunch scene between Sadie and Jennifer.

The lack of special features isn’t exactly a shock, though I feel a commentary with Jones talking about his influences for this film might’ve been interesting.

AnnaLynne McCord certainly makes for a sexier, more pants-less tormenter than Kathy Bates did in Misery. Scorned is mostly lame rather than offensively awful. It’s a relatively harmless bad movie that will remind you of the superior movies you could be watching instead.