The Agony and the Ecstasy (Blu-ray) 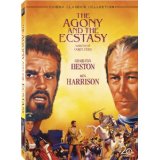 “The Sistine Chapel. The masterpiece of a sculptor who did not want to paint.”

Remember when Michael Jordan quit basketball, tried his hand at baseball, and then returned to the NBA less than two years later? Well, imagine if Jordan had actually made it to the majors with the Chicago White Sox and put up a .375/50 HR/50 SB mark on his way to winning the American League Rookie of the Year/MVP awards, along with a World Series ring. The artistic equivalent of that was Michelangelo — one of the most significant figures of the Italian Renaissance, but a sculptor by trade — painting the frescoes on the ceiling of the Sistine Chapel.

The Agony and the Ecstasy chronicles and dramatizes the four-year creation of one of the world’s most famous and revered works of art. The 1965 film — which earned Oscar nominations for Best Art Direction, Cinematography, Costume Design, Score and Sound — is making its Blu-ray debut, but we’ll get to the dazzling new transfer in due time.

Charlton Heston stars as Michelangelo, which is funny because, according to Hollywood legend, a big part of the reason the actor was cast in his iconic role of Moses in The Ten Commandments was because of his strong resemblance to the sculpture by Michelangelo. In The Agony and the Ecstasy, the Florentine artist is living in Rome after being commissioned to craft the tomb of Pope Julius II (Rex Harrison). The pope, however, orders Michelangelo to stop work on the tomb and paint frescoes depicting the 12 apostles on the ceiling of the Sistine Chapel, which is described as having the architecture of a “cow barn.” Michelangelo naturally bristles at the request, but eventually agrees to take on the project after experiencing a stroke of divine inspiration. (The stroke of inspiration actually leads into the movie’s “Intermission” at about the one-hour mark.)

The film is right in line with the grand, popular historical/biblical epics of their time, several of which starred Heston. This one is partly based on Irving Stone’s 1961 Michelangelo biographical novel of the same name, but the screen version — despite the impressive, larger-than-life scale employed by director Carol Reed (The Third Man) — is largely a duet between Oscar winners Heston and Harrison.

The Agony and the Ecstasy certainly lives up to its title by showing us the physical toll Michelangelo’s project takes on both men (not to mention the invading French and German forces at the Pope’s doorstep). But it turns out the movie is also pretty darn funny. Besides the comical, recurring exchange between the artist and the pope — Pope Julius: “When will you make an end?” Michelangelo: “When I am finished!” — there’s a terrific sequence when Michelangelo is pitching new ideas for the ceiling to an enthralled Pope even as cannon fire explodes around them.

The film versions of these historical figures are basically treated as equals who know how to push each other’s buttons. (Pope Julius knows exactly what to say to a frail Michelangelo to get him back on track, while Michelangelo pushes an ailing Julius to live long enough to see the ceiling’s completion.) On top of that, Michelangelo is mostly able to get away with his blatant defiance of Pope Julius, who is considered “a better warrior than pope.” Of course, the reason the Pope gives Michelangelo so much leeway is because he recognizes and admires the artist’s singular talent and drive to achieve perfection.

Besides looking like a marble figure himself, Heston was an ideal to choice to bring that aspect of Michelangelo’s passionate personality to life. The actor had a credible enough presence to stand up to a king, and he had the riveting oratorical skills to articulate Michelangelo’s fanatical artistic drive. Harrison plays the more playful character, but is still able to effortlessly command the screen. His Pope Julius comes off as a paranoid zealot when he’s discussing affairs of the state, but becomes visibly more engaged and relaxed when he’s discussing art with Michelangelo. (Even when the two are yelling at each other.)

Of course, the side effect of turning the story into a two-person affair is that some of the other characters get marginalized. Harry Andrews actually does remarkably well in his relatively limited screen time as Bramante, the Pope’s practical architect who disapproves of Michelangelo’s painstaking perfection. On the other hand, Raphael is mostly treated as a scrub. Then there’s Tessina (Diane Cilento), who would be Michelangelo’s love interest if Michelangelo weren’t totally consumed by art and had time for a love interest. As a result, the movie doesn’t totally have time for her.

Speaking of time, it’s not made very clear how much time Michelangelo has spent working on the Sistine Chapel’s ceiling at various points of the film; we just know it’s taking a long while. The film opens with a 13-minute examination of Michelangelo’s life and art that doesn’t technically have anything to do with the story, but gives you useful background in case the only Michelangelo you know is this one.

The Agony and the Ecstasy is presented in an aspect ratio of 2.20:1. The 1080p image is arrived at with an AVC MPEG-4 codec at an average of 38 mbps. Here’s how mind-blowingly good this transfer is: the opening, aerial shots of St. Peter’s Cathedral look as if they could’ve been filmed today. As I mentioned, the film’s first portion highlights Michelangelo’s most famous real-life works, and this Blu-ray serves as a wonderful conduit. There is amazing detail and shadow definition on every work of art displayed, which helps you better appreciate Michelangelo’s genius. It’s basically a trip to a museum without having to leave your couch.

Once the story properly begins, we’re treated to a bright, sunny palette that never becomes blindingly so. Speaking of bright, the white marble of the Carrara quarries is resplendent. Skin tones are a bit tan and brown, but I think that’s actually appropriate for characters like Michelangelo and the “warrior” Pope Julius, who do most of their work outdoors. There are also vibrant pops of colors in the Pope’s court, mostly blazing reds. In short, this is a transfer worthy of the artist being depicted.

The DTS-HD Master Audio 5.1 track is absolutely a cut above some of the other re-mastered Fox Studio Classics titles I’ve had the chance to review. The 5.1 mix pushes much of composer Alex North’s propulsive, grandiose, Oscar-nominated score to the rears, creating a rich and immersive surround sound field. (Legendary composer Jerry Goldsmith’s work on the film’s opening portion is uncredited.) While the rears are largely used to crank out the score, the subs have a few standout moments thanks to battlefield cannon fire. What the film might lack in fine, dynamic detail or ambient noise, it makes up for by pumping up the score and sound effects to the rest of the production’s extravagant heights. The only drawback is dialogue that occasionally sounds hollow, along with a choral score by Franco Potenza that doesn’t translate quite as well as North and Goldsmith’s work.

The informative mini-documentary that kicks off the movie helps make up for the lack of substantial special features on this release. Still, I’m a sucker for a good film historian/critic commentary, so I would’ve loved to have gotten production details like how they re-created the frescoes in the Sistine Chapel for this movie.

The Agony and the Ecstasy is a historical epic made in the lavish, Old Hollywood way that has been mostly abandoned. But thanks to this new Blu-ray, the film looks and sounds better than ever.