Posted in: Disc Reviews by Gino Sassani on March 3rd, 2014 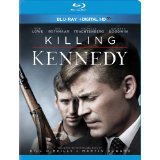 Before November 22, 1963, that name was an obscure one, known only to a few people in the intelligence community who had him under surveillance for his communist leanings. But by a little after noon on that date in Dallas, Lee Harvey Oswald was suddenly one of the most infamous names in American history. He would share the stage with the likes of John Wilkes Booth. This last November saw the 50th anniversary of the JFK assassination, and it passed with surprisingly less hype than I expected there would be. We weren’t inundated with documentaries and History Channel specials on the many conspiracy theories surrounding the event. There were some, certainly, but the date passed in the more solemn manner appropriate to the event.

One of the better things to come from the date is the publication of Killing Kennedy by Fox News’ Bill O’Reilly and Martin Dugard. As in Killing Lincoln, O’Reilly delivered a factual-based narrative that manages to provide new information on an event that had appeared beaten dry over the years. The movie that follows is another solid testament to the fact that you can deliver the facts and still deliver a compelling film.

If you’re looking for conspiracy theories here, look elsewhere. The film approaches the Kennedy assassination from the official point of view. The film places the blame squarely on the back of Lee Harvey Oswald. It’s the Lone Gunman story. What the film adds is not new ideas. Instead we get a closer look inside the mind of Oswald than we’ve ever seen before in one place. While not as startling with information as Killing Lincoln was, this film has a lot to offer to the more serious historical student.

The movie takes two paths. It’s almost as if there are two movies in one. The first path follows John F. Kennedy, played surprisingly well by Rob Lowe, from his first days in Office. With his wife Jacqueline (Goodwin) and brother Bobby (Noseworthy) we get an inside look at the big milestones of his brief time as president. The film touches upon the Bay of Pigs disaster, Cuban Missile Crisis, and even the problems with Kennedy’s lady friends. Lowe does a pretty solid job of portraying him more as a man than the legend that his tragic ending has made him today. I appreciate that Lowe doesn’t go out of his way to exaggerate the accent and mannerisms the way most JFK portrayals have done in the intervening years. This is by far the most human version of Kennedy I’ve seen on film or television. It’s interesting to note that Lowe appeared for years with Martin Sheen on The West Wing. Sheen, of course portrayed Kennedy in 1983’s Kennedy.

Unfortunately, the same can’t be said for Ginnifer Goodwin as Jackie. Most of you know her as Snow on ABC’s Once Upon A Time. It’s no accident that she’s the weakest member of that cast as well. My issue is she appears to lack any sincerity in either role. She has a fake smile and way of carrying herself that reminds me of a young girl playing dress-up with her mother’s clothes and makeup. She was a bad choice on Once Upon A Time, and she’s an even worse choice here. She shares absolutely no chemistry with Lowe and brings down the film’s credibility with every scene. I know I might be sounding harsh here. It’s frustrating. In both cases she has the chance to play against absolutely brilliant acting, but it just never seems to raise her game.

The second film is the more informative. The stuff of Kennedy’s administration was the stuff of global headlines, and while we see a wonderfully human aspect to it here, we do know the major beats. Most of us are not so familiar with the life of Oswald before the assassination. Once again, as in Killing Lincoln, we get a rather detailed look at the disturbed mind of Oswald. That’s made doubly so with a perfect performance by Will Rothhaar. He has mostly television credits to his name, but he does a pretty solid job of blending into the person of Lee Harvey Oswald here. He does have an at times startling resemblance, and the way he inhabits the character is a little uncanny.

Oswald was disillusioned with the capitalistic society in which he lived. He defected to Russia for a time but never really found what he was looking for there, except a wife Marina (Trachtenberg). Lucky for him the State Department never processed his defection, and he was allowed to return to the United States. When Castro’s revolution finally took Cuba he attempted to defect to Cuba, but they didn’t want him. Of course, all of this anti-American activity brought FBI attention to Oswald, and his movements were followed. Apparently not well enough.

Oswald also wanted fame. He would rehearse answers to imaginary press conferences, and his obsessions would end up costing him his wife after he attempted to kill a general. Oswald wasn’t particularly obsessed with JFK, but he happened to be in the wrong place at the wrong time for history’s sake. When Kennedy’s motorcade was routed to the street outside his job at a book depository, the chance to carve his name into history proved too much for him.

The production design of the film does a very good job of bringing the early 1960’s to life. The costumes are quite authentic. The film incorporates footage that almost exactly duplicates the grain, angles and style of the famous Zapruder images that are so ingrained in our collective consciousness.

While I enjoyed Killing Kennedy and found the approach to be refreshing, I was a little disappointed that they abandoned the formula used in Killing Lincoln. There is no narrative, and I missed that one person who put the events into a certain perspective for us. That makes Killing Kennedy much more like a typical movie than its predecessor, and I consider that a bit of a missed opportunity, to be sure. Still, you have to credit that all involved resisted the temptation to cater to the conspiracy crowd or to submit to a more overdramatic style. The result is a film that definitely lives in its own space and stands out because of it.

Killing Kennedy is presented in its original aspect ratio of 1.78:1. The 1080p image is arrived at with an AVC MPEG-4 codec at an impressive average of nearly 40 mbps. The high-definition image presentation is nearly flawless. This is digital filmmaking for realism at its best. The image has some wonderful moments where it needs to blend with imperfect historical footage, and it accomplishes this quite convincingly. Black levels are tight. Colors provide just that slight muting to style the period. Deep blues stand out exceptionally. The textures come through well on costumes but even better on facial close-ups. Lowe’s mannerisms are subtle but captured for full effect here.

The DTS-HD Master Audio 5.1 is really a dialog piece. The score has its moments, but this is totally about the people and what they have to say. It’s all crisp and clean. The sound design doesn’t really task the presentation, and you get exactly what you expect.

Camelot’s End – The Making Of Killing Kennedy: (19:33) Cast and crew spend most of their time talking about the impact of JFK and the assassination. They share their own personal feelings as well. From there they do talk about recreating these people and events.

An Interview With Bill O’Reilly: (6:06) Well… it’s not really an interview. These are Bill’s sound bites about the film taken from the set of his show.

The Kennedy Mystique: (6:38) Plenty of actual historical footage dominates this look at the Kennedy legacy.

The assassination of John F. Kennedy changed America forever. There can be no argument that it was a defining moment in our history. Since then it has taken on a life of its own with more theories than there are on the nature of the universe. No one film can ever hope to capture all of that history and emotion. This film manages to capture the human element, so overlooked in all of this mania. Oswald and Kennedy were living, breathing human beings like each of us in more ways than they were not. If you want to see that story, this is the place to look. We are definitely not “heading into nut country today”.

Gino Sassani is a member of the Southeastern Film Critic's Association (SEFCA). He is a film and television critic based in Tampa, Florida. He's also the Senior Editor here at Upcomingdiscs. Gino started reviewing films in the early 1990's as a segment of his local television show Focus. He's an award-winning recording artist for Omega Records. Gino is currently working on his 8th album Merchants & Mercenaries. Gino took over Upcomingdiscs Dec 1, 2008. He works out of a home theater he calls The Reel World. Favorite films: The Godfather, The Godfather Part II, The Body Snatcher (Val Lewton film with Karloff and Lugosi, not the pod people film), Unforgiven, Gladiator, The Lion King, Jaws, Son Of Frankenstein, The Good, The Bad And The Ugly, and Monsters, Inc.
The Agony and the Ecstasy (Blu-ray) Wicked Blood (Blu-ray)