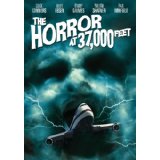 On a flight from London to Los Angeles, an artifact taken from an ancient, Druidic ritual site is being transported in secret. During this flight a malevolent deity looks to exact revenge on the passengers for the desecration of the site that was used for sacrifices (this bit of information is pretty disposable. Sacrifices just sound better when vaguely referring to a pagan religion in a modern story). Now it’s up to a band of 1970s b-listers like Chuck Connors, Buddy Ebsen, Paul Winfield and (lord help us) William Shatner to fight off this killer spirit.

Once in a while a film offers a gift to its reviewers. By describing this film I shall also provide a perfect analogy for the response it gives me. All criticisms I could possibly conjure are written right into the pacing and performances within The Horror at 37,000 Feet…and I thank it for that.

The flight takes a while to take off (just like how the film is slow to get interesting) and when it does start moving it literally stops in mid-air and is held in place by some mystical force (in the same way that the pace of this film grinds to halt). While the captain and his crew try to discover the cause of this phenomenon they serve unlimited drinks to the passengers, for some reason, and turn them into a band of stumblers (just like the odd, inconsistent performances by the actors). As the spirit makes itself known moss literally starts to grow on the inside of the plane (I mean, c’mon movie…make this a little bit harder for me! Actual moss is growing?! Could I ask for a better analogy for how slow and dull this movie is?!).

Eventually the bodies start to pile up as the spirit manifests itself in the form of wind, ice and gas. There are a couple of scenes of action but mostly what we see is those aforementioned character actors drinking and arguing with a rhinestone cowboy and a Mia Farrow lookalike. In the end we’ve got a story that could have worked better as an episode of the Twilight Zone (not to mention William Shatner already famously did a better airline horror story on Twilight Zone called “Nightmare at 20,000 feet”).