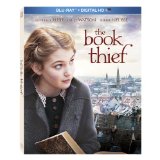 “One small fact: you are going to die. Despite every effort, no one lives forever.”

The Book Thief is narrated by Death, who opens the film with these sobering words. It is also set in Germany during the years leading up to World War II. On paper, the best-case scenario for this film appears to be “well-executed, watchable downer”, while the worst-case scenario is “do we really need *another* movie about WWII?!” But fans of Aussie author Markus Zusak’s 2005 best-seller know better. The Book Thief uses the silky specter of death to tell a beautifully affecting story that celebrates life.

Liesel Meminger (Sophie Nelisse) is a pre-teen girl in 1938 Germany who catches a glimpse of Death (voiced with velvety relish by V for Vendetta’s Roger Allam), when it claims her younger brother during a train ride. Liesel’s mother was on her way to drop the kids off with their new foster parents for reasons Liesel is too young to understand. The nearly-mute girl is taken in by Hans and Rosa Hubermann (Geoffrey Rush and Emily Watson), who live in the ironically-named Himmel Street. (“Himmel” is the German word for “Heaven.”) Hans is a kind, out-of-work painter who has resisted joining the Nazi party, while the harsher Rosa serves as the proverbial bad cop when it comes to parenting Liesel.

While growing up with the Hubermanns, Liesel joins the Hitler Youth army along with her loyal best friend Rudy Steiner (scene-stealer Nico Liersch). One night, a young Jew named Max Vandenburg (Ben Schnetzer) arrives at the Hubermanns’ doorstep asking for help. Over the years, Max, Liesel and her adoptive parents become a surprising family unit as they work to keep Max hidden from the Germans. As war looms and the horrors of the outside world threaten to break in, Liesel finds solace in the books she steals whenever she gets a chance. She’s not picky; Liesel grabs whatever is on hand, whether it fell out of a grave digger’s pocket or it’s the lone book to survive a public book burning.

Since there is such a massive existing catalog of WWII-themed films, even a story that frames the conflict through the eyes of a child feels familiar. The most famous example, of course, is the various incarnations of The Diary of Anne Frank, along with more recent entries like The Boy in the Striped Pajamas. The Book Thief is rated PG-13, so it maintains the thematic seriousness this particular topic demands, but it stops short of any extreme R-rated exploits.

As a result, The Book Thief has a storybook vibe that simultaneously feels appropriate and doesn’t reduce the seriousness of the material. Liesel can’t even read yet by the time she steals her first book. (“The Grave Digger’s Handbook.”) Hans gently helps her along, and Rush finds the same, devilishly playful sweet spot that earned him a well-deserved Oscar nomination for The King’s Speech. Meanwhile, the audience keeps waiting for Watson to show us the softer side of her character (and she does). But the more important realization comes when we understand that Rosa’s hard demeanor is her way of protecting the people she loves.

The Book Thief is un-showily directed by Brian Percival, who is best known for his meticulous work on Downton Abbey. He brings that same attention to detail to this film; Himmel Street feels like its own vibrant ecosystem. (Although it’s not clear why the characters mostly speak German-accented English, except for a handful of conversations that are in English-subtitled German.) Percival also brings a pleasing, leisurely pace and a nice touch in dealing with his young, relatively inexperienced actors.

Nelisse holds the film together quite well, but the real feat is the way the character convincingly matures from pre-teen through adolescence and into young adulthood. She lets us see Liesel is an exceedingly curious person, even when she’s not speaking very much. (One of Nelisse’s finest acting moments is the look of awe on Liesel’s face when she sees a library for the first time.) Liersch, with his piercing blue eyes and “lemon-colored hair”, looks like the poster boy for Hitler’s master race. So it’s a kick to learn that Rudy is a funny free spirit who idolizes Jesse Owens and whose big goal in life is to get a kiss from Liesel.

Eventually, Liesel uses words to better express herself and to bond with Max, although the precise extent of their connection felt a little glossed-over. The Book Thief has a poignant, devastating ending that I really should’ve seen coming when you consider how much the story is fixated on death. Hitler may have thought he could live forever, but The Book Thief makes the point that words can help a person achieve immortality.

The Book Thief is presented in its original aspect ratio of 2.40:1. The 1080p image is arrived at with an AVC MPEG-4 codec at an average of 24 mbps. Usually, when an HD image pops or is described as vibrant, it’s because there are big bold colors on display. This Blu-ray goes a different way and highlights a dazzling array of whites. Right from the opening scene, you can see the difference and dimension between the white color of clouds, and the white color of snow. That ever-present snow is also what makes the image pop, given that most of the characters on Himmel Street wear drab grays, browns and dark blues. (The one notable exception is the splash of red that infects the screen whenever a Nazi flag pops up.) At the other end of the spectrum, I felt like the black levels could’ve been a bit deeper during interior scenes set inside the Hubermann home. Despite the persistently chilly image, there are warm skin tones on display here. There’s also a good amount of detail on close-ups, including the tiny scratches on a piece of chalk. This is another exceptional effort from Fox.

The DTS-HD Master Audio 5.1 track swells impressively throughout the sound field, whether we’re listening to John Williams’ richly understated score or a train chugging along. As I said before, director Brian Percival’s vision of Himmel Street was very detailed. The immersion provided by this well-balanced, subdued track — snow casually and constantly gusting through the rears — helps sell the film’s setting as a lived-in world. The German-accented dialogue always comes through crystal clear. Finally, the subs provide a room-rattling rumble anytime the Hubermanns take shelter during an air raid. The fact that the subs are almost completely quiet throughout the rest of the film makes their spare use during these scenes even more effective.

A Hidden Truth: Bringing The Book Thief to Life: (31:05) These four featurettes are lumped together here and worthy of your time. “An Inspirational History” (5:00) features author Markus Zusak talking about how his parents’ stories of growing up in Germany inspired the novel. “Finding the Thief and Her Family” (9:38) naturally focuses on the casting process, which involved looking at more than 1,000 potential Liesels. “Bringing the Past to Life” (10:21) highlights the impressive production design and the film’s on-location shoot in Germany, which involved -19 degree weather. Finally, “The Legend and the Music” (6:22) takes us inside a recording session with the legendary John Williams, who earned his 98th Oscar nomination for his work on The Book Thief. (Ok, fine…that was an exaggeration. Williams’ nomination for this movie was “only” his 49th. That’s still a ridiculous number and the most among any living person.) Features a Play All option.

Deleted Scenes: (6:34) These four scenes give us a bit more narration from Death, and a glimpse at Max’s perilous journey to the Hubermann home. The scenes are well-played, and help deepen some relationships.

Last year seemed to be an especially strong one for great movies. Many of them earned award recognition in major categories, while others just missed the Best Picture cut. Despite the nomination for Williams’ score, The Book Thief wasn’t really an end-of-the-year/awards season factor, and it didn’t make a significant splash at the box office.

The reason I’m telling you this is because this movie doesn’t deserve to get lost in the shuffle again. The Blu-ray looks and sounds fantastic, and — even though you may feel like you’ve seen it before — the film tells a simple, moving story.

The Horror at 37,000 Feet Flashpoint: The Final Season