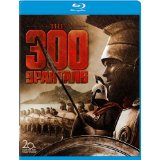 “Greece, that hard and timeless land, where even the stones speak of man’s courage, of his endurance, of his glory. And none more eloquently than this lonely pillar in a desolate pass, some 200 miles north of modern Athens. Across the hush of 24 centuries, this is the story of a turning point in history, of a blazing day when 300 Greek warriors fought here to hold with their lives their freedom and ours.”

From that introduction you might guess that this is a review of Zack Snyder’s 300 or the newly minted follow-up 300: Rise Of An Empire. That guess would be wrong. While 300 might be based on Frank Miller & Lynn Varley’s graphic novel, the inspiration for that comic was the 1962 film 300 Spartans, which was, of course based on the famous battle described in both films and the comic book.

It’s the story of the Persian invasion of Greece. Persian King Xerxes (Farrar) assembled one of the most powerful armies known to man at that time. He had his sights set on the endlessly divided country of Greece. It was 480 BC and King Themistocles (Richardson) becomes the first of Greece’s leaders to put his hand out for Greek unity. Fearing the Persian invasion he trusts the Athens fleet of warships to Athens’ greatest rival Sparta as a show of faith. Sparta’s King Leonidas (Egan) accepts the ships and pledges to add the Spartan army and unite against this common enemy. But rivalries are not easily set aside, and Sparta’s second king can’t forget the sons he lost to war against Athens. So the council refuses to send the troops in what it believes is an effort to save Sparta only.

Leonidas has a plan to stop the superior forces at a narrow mountain pass at Thermopylae. With the council’s refusal he has only his own personal guard, a mere 300 men, that he can send to the task without violating orders. With his honor on the line, he marches to the pass. But can 300 Spartans hold off an invasion of 20,000 Persians?

The film also utilizes a more fictional sub-plot. Ellas (Baker) is a relative of Leonidas, and she wishes to marry Phylon (Coe) who is the son of a suspected traitor. Denied both his permission to marry and to fight among the 300, Phylon sets out to prove his courage and his loyalty by following the march to war. Let’s call him the 301st Spartan. The subplot appears to be filler for the most part and adds no surprise to the story. We all expect he’ll do something courageous and win his honor and the respect of Leonidas, not to mention the girl. If that was a spoiler for you, then you obviously haven’t watched enough of these things.

While 300 Spartans shares the same story and inspiration with 300, the films could not be more different. 300 is a splashy graphic novel painted upon the larger canvas of the big screen. That film has none of the noble characterizations that highlight this movie. There’s nothing like unaltered actors playing out in a costume drama to create the emotional pinnacle that was the sacrifice of these 300 men. Yes, the dialog hams it up from time to time, and there is no shortage of grand gestures and more than enough exposition. Certainly, 300 Spartans is a flawed film in many ways. Still, there is an argument to be made here that it stands above the flashy modern telling. Both films have their defenders, and there’s room enough on my video shelf for them both.

Something must be said of cinematographer Geoffrey Unsworth. This film is a wonderful example of his fine eye for both detail and grand vistas. He makes wonderful use of the authentic Greek locations. His work is legendary and can be found in such classics as 2001: A Space Odyssey, A Bridge Too Far, The Great Train Robbery and even Richard Donner’s Superman. The film is worth a look just for the cinematography. He won two Oscars for his work and likely should have had more.

Unfortunately, the chosen locations might offer beautiful Greek seascapes and mountains, but the exact choices were a bit problematic. The location of the battle hardly appears to be narrow at all. Most of the battle scenes happen out in the open on the shoreline. Here’s where the computer-assisted camera work of 300 has an edge on the original film. 300 also has the advantage of reproducing people who aren’t really there. Of course, this film has a limitation when it comes to extras, and so it hardly looks like 20,000 to 300. Still the idea that the Spartans were indeed outnumbered comes across.

The battle doesn’t really begin until the last 30 minutes of the film. It comes in waves and looks typical of the sword-and-sandals movies of the time period. The action manages to get in close, and there’s plenty of good stunt work for all of the hand to hand. The fight with Xerxes’ very much mortal Immortals is quite convincing and action-packed.

It took a long time to get this film first to DVD and now to Blu-ray. Credit the new 300 film for rekindling any possible interest. Whatever the reason, this one will be an experience whether you’re a fan of the new movies or not. It’s classic ancient world battles filled with honor and blood.

300 Spartans is presented in its original aspect ratio of 2.35:1. The 1080p image is arrived at with an AVC MPEG-4 codec at an average 35-40 mbps. When you consider that there wasn’t extensive 4K restoration on the movie, the high definition image presentation does rise above the limitations of its age. The transfer is quite clean, and the colors are better than expected. Certainly much of the film appears muted and thankfully much of the original grain remains. Reds still jump off the screen with rich texture in the battle cloaks. It’s not a particularly bloody film, especially when compared to Zack Snyder’s work. But the detail here is good enough to catch the subtle wounds and blood. Black levels might be only average, but the vistas hold up remarkably well.

The DTS-HD Master Audio Mono is not going to test the limits of any system. The intent here is merely to deliver a clean sound without any real bells or whistles. It’s fine and fits the film well enough to hear dialog and the clank of swords and shields.

History had already written this script over 2000 years ago. Hollywood has a way of reinventing history, and that’s certainly true here. But I didn’t really come for a history lesson. Those facts can be better found somewhere else. It’s an enjoyable film that is finding a new audience these days, and Fox has given us the best print possible to do just that. It’s a theme that resonates even today, “a unity of free men fighting together resisting this united tide of tyranny”.

Gino Sassani is a member of the Southeastern Film Critic's Association (SEFCA). He is a film and television critic based in Tampa, Florida. He's also the Senior Editor here at Upcomingdiscs. Gino started reviewing films in the early 1990's as a segment of his local television show Focus. He's an award-winning recording artist for Omega Records. Gino is currently working on his 8th album Merchants & Mercenaries. Gino took over Upcomingdiscs Dec 1, 2008. He works out of a home theater he calls The Reel World. Favorite films: The Godfather, The Godfather Part II, The Body Snatcher (Val Lewton film with Karloff and Lugosi, not the pod people film), Unforgiven, Gladiator, The Lion King, Jaws, Son Of Frankenstein, The Good, The Bad And The Ugly, and Monsters, Inc.
Beyond Outrage (Blu-ray) The Horror at 37,000 Feet