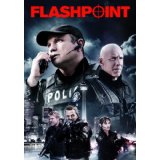 It is true what they say, every time you think you are done, you get pulled back in. I had been working on cleaning up my house and trying by any means necessary to get it on the market (42 gallon trash bags are your friend). But the big boss of Upcomingdiscs.com asked if I would like to review the final season of Flashpoint. I looked at my movie spinner and saw nestled between the Flash (the short lived TV series) and Freakazoid Season 1(okay, I’m odd, I get it), the first 5 volumes of Flashpoint. At that point, it was pretty much a done deal.

At the end of the fifth season (or fifth volume if we are being technical), we had arrived at the episode Slow Burn. In this episode, the main story was that an arsonist was at large. The arsonist proceeds to take a fire chief hostage and eventually the criminal gets caught. However, that was certainly not the end of the story as the arsonist actually had a partner working at the fire station. This doesn’t go very well as the fire chief takes the partner hostage and the SRU Unit has to negotiate a peaceful settlement.

But in the backdrop of the final episode, two very important sub-stories takes place. The first being Sgt. Gregory Parker (played by Enrico Colantoni) who is trying to decide if he wants to sign his suspension papers from the fallout earlier in the season. The second involves the couple of Sam (played by David Paetkau) and Jules (played by Amy Jo Johnson) who’s very being together is breaking the code of ethics. However, both of the stories play out in a positively light with Greg tearing up his suspension papers and then the couple being cleared of any misgiving.

We join season six where a gunman is holding a mother hostage while the daughter watched on a closed circuit television in absolute shock. With the SRU team closing in, what exactly will happen? We move eight hours back in time to see Ed (played by Hugh Dillon)showing a bunch of high school students what it is like to be an SRU officer. He explains the various psyche tests as well as the physical ones where he pushes his body to the limit.

Meanwhile, we see a nice moment between daughter, May and her mother Michelle. May then is called by her boyfriend Tobias who talk about her upcoming concert. During the call, May also gets another phone call but decides to not take it. As it turns out, the other call is from May’s father, James who no longer lives with the mother and daughter due to the fact that he was physically and emotionally abusive.

We shift to James who is living day to day. The apartment manager visits him and tells him he is evicted and needs to leave immediately. James tries to give him some of his jewelry but the manager is not taking it. After the manager leaves, James is desperate and decides to grab his gun. He takes off for the club that Tobias is working at. After an altercation and multiple shots fired, Tobias is taken hostage and they drive off in James’ car.

However, the SRU Unit is called in and track the vehicle. Eventually they end up in pursuit. Tobias, now placed in the trunk by James manages to get free and slides out. The SRU Unit Van stops in time and picks up Tobias. James does not seem to care so much but instead decides to head off to the hotel where Michelle works. Once James is there, he finds where his ex-wife works and decides to confront her. Whether he wants money or something else, he is taking hostages and the SRU Unit will be forced to make a difficult decision.

These last thirteen episodes run the gambit of interesting topics and high intensity situations. We get everything from a gunman who kidnaps a doctor so that he can help his wounded son to serial killers and then even a giant bombing incident in the finale which tests the wills and determination of every member of the SRU unit. It runs a long range of emotions too where the right choice is not always the best one.

We also see a couple of important stories play out including one with “Raf” Rousseau (played by Cle Bennett) who comes to grips with his own moral code. In addition, Ed Lane must also struggle with his own emotions after he has to make a very difficult choice. Each situation despite stemming from the same event leads to different conclusions. But the team carries on with new difficulties that seem to mount after every episode.

Again, this show performs well right until the last episode. The strong writing in this series never gives up even at the end with the final two part episode which shakes the team down to their very foundation. The characters we have grown to love stay true to themselves and the show even gets its own fitting conclusion. Sure, the series did not make the fabled one hundred episodes, but in this day and age, seventy five is enough to see it on syndication for years to come.

The video is in 1.78:1 anamorphic widescreen. Toronto is still very pretty and that means lots of great shots in each and every episode. Color is superb and I’ve really come to enjoy what next big building or skyline is going to be involved from show to show. Good presentation all around here.

The show officially ended on December 13th, 2012. After seventy five episodes, it was time to call it quits and despite it not making the magical one hundred for the ole syndication racket, I think it was still a really good show. Also, very important to fans but the show ended cleanly and with a fitting conclusion. A lot of shows, especially cancelled ones don’t usually get that luxury.

This final dvd set of thirteen episodes was well put together and even for the final go around we do actually get some decent extras (still no commentary, but at least a roundtable type interview). It took a while to get the rest of the final thirteen episode but it was worth it. This is Michael Durr, signing off on a fantastic series. It’s been a ride from episode 1 through the end, but in my reviewing career, watching this was a true highlight. Take care.

Michael Durr has been reviewing movies for the better part of fifteen years now. He primarily enjoys thrillers, sci-fi, animation and even a little courtroom drama. His favorite films include Escape from New York, the Goonies and anything with Alyssa Milano. When he’s not praising Kurt Russell as the greatest actor of our time or scratching his head over a David Lynch flick, he’s spending time at home in Texas with his lovely wife, Lori and his amazing son. How they put up with him is a mystery, but even Basil Rathbone doesn’t have the time to solve that one.
The Book Thief (Blu-ray) Jeff Dunham’s Achmed Saves America: The Animated Movie (Blu-Ray)