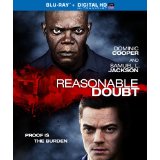 “The problem is you don’t know my pain or emptiness. But now you’re going to know how it feels to be me.”

Mitch Brockden (Cooper) is an ambitious up and comer in the Chicago prosecutor’s office. He has a reputation for being aggressive, and he doesn’t lose cases. He’s respected and liked by his colleagues. That’s the man we first meet. But after a night of some power drinking with his buds, we are introduced to another Mitch Brockden. This Mitch is selfish and a coward. When he ends up hitting a man while driving drunk, his instincts tell him to call an ambulance from a pay phone so it can’t be traced to his cell and drive away. You see, Mitch has a lot to lose. He’s up for getting a DA job. He has a wife and a brand new baby. He’s afraid the DUI accident will derail that life. Unfortunately for Mitch, it’s his decision to run away that causes the most damage.

So far things look good. There is no real damage to the car, and he appears to have completely covered his tracks. Alas, we find that Mitch still has some remnants of a conscience when he learns what happened after he left. The police stopped Clayton Davis (Jackson) in his van for a broken tail light. When they noticed blood, they discovered the body of Mitch’s hit-and-run in the van. Now Clayton is being charged with the murder of the man, and Mitch knows the truth, or at least he thinks that he does.

Clayton is in even more trouble because of the incident. The police have started to connect him with other unsolved murders. Mitch feels sorry for the man who also lost his own wife and son in a brutal home invasion. Mitch gets himself assigned to the case and attempts to throw the verdict. Of course, his sudden ineffectiveness doesn’t go unnoticed by his peers, and particularly by Detective Kanon (Reuben). She starts to investigate.

What began as a morality play turns into a cat-and-mouse thriller. Mitch discovers that there’s more going on here than he realized and that his attempt to right his own wrong might have just made matters worse. Throw in a long-lost stepbrother who wants to prove himself, and suddenly Mitch is in danger of losing more than his job. His family’s life is in jeopardy.

There’s kind of a double-back moral here. Of course, Mitch’s life would have been better had he done the right thing. And, to his credit, he tried. At first he was calling a taxi to go home until he saw a couple of thugs hanging around his SUV. That causes him to rethink leaving the vehicle in a “bad” neighborhood. But there’s certainly more than a little of the “no good deed goes unpunished” theme as well. Once again, his life might have been better if he hadn’t gone out of his way to try to correct his wrong.

Most of us know Dominic Cooper as Howard Stark in many of the Marvel Universe films. It started as more of a shadow role and has grown larger in the Captain America franchise. I have enjoyed him in that role, but his portrayal of Mitch here is rather lifeless. I suspect some of the problem goes back to the script. I can see him having a hard time finding the emotional center for the character. I also say this, because once the film breaks into its thriller mode Mitch comes alive considerably more. But in the first half of the film Cooper appears to be sleepwalking his way through the film. This is particularly true of his eyes. As Quint once said about sharks, he has lifeless eyes. It doesn’t help that his character isn’t all that interesting. In an attempt to create an “everyman” we can relate to, the film delivers a cardboard stand-in with whom we really can’t relate at all. No one is going to admit they would walk away from a dying man, so the concept of putting ourselves in this guy are slim from the jump. Mitch would have been much more interesting as a blue-collar worker fighting to make ends meet. Of course, he wouldn’t have been in a position to prosecute Clayton’s case. Perhaps if the initial stakes had been higher. I’m not sure that I believe he would have lost everything if he’d just called the cops from the start. He certainly wasn’t going to lose his family. Take a lifeless character with that many contradictions, and there likely wasn’t much Cooper could have done with the part.

Samuel L. Jackson is a completely different story. This is a far more tame character, at least in the beginning, than we’re used to seeing for Jackson. He operates almost exclusively in the distance. There’s a meekness and quiet aspect of Clayton initially that is rather unexpected for fans of the actor. Of course, the downside of Jackson’s resume is that we’re always waiting for that breakdown, the moment when the rant dominates the screen. That moment comes, sort of. It’s nothing like what you might expect, or want. But that’s a positive for this movie. I like Clayton more when he does the unexpected. I suspect that Jackson does as well.

The slow start is still clever enough to hold your interest. It’s not very predictable at this point, and there’s just enough tension played that you know the hammer’s going to fall somewhere, sometime soon. When it does, we trade predictability for some adrenaline and an eventual showdown that doesn’t really live up to the buildup. I’ll also warn you that the film ends pretty much on a downer with more than a couple of conflicting aspects to what feels like a forced coda.

Reasonable Doubt is presented in its original aspect ratio of 2.39:1. The 1080p image is arrived at with an AVC MPEG-4 codec at an almost constant 40 mbps. The high-definition image presentation is rich on detail but not so good when it comes to colors or textures. Sharp but most definitely soft is the best way to describe it. You won’t mistake this for a filmed movie. The digital nature of the photography is more than usually obvious. Black levels appear to suffer as well. They can be more than a little muddy. This hurts the climax to a considerable degree.

The DTS-HD Master Audio 5.1 is dominated by a rather annoying thumping score. This is one of those times where the sound design attempts to guide your “fright” moments, and it really doesn’t sell it. The beats work on screen as a thriller, and we really don’t need or want such an obvious manipulation to get them. It’s not a horror film, so we don’t need fake jump scenes. Fortunately the rest of the sound design is pretty well done. Dialog is perfectly placed and rich. There isn’t so much an aggressive surround mix, but there’s enough subtlety there, when it can overcome the pounding score.

Behind The Scenes With Cast And Crew: (11:52) The usual suspects offer up the usual thoughts. The sound bites cover casting, Canadian locations, characters and themes. I’m impressed that Jackson participates quite a bit here.

Deleted Scenes: (9:59) There are three here with the handy play-all option. It’s all scenes with Mitch and his stepbrother. One should have been kept in the film, as it explains a serious plot hole when the brother suddenly appears in court to lie for Mitch.

Interviews With The Actors: (35:54) You get three segments and another play-all. The actors featured are Jackson, Cooper, and Gloria Reuben, who plays Detective Kanon. You don’t hear the questions; they are edited out, and rather crudely, to say the least. These are longer forms of the same bits that appear in the behind-the-scenes feature.

In the end I found the movie to be better than most direct-to-video affairs. There are even moments that you could see this as a feature film, but director Peter Howitt is an inexperienced director who hasn’t learned to take advantage of his resources to the fullest…yet. There are flashes of a good thriller. Filmmakers need to learn that they don’t have to be everything to everybody. Sometimes you need to take what’s working and focus on doing that well. “What’s the likelihood of anyone doing that?”

Gino Sassani is a member of the Southeastern Film Critic's Association (SEFCA). He is a film and television critic based in Tampa, Florida. He's also the Senior Editor here at Upcomingdiscs. Gino started reviewing films in the early 1990's as a segment of his local television show Focus. He's an award-winning recording artist for Omega Records. Gino is currently working on his 8th album Merchants & Mercenaries. Gino took over Upcomingdiscs Dec 1, 2008. He works out of a home theater he calls The Reel World. Favorite films: The Godfather, The Godfather Part II, The Body Snatcher (Val Lewton film with Karloff and Lugosi, not the pod people film), Unforgiven, Gladiator, The Lion King, Jaws, Son Of Frankenstein, The Good, The Bad And The Ugly, and Monsters, Inc.
Muppets Most Wanted Divergent