Posted in: Disc Reviews by Brent Lorentson on April 2nd, 2014 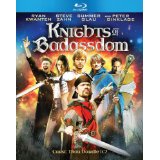 “…I’m packing an ounce of killer shrooms, and there be monsters in need of pummelin’.”

When I first think of how to explain Knights of Badassdom, what comes to mind is that it’s Evil Dead 2 meets LARPing.  The only experience I’ve had with LARPing came in the form of watching Role Models and having to review the documentary Skull World.  What director Joe Lynch (Wrong Turn 2 and actor in Holliston) has done is create a world that invites both fans of role-playing and horror and thrusts them together to create a blood-and-gore-soaked romp filled with laughs and the beautiful fan boy favorite Summer Glau (Firefly and Terminator: The Sarah Conner Chronicles).

When we first meet Joe (Ryan Kwanten of True Blood) he seems to be enjoying his life as a mechanic and a struggling Death Doom Metal guitarist.  Unfortunately his girlfriend Beth has bigger plans for herself, and she dumps him.  To pick Joe up out of his gloom, his friends and roommates Eric (Steve Zahn) and Hung (Peter Dinklage) get Joe drunk and high to the point of passing out.  By the time Joe comes to, he is already in the kingdom of  Eliphaz (the parking lot) and he is dressed in full LARP gear.

For those unfamiliar with this LARP word I’m throwing around, well, it’s simple: Live Action Role Play.  Basically where a bunch of people run around in medieval outfits carrying foam swords and shields pretending to kill one another for the sake of their make-believe kingdoms.

Eric is working his way up through the magical wizard ranks and performs a spell from a book he found; it just so happens to be a book written in the 16th century meant to conjure angels, but instead demons are called upon.  During this spell a succubus is called forth and takes the shape of Joe’s ex.

What works so well is the script; every character is given their moment to shine, and the actors embody these roles in a way where it’s just about impossible to not want to root for these guys to take on the demon.  But I’m torn between Peter Dinklage and Summer Glau on who I enjoyed watching most here; these two seem to just be having a blast with their characters.  Whether it’s Hung doing battle while under the influence of shrooms or simply Gwen (Glau) battling it out with LARP’ers or monsters, her charm shines through.

It took a while for this film to find its way to DVD and Blu-ray, and right now some may pass by this title and shrug their shoulders at it.  But this is a title you want to watch.  This is the film that will get a cult following, and then with time I wouldn’t be surprised if this became a thing of super-cult status like Shaun of the Dead.  This is a film that has everything going for it. It delivers with lines I can see people quoting with friends, and it’s a solid horror film that is actually original and fun.

In a bonus feature Joe Lynch discusses how the film works as an origin story for the characters.  Now, he doesn’t say that he plans on doing a sequel with these characters, but if he does I would be down for seeing a return to the fields of Evermore.

Knights of Badassdom is presented in the aspect ratio 2.40:1.  The 1080p image is arrived at with an AVC MPEG-4 codec at an average of 19 mbps.  The HD image is a bit underwhelming during the night sequences; a few times I noticed some banding issues as well as too much grain in shots where the moon was present.  When it comes to skin tones everything looks as it should.  With the daytime shots everything looks sharp and clear.  The blood does look a little muddy at times; overall this looks decent but a far cry from perfect.

The DTS-HD Master Audio 5.1 track is pretty solid here.  The dialog is all clear, and the monster and gore effects are immersive.  This isn’t a track geared towards building tension but instead emphasizing the horrific moments, so the bass and music cues do their job and make the action scenes hit home.  The score at times can be a bit much, but it doesn’t distract too much from the action at hand.

We get a few snip-it interviews with the cast that come to about six minutes.  There is nothing too revealing here; mostly it’s the actors making a simple plug for the film.

Knights of Badassdom panel at SDCC: (48:34) Here is the juicy bonus feature where we get the panel from the San Diego Comic Con with the cast and director discussing the film and taking questions from the audience.

This is one of those films where when I have friends over for movie nights it will find its way into the rotation, because I really just enjoy this film and want to see it with a group of likeminded individuals.  Is this a film that will go down as a great horror masterpiece? No, but it’s still a blast.  I may not be joining a LARP any time soon, but if they were more like this film, well, I’d be curious about signing up.  And let this film be a lesson about the consequences of taking hallucinogens when people read chants from ancient mystical books.

Brent Lorentson is a horror writer and film critic based out of Tampa, Florida. With a BA in Digital Film, he co-wrote and co-directed Scavenger Hunt. His short stories have appeared in various horror anthologies. In 2019 his short script Fertile Blood will be a part of the anthology horror film Slumber Party. He is currently working on his first novel A Dark and Secret Place set to be released in late 2019. Favorite Films: Taxi Driver, Fight Club, I Saw the Devil, The Wild Bunch, Dawn of the Dead, A Clockwork Orange, Pulp Fiction, Heathers, The Monster Squad, and High Fidelity.
At Middleton (Blu-ray) Norma Rae (Blu-ray)