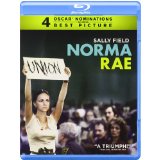 Chances are you’ve at least heard of Norma Rae, even if you haven’t actually seen the Oscar-winning film that bears her name. You might know it as the granddaddymomma of underdog stories centered on feisty female crusaders; Norma Rae begat Silkwood, Erin Brockovich, North Country and others. Or you might know it as the movie that made Sally Field a serious movie star, although it’d be another five years until she really believed that people liked her. But if you’ve neither seen nor heard of Norma Rae, now’s as good a chance as any to get acquainted: Fox is celebrating its 35th anniversary by debuting the film on Blu-ray.

Field stars as Norma Rae, a firecracker of a woman in her early 30’s who has two young kids (courtesy of two different men) and lives in her parents’ house. Norma Rae — along with both her parents and practically everyone else in her small Southern town — works at the O.P. Henley Textile Mill under harsh, unforgiving conditions. Enter Reuben Warshowsky (Ron Leibman), a Jewish union organizer from New York City. (He might as well have arrived from Pluto.) Reuben’s mission is to convince the workers at the mill to form a labor union.

Most of the workers agree with Norma Rae’s dad (Pat Hingle), who believes words like “unionizer”, “communist”, “Jew”, and “crook” are all interchangeable. On the other hand, Reuben’s message strikes a chord with Norma Rae, who feels increasingly frustrated and trapped by her dangerous and demanding job. (At least the pay is terrible…oh wait.) As Norma Rae becomes more involved with the unionization effort, she risks alienating her guileless husband Sonny (Beau Bridges), employers, and co-workers who are hesitant to rock the boat.

Although the name “Norma Rae” has become synonymous with righteous rebellion, the film is largely based on the exploits of a woman named Crystal Lee Sutton, a textile worker-turned-union organizer in the early ‘70s.

Director Martin Ritt had already made two underdog tales earlier in the decade (1970’s The Great White Hope and 1972’s Sounder), so it’s no surprise that he was drawn to this material. It’s equally unsurprising that the people who represent the textile mill’s management are presented as complete monsters. I’m not saying anyone watching the film needs to feel sorry for O.P. Henley, which is clearly meant to stand in for any big bad corporate giant. I just think a more even-handed approach to the issue would’ve made the story more compelling. At the very least, the Oscar-nominated script by Irving Ravetch and Harriet Frank Jr. could’ve explored why a reasonable person might be opposed to unionizing. Instead, we get a scene where cold-hearted management is directly responsible for the death of a mill worker.

Otherwise, I was really impressed with the sense of realism Ritt brought to the film. And I’m not just talking about the gritty, ahead-of-its time, docu-style cinematography by John A. Alonzo. The film skillfully establishes Norma Rae’s hometown as the sort of place where people are deeply set in their ways. (It’s so much easier to go out and get drunk rather than rise up and affect change.) The director and his writers accomplish this despite not really giving significant screen time to anyone other than Field, Leibman, Bridges or Hingle. Norma Rae also connects the dots between unionization and the Civil Rights movement — the fight for fair treatment naturally appeals to the mill’s black workers — but it doesn’t allow that particular thread to overwhelm the story.

That’s because this film really was a star vehicle for Sally Field, and the actress knocked it out of the park. (And picked up the first of two Best Actress Oscars in the process.) The former TV star (Gidget, The Flying Nun) always possessed a plucky charm. But in Norma Rae, Field adds a forceful, sexy charisma that makes her believable as someone that other people would want to follow. I also believed her chemistry with Leibman. The actor is equally good playing the “charming” and “passionate rabble-rouser” sides of Reuben.

Field’s Southern accent might seem too broad at times. But I think her undeniably big voice is a conscious choice to illustrate that Norma Rae is someone who demands to be heard. (Even if what she’s saying is irritating to her co-workers…or the movie’s audience.) Ironically, two of the film’s most powerful scenes — the famous sequence where Norma Rae silently holds up a piece of cardboard with the word “UNION” written on it, and the calm, clear-eyed chat where she explains her actions to her kids — are also two of its quietest moments.

In a movie with a lot of noise — the oppressively loud machinery in the mill; Norma Rae’s voice — it’s a sly reminder that actions speak louder than anything else.

Norma Rae is presented in its original aspect ratio of 2.40:1. The 1080p image is arrived at with an AVC MPEG-4 codec at an average of 36 mbps. Over the years, Fox has updated many of its older titles for the HD era, and I’ve had the pleasure of reviewing more than a handful of those discs. The results have been largely satisfying and have mostly focused on grand, glossy, epics. In terms of scope, Norma Rae is pretty much the opposite of that.

The relatively low-budget production boasts a drab palette and persistent grain, both of which are appropriate considering the material. There are a few exceptions — including a scene where Reuben speaks to an assembled crowd at a church — where the image looks strikingly clear. Still, there’s a consistent amount of texture throughout. Skin tones are warm and occasionally stray into orange-y territory because of the suntans on display. Black levels, unfortunately, leave a lot to be desired when it comes to separation and shadow detail. Again, I suspect that has more to do with the low-budget nature of the production, which is reproduced quite faithfully on this disc.

The DTS-HD Master Audio 1.0 track does decent work despite its mono limitations. The track’s best feature is how well-balanced it is. The scenes at the mill feature the constant rumble of machinery, and the dialogue walks the tightrope of being intelligible to the audience and realistically hard to hear for the characters. Meanwhile, some of the other spoken dialogue sounds a bit hollow and tinny. On the other hand, the Oscar-winning song “It Goes Like It Goes” (sung by Jennifer Warnes) sounds practically as good as new. Overall, the mono track obviously means your surround system can take a mini-vacation for the film’s 114 minute running time. (It’s hard not to imagine how much more immersive and overwhelming the mill scenes would’ve been with a surround track.) Also, I happened to flip on the subtitles and noticed that they frequently skipped over what the characters on screen were actually saying. Weird.

Hollywood Backstory: Norma Rae: (25:13) The bad news is the only substantial Special Feature on this disc has been ported over from the film’s 2001 DVD release. It’s an episode of AMC’s Backstory.

The good news is the story behind Norma Rae is pretty interesting. The film is painted as the project no studio wanted to make (because of its unglamorous subject matter) featuring a role that no A-list actress wanted to take. Director Martin Ritt (who died in 1990) gets a lot of love here, and we also get comments from Field and Leibman. We also learn that when Field won her Best Actress Oscar, she beat out some of the actresses (Jane Fonda, Jill Clayburgh) who had passed on the role of Norma Rae.

In 1979, Norma Rae became a hit and earned a Best Picture nomination. Today, a movie like Cesar Chavez — another biographical film centered on a labor movement in the U.S. — can barely get a theatrical release.

These sorts of modestly-budgeted dramas have been increasingly crowded out of multiplexes, so it’s good to see a movie like Norma Rae get a high definition home video release. The film looks better than ever, but I still wouldn’t call it a dazzler. (Except for Field, who I may or may not have been crushing on during this flick.) The lack of any new bonus material, however, is unequivocally disappointing.

If you’ve never seen Norma Rae, this disc is absolutely the way to go. If you already own the DVD, you can walk (but don’t run) to grab the Blu-ray.