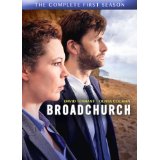 The majority of murders committed on television are presented from the perspective of the people trying to solve them. It’s a smart, gratifying strategy because it allows us viewers to play detective from the safety of our couches one hour at a time. Far fewer shows are interested in doing the more difficult/less glamorous work of dramatizing the way a death can shatter a family, along with an entire community. Broadchurch is one of the most outstanding cop dramas I’ve seen in a long time because it’s willing to do that difficult work while also delivering the goods as a satisfying whodunnit.

“You know what happens around a murder? A whole industry grows up, of groupies and rubberneckers, and people who want to touch the case.”

The series opens with a nighttime shot of a young boy standing precariously close to a cliff that overlooks a beach. He is also bleeding from his hand. The next morning, the body of 11-year-old Danny Latimer (Oskar McNamara) is discovered on the beach. Danny’s death rocks the quiet seaside town of Broadchurch, which is known for its low crime rate. Obviously, the people hit the hardest are Danny’s immediate family, which includes his mother Beth (Jodie Whittaker), his father Mark (Andrew Buchan) and his older sister Chloe (Charlotte Beaumont).

The case is picked up by Alec Hardy (David Tennant), who has arrived from the city to take over as Broadchurch’s new Detective Inspector. He works the case with Detective Sergeant Ellie Miller (Olivia Colman), who was expecting to get the promotion given to Hardy. As they search for the killer, the brusque, miserable Hardy forces Miller to look at her friends and neighbors more keenly and objectively while trying to figure out which one of them is capable of murder.

At first glance, this British import strongly resembles AMC’s The Killing, another serialized drama that examined the extended impact of a young person’s murder. The biggest difference between the two shows — besides the fact that Broadchurch wraps up the Latimer mystery in eight tidy episodes, while The Killing inexplicably stretched the Rosie Larsen case over 26 episodes — can be found in their titles. For all its far-reaching ambitions, The Killing really did handcuff itself to the question of “Who killed Rosie Larsen?” for far too long. Broadchurch doesn’t just excel because it’s more concerned with “why” than “who”, but because it also seeks to answer the question, “What happens next?”

Watching this show, it quickly becomes apparent that writer/creator Chris Chibnall actually put a lot of thought into how a small town like Broadchurch might realistically react to such a tragedy. For example, the local newspaper — namely ambitious reporter Olly Stevens (Jonathan Bailey) — would jump on the story first before a bigger media outlet — seasoned crime reporter Karen White (Vicky McClure) — brought national attention to the case. (Instead of merely painting the media as evil, Broadchurch shows us how the police, media, and even the Latimers manipulate each other in an effort to get results.) Some citizens might also turn to the local church, which means Rev. Paul Coates (Arthur Darvill) is busier than ever. And naturally, being known as a “Murder Town” and having the beach declared a crime scene is bad for tourism, so hotel owner Becca Fisher (Simone McAullay) starts to feel the financial squeeze. Heck, Chibnall even accounts for local crackpots, like Steve Connelly (Will Mellor) who claims to have acquired information on the case through his psychic powers.

There’s a very effective sequence early on in the first episode that breezily introduces us to a lot of the town folk as Mark walks to work. (One of the many bits that will be juicier on repeated viewings of the show.) Director James Strong helmed the pilot — along with four other episodes — and the series has a look that is alternately gritty and grimly beautiful.

The rest of Broadchurch‘s eight-episode run expertly shows us how the characters’ lives are intertwined with one another. (The camera feels like it’s constantly peeking over people’s shoulders or looking into their houses through windows.) Broadchurch gives us the expected dose of scandal — infidelity, surprise pregnancy, drugs — we’ve come to expect from twisty TV murder cases. But the crux of the drama comes from showing us just how tenuous the connection we have with our neighbors (and with our own family) can be.

Even with a relatively brief eight-episode run, Broadchurch still has to give us some red herrings. (I’m pretty sure it’s not a spoiler to say the suspect who is arrested in episode 3 doesn’t wind up being the killer.) However, each episode feels essential because it always seems like we’re learning something about the tapestry of the town. So even though we know we’re being faked out with a phony killer, it doesn’t feel like the show is wasting our time.

Tennant (forever beloved as the Tenth Doctor) leads the ensemble, but he’s not asked to carry the show. The actor is fantastic as the driven, cranky Hardy, who looks like he’s carrying the weight of the world on his slim shoulders. He’s also sourly funny. Hardy wound up in Broadchurch after a previous murder case proved to be literally heartbreaking. (Hardy’s health issue is a bit on-the-nose, but it does add a sense of urgency to the case.) Colman radiates empathy as Miller, who is frankly in over her head. (Miller has never worked a murder case before.) She’s also a warm counterpoint to the chillier Hardy, but watching Colman become more hardened as Miller begins to see what the people of Broadchurch are capable of is one of the show’s more compelling arcs.

The rest of the cast is littered with terrific supporting performances. Whittaker and Buchan are both devastatingly good as Danny’s grieving, increasingly desperate parents. (Whittaker, in particular, captures the complicated mixture of frustration, isolation, and strength of Beth.) Pauline Quirke is legitimately unsettling as Susan Wright, a person-of-interest who was hanging around the crime scene and has no problems lying to the police. I also enjoyed David Bradley’s crusty performance as Jack Marshall, the shop owner with a shameful past who employed Danny as a paper boy.

For me, the conclusion of the case was both surprising and satisfying. Pulling off both of those qualities is tougher than you think since some “surprise” endings only catch audiences off guard because they don’t make a lick of sense. Broadchurch, on the other hand, has very clear story threads running through the entire season, whether it’s family members turning a blind eye to horrors going on in their own homes, or how lonely people just need a hug. And where other shows might give us piecemeal glimpses of their central mystery, Broadchurch presents the murder (and subsequent cover-up) in its entirety during the last episode.

Broadchurch: The Complete First Season features all eight episodes on three discs. Special features (all on Disc 3) include a charming, informative behind-the-scenes featurette that’s really more of a production diary, and nearly 27 minutes worth of deleted scenes.

As you may have noticed in the previous paragraph, this is only the “first” season of Broadchurch. A second series has been confirmed and will debut on British television at an indeterminate date. Meanwhile, Fox has greenlit an American remake called Gracepoint, which is set to debut sometime during the 2014-15 broadcast season. Before you start to groan, the 10-episode remake will reunite Tennant, Chibnall and Strong. Tennant will be playing a cop with a different name, but it appears he’ll be working the same case. I’m wondering if the killer reveal will be the same in the American version, and I’m curious as to which cast members from season 1 of Broadchurch will return for the show’s second go-around.

I guess what I’m really saying is that I need you to watch Broadchurch so that we can break down these important questions together; if you like cop dramas, I have a feeling you’ll love this one.