Posted in: Disc Reviews by Gino Sassani on April 8th, 2014 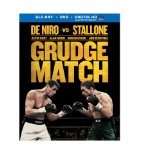 You know exactly what’s going on here. It’s Rocky Balboa vs. Jake La Motta, and they’re not exactly in their prime. For reasons of property rights, of course, this really isn’t Rocky or La Motta, but you and I know it is. The film takes great pains to remind us of each of these iconic characters. Sly’s character tries to take a shot at some hanging meat after drinking a glass of raw eggs. De Niro’s character is found telling boxing jokes in his own club, just as the real-life La Motta did after his fighting days were over. Both of these actors played iconic fighters in their day. It’s safe to say that both the characters and the actors themselves are beyond their physical prime. Sly is just three years shy of 70, while De Niro reached that milestone back in August. And that’s what makes Grudge Match a better film as a comedy.

It’s been 30 years since Pittsburg’s greatest fighters Henry “Razor” Sharp (Stallone) and Billy “The Kid” McDonnen (De Niro) left the fight game. They faced each other twice in their careers, splitting the victories. For each, the other was their only loss. A rubber match was going to happen, but Rocky Razor decided to retire before the fight. Since then, La Motta The Kid has not been able to let it go. He wanted to show the world he was best. It doesn’t help that they had an issue out of the ring.

Enter Sally, played by Kim Basinger. She was Razor’s girl but ended up sleeping with The Kid and having his son. She never stayed with either one, but it’s been the real “grudge” between them ever since. Now The Kid’s son B.J. (Bernthal) wants to connect with his father for the first time. He has a son of his own and seeks out The Kid.

Meanwhile a shifty promoter Dante (Hart) is looking for a chance to hit a big score. He finally has it when a cell phone video of the two fighters getting into a tussle goes viral online. Suddenly there is interest in a rematch, and he’s going to have to bring these two rivals together to pull it off. Alan Arkin is another noteworthy performer here. He plays Razor’s old trainer and father figure. It’s safe to say he’s not far off the mark of the Burgess Meredith character from the Rocky films. Arkin provided the kind of heart that does work in this film. There really wasn’t any need to look any farther down the road.

You really can’t take any of this too seriously. The problem is that I think the cast are the only ones associated with Grudge Match that appear to get that. Screenwriters Tom Kelleher and Rodney Rothman don’t really understand that this is all for laughs. That results in the film’s attempt at suspense. Is the fight on or off? Let me assure you that I’m not dropping any major spoilers by telling you it happens. I’m not even sure why they wasted any time trying to make that outcome appear to be in danger. If you don’t have a fight, you don’t have a movie, comedy or no. There is also a little too much energy expended on the pair’s relationship with Basinger’s character. Unfortunately, she’s really a throwaway character here who only slows down the pace whenever she’s on the screen. There’s absolutely no chemistry to be found between her and Stallone or De Niro, and what’s worse, there’s nothing even remotely funny here.

The film’s laughs come strictly from the interaction between Sly and De Niro. They have far more chemistry than I would have thought possible. They play these parts as if they were born to play them, and of course, they kind of were. They both understand that they’re poking fun at themselves along the way, and it’s the only thing in this film that works. Kevin Hart is the only other actor here who seems to get it. He’s off doing those manic things that Kevin Hart does, and it serves as a better anchor between these characters than Basinger could ever hope to offer. There are some emotional moments to be found in son B.J., but the result of that character is that I don’t think I’m ever going to eat butterscotch jelly beans again. Come to think of it, I didn’t before the film anyway.

Director Peter Segal commits the unforgivable sin of not being able to commit himself. He can’t decide if he’s making a comedy or some kind of a drama. Get a clue, Peter. Two fighters pushing 70 getting into the ring ranks seriously up there in the theatre of the absurd. It would have been best to go with it and not look back. Perhaps it’s the idea of this being a Christmas movie that makes Segal believe he has an obligation to confuse the laughs with some emotional connection. Good idea, but he never pulls it off. Again, it’s all in the two main characters bouncing off each other. Everything else is remarkably forgettable.

The film is set in Pittsburg where Segal does use the locations to good purpose. The city defines each of these two in their respective post-fight lives and their “class” if you will. Sly continues his play on Rocky by making Razor the working-class-hero kind of guy Balboa was. He leaves the fight game to spend 30 years working in a plant. He has a middle class house in the heart of middle-class Pittsburg. The Kid, on the other hand, has parlayed his career into a continued, albeit rather minor, celebrity. He owns a club and a few other businesses. Thus we have two very different motivations for these 70-year-old fighters to want the fight to happen. The Kid doesn’t need the money, but he’s been bitter for 30 years that Razor retired rather than face him in the ring again. Razor desperately needs the money but has put the fighting behind him, and of course holds that grudge about Basinger. The locations are used wonderfully to define these important character elements.

For me, however, the biggest mistake that Segal makes is that he takes away any real suspense about the fight’s ultimate victor. He telegraphs that final scene like a bad fighter telegraphs his punch. He gives us an emotional favorite throughout. It’s not very subtle. We know who Segal is cheering for, and he mars the film ultimately by beating us over the head with his choice. I won’t tell you here who wins or by what kind of margin. Suffice it to say that you’ll have it figured out long before the final bell.

Grudge Match is presented in its original aspect ratio of 1.85:1. The 1080p image is arrived at with an AVC MPEG-4 codec at an average 25-30 mbps. There’s a lot of stylish stuff happening with this high-definition image presentation. You get footage that is intended to look vintage of the two fighters. Here there’s some deaging f/x work going on with the actors’ faces as well as making the entire segments look 30 years old. The present-day footage is razor-sharp and very natural in appearance. The fight sequences were done with HBO’s actual fight crew, which helps to make it look quite authentic. Black levels run deep in the few instances where they are needed. There’s not a ton of texture in the film. Close-ups provide nice detail, particularly during the fight where you’ll get the added realism of sweat, blood and tears.

The DTS-HD Master Audio 5.1 is very much like what I’ve grown used to on television broadcasts. There’s not a lot of surround use here, but they throw in enough ear candy from time to time to keep you in the action. I would have liked a more immersive experience during the fights. Still, this is mostly to capture the dialog, and the audio presentation does that well enough to drive the experience.

The Bull & The Stallion: (14:17) This behind-the-scenes feature focuses on Stallone and De Niro and their characters. Much of the footage deals with the fight rehearsals and filming the fight sequences.

In The Ring With Kevin Hart: (5:00) Here the focus shifts to the antics and comedy that Hart brings to the film.

Ringside With Tyson & Holyfield: (3:16) A mockumentary with the two real fighters talking about the reel ones.

Blow By Blow With Larry Holmes: (3:34) The retired fighter stops by the set and offers some comments on his classic fight with Ali.

Alternative Opening: (6:45) Peter Segal offers an introduction and then commentary. Most of it is the same. Hart’s Dante character offers some narration of the earlier fight footage. Segal points out where the de-aging effects were not completed in footage that did not make the final cut.

Deleted Scenes: (6:44) There are six with handy play-all option. Segal introduces each one with some info on the scene.

In the end you have a movie that entertains when it is funny but drags when it tries to be serious. Even then the actors are spoofing themselves as well as characters they’ve played before. That means throughout the entire picture you’ll be asking yourself, “Haven’t we had this conversation before?”

Gino Sassani is a member of the Southeastern Film Critic's Association (SEFCA). He is a film and television critic based in Tampa, Florida. He's also the Senior Editor here at Upcomingdiscs. Gino started reviewing films in the early 1990's as a segment of his local television show Focus. He's an award-winning recording artist for Omega Records. Gino is currently working on his 8th album Merchants & Mercenaries. Gino took over Upcomingdiscs Dec 1, 2008. He works out of a home theater he calls The Reel World. Favorite films: The Godfather, The Godfather Part II, The Body Snatcher (Val Lewton film with Karloff and Lugosi, not the pod people film), Unforgiven, Gladiator, The Lion King, Jaws, Son Of Frankenstein, The Good, The Bad And The Ugly, and Monsters, Inc.
Broadchurch: The Complete First Season Hazmat