War of the Worlds-Goliath (Blu-Ray 3D)

Posted in: Disc Reviews by Brent Lorentson on April 4th, 2014 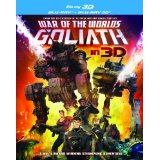 The H.G. Wells invasion story has been told numerous times from a radio show when it allegedly caused a panic when Orson Wells made his infamous broadcast to the more recent imaging brought to the screen by Steven Spielberg.  It’s the alien invasion story that has captured our imagination and will continue doing so for decades to come.  In the new 3D animated release of War of the Worlds: Goliath, the tale of science fiction is simply the jumping-off point to a new and bigger story about the war that was waged between man and those from outer space.

It begins in Leeds during the original invasion in 1889.  Eric Wells is only a child at this point and witnesses the murder of his parents by the giant alien machines that have invaded our planet.  The guilt of their death continues to weigh heavily on him as he arrives in New York; now he is an adult and a Captain in the military (Peter Wingfield handles the voicing for Eric).  Though there is fear of the impending world war, there has been a recent discovery that the aliens could possibly be planning another attack.  Thankfully, though, Tesla and other scientists have been able to use the alien technology from the previous attack to develop battle-tripods they call Goliaths.

The world is very steampunk and reminds me of a cleaner version of the world created first in Blade Runner.  The animation of the cityscapes and zeppelins as well as the Goliaths all look great and help make this a very believable world our characters inhabit.  The only issue I’d have concerning the animation involves the physique of every character; their wide hulking shoulders make them out to be walking gods whose clothing seems to fit all too snugly and should tear at the first sudden movement.  But so are the rules of animation that every character, male or female, should resemble perfection.

Joining Eric are several of the world’s greatest military soldiers to train in the Goliaths and prepare for any possible attack.  But it’s during the training exercise the alien Tripods make their first move and attack.  The battles are fun and intense, as a blast from one of the aliens will incinerate a body instantly.  And though this may simply be a cartoon, this isn’t your standard kids’ fare, as the body toll racks up as the new invasion spreads.

It’s when the aliens stage their attack on New York that the devastation these alien crafts are capable of hits home for all those involved, and panic sinks in as the attack can easily go global.

Though there is a talented voice cast with Adrian Paul (The Highlander series) and Adam Baldwin (Firefly and Chuck), I feel for the most part everyone is wasted.  We get a little bit of tension between characters as they squabble over their feuding countries, but it’s all made to be trivial in the grand scheme of things considering aliens are attacking.  The only character development comes with Eric confronting his guilt involving his parents’ death, but this is wrapped up so easily that it’s as though it never should have bothered him to begin with.

Really all we have here is an animated exercise in machines duking it out using the planet as their ring to exchange blows.  The battles are great to watch, and it’s fun seeing all the destruction and mayhem caused by both sides, but when it comes to the human story, there is nothing here.

War of the Worlds: Goliath is presented in the aspect ratio 1.78:1.  The  1080p 3D image is arrived at with an MVC codec at and average 19/14 mbps. The 3D is actually pretty impressive for a flat cel creation. There’s plenty of depth that doesn’t really stoop to gimmicky uses. There are some fine scenes with snow/debris in the air that’s become a popular and effective way to showcase 3D images. A lot happens in the sky with a mix of period and modern-looking craft. Here’s where the depth really pays off the most.

The 1080p image is arrived at with an AVC MPEG-4 codec at an average of 24 mbps.  For an animation film, this looks nice and sharp.  The detail from the background cels to the planes diving in and out of frame to the lasers blasting onto the screen, everything looks sharp and the colors all pop (especially the lasers).  The designs of the Goliaths look great, and we can see all the detail that went into these creations, though you can tell there is some separation with them due to the 3D conversion.

The DTS-HD Master Audio 5.1 track is a good one.  The first thing I’d like to mention is the score.  For a film that isn’t being released by a major studio this boasts a score that is as epic as any summer blockbuster. And when you see in the making-of how it is composed by one man in front of a small screen, my appreciation only grew.  The foley work is also well done, but at the same time it lacks some during the scenes in the city; where it should have come alive it fell a little flat. The 3D version appears to have much stronger subs and a greater dynamic range.

Stories of the War St. Petersburg (3:38) This is the first of two deleted sequences that we get.  It’s only displayed in storyboard form, but we still get a good idea about General Kushnirovs story before the events of the film.

The Oath (8:41) This series of storyboards follows a young soldier in New Mexico and the events that led up to the second invasion.  Though it’s clear why this wasn’t brought to completion, it’s a solid bonus feature worth giving a look.

The Movie in Story Boards:  Here is a shocker; it is the movie but in story boards.  The film plays normally, but in the upper right hand corner you can see the storyboards.

Meet Our Voice Actors:  Here you can click the option and see the character as well as a brief bio on the actor performing the speaking part.

The Art of War: Designs for the machines we see throughout the film.

The Lovers: (2:10) Here we get to see the video of the characters Eric and Jennifer performed by the actors as they play out their intimate scene together.

The Making of War of the Worlds: Goliath: (24:08) The highlight of the bonus features as we get a look behind all the work that went into getting this film made.  We get plenty of back story about how the financing came together, but the bits I enjoyed most involved seeing the foley work in action as well as seeing the composer Luka Kuncevic work his magic.

Though I’m a fan of the look of the film and the action sequences were a blast, the story still falls short.  The performances by the voice cast are fine, but there simply isn’t enough character development anywhere here to get me to root or care for these characters.  But then again the teenage audience this is geared towards I don’t believe will mind much, so long as the 3D carnage keeps their eyeballs occupied.

Brent Lorentson is a horror writer and film critic based out of Tampa, Florida. With a BA in Digital Film, he co-wrote and co-directed Scavenger Hunt. His short stories have appeared in various horror anthologies. In 2019 his short script Fertile Blood will be a part of the anthology horror film Slumber Party. He is currently working on his first novel A Dark and Secret Place set to be released in late 2019. Favorite Films: Taxi Driver, Fight Club, I Saw the Devil, The Wild Bunch, Dawn of the Dead, A Clockwork Orange, Pulp Fiction, Heathers, The Monster Squad, and High Fidelity.
Captain America: Winter Soldier Broadchurch: The Complete First Season