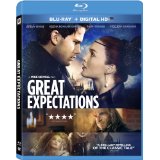 There’s a reason “Great Expectations” continues to be adapted for the stage and screen more than 150 years after its publication. Charles Dickens wrote — and set — his novel during Britain’s Victorian era, but the classic coming-of-age story is thick with ideas about social status and all-consuming ambition that easily transcend its original time and place. So how does this new version, first released in the U.K. in 2012, stack up?

There have been seven previous feature film adaptations of “Great Expectations.” The oldest is a 1917 silent film, but the most acclaimed is legendary filmmaker David Lean’s 1946 adaptation starring, among others, John Mills, Alec Guinness and Jean Simmons. The most recent big screen version, directed by Alfonso Cuaron (Gravity), was a contemporary adaptation starring Ethan Hawke, Gwyneth Paltrow, Robert DeNiro and Anne Bancroft. This 2012 version, courtesy of Mike Newell (Harry Potter and the Goblet of Fire, Four Weddings and a Funeral), coincided with Dickens’ 200th birthday.

There’s a decent chance you read “Great Expectations” in high school but here’s a quick summary anyway. Pip (played as a boy by Toby Irvine) is an orphan living with his wretched, older adult sister (Sally Hawkins) and her kind-hearted blacksmith husband Joe Gargery (Jason Flemying). One Christmas Eve, Pip gets a startling visit from an escaped convict (Ralph Fiennes) who asks for food and a file to rid himself of his shackles. After the convict is recaptured, Pip begins spending his days at Satis House, the dilapidated home of unhinged, wealthy spinster Miss Havisham (Helena Bonham Carter). Miss Havisham has arranged for Pip to come over periodically so he can serve as a playmate for her adopted daughter Estella (Helena Barlow). Young Pip falls in love with Estella, despite the fact that Miss Havisham has conditioned the girl to wreak revenge on men.

Flash forward a few years and Pip (now played by Jeremy Irvine, Toby’s older brother) is working as a blacksmith’s apprentice in Joe’s shop. Pip, however, is unhappy with his modest life; he wants to be a gentleman so he can marry Estella. One day, an imposing lawyer named Mr. Jaggers (Robbie Coltrane) arrives with life-changing news: Pip is set to receive an enormous sum of money from an anonymous benefactor if he agrees to move to London immediately and become a gentleman. Pip also can’t inquire about the identity of his benefactor. Once Pip arrives in London — and crosses path with Estella (Holliday Grainger) again — he finds that being a “gentleman” isn’t quite what it’s cracked up to be.

Despite being one of Dickens’ most concise works — “Great Expectations” was originally published in serial form in a weekly periodical, which helped prevent the story from sprawling out of control — the novel has a multitude of rich supporting players and subplots that are almost impossible to properly serve with a single feature-length film. (Not surprisingly, there have also been multiple TV miniseries adaptations of “Great Expectations.”) The simplest solution would be to focus on the aspects of Pip that paint him as a romantic hero who will do whatever it takes to win Estella’s heart.

Newell, working from a script by David Nicholls, seems content to split the difference. The result is a handsome-looking period piece. Newell — along with cinematographer John Mathieson — pulls off a neat little trick: the dingy-looking marshes from Pip’s original home in Kent wind up looking like a splendid oasis after his ordeal in London. Unfortunately, this is also a handsome period piece that bounces from one subplot to another, but lacks a strong center to hold the story together.

Irvine (War Horse, The Railway Man) has the look of a strapping young lead, but often finds himself in a bind. He’s either sharing the screen with more experienced actors like Fiennes (sometimes looking like he stepped out of a nightmare; other times like Riff Raff), Coltrane (cheerily slimy), or Bonham Carter…and those are just the actors who also appeared in Harry Potter movies! Bonham Carter, in particular, seems totally at home with Miss Havisham’s pale visage and tattered wedding dress. That being said, the actress plays the character’s craziness as if it were the most reasonable thing in the world; she’s “under-the-top.”

When Irvine isn’t being upstaged by his more dynamic co-stars, he’s failing to generate much heat with Grainger. Part of it is their relative lack of shared screen time, but another part is Irvine’s pouty performance. Grainger, on the other hand, nails Estella’s suppressed desires; the icy surface is there, but the actress lets us see Estella struggling against the way she was programmed by Miss Havisham.

Unfortunately, the film ultimately feels rushed, especially when we get to a final act that reveals some complicated links between the major characters in Pip’s life. There are also elements of a courtroom drama and a daring escape attempt. Great Expectations, however, is at its best when it’s ruminating on Dickensian themes concerning class; namely, whether class is earned or simply inherited. This film is faithful to the period and dutiful in its mission to hit as many story beats as possible. (Although a few plot points from the novel are still inevitably left out.)

Truth be told, you wouldn’t want to mess with Dickens’ story too much. The flip side of that faithfulness is that this new adaptation doesn’t really offer much that’s exciting or surprising to the table. (Beyond strong performances from some reliable pros.) In other words, this film seems content to meet expectations rather than exceed them.

Great Expectations is presented in an aspect ratio of 2.35:1. The 1080p image is arrived at with an AVC MPEG-4 codec at an average of 32 mbps. The Fox Blu-ray does a terrific job bringing the film’s grim setting to life. Everything from the properly damp palette of the marshes in Kent to the relentlessly gray scenes set in London is appropriately Dickensian. That being said, there are some moments of unabashed, panoramic beauty (usually involving those marshes) coupled tremendous detail in close ups. Certain scenes — particularly the ones involving the older Pip and Estella — appear to be desaturated, which helps give some medium shots an intentionally soft, dream-like appearance. That being said, the image pops with color whenever Estella appears on screen. (Whether it’s her red hair or bold, colorful dresses.) Conversely, black levels are very deep and offer strong shadow detail. (Particularly any scene involving Jaggers, who is literally made to look like a shady lawyer.)

The DTS-HD Master Audio 5.1 track expertly offers a full, lush sound field without going over the top. When Pip is hanging out by the water with Joe, you can hear the gentle rustling of the waves in the background. On the other hand, London comes off as boisterously loud as it probably felt to Pip: an assault on the senses. The track is also very dynamic. For example, the sound of Joe or Pip hammering a piece of iron starts at the front speakers and echoes throughout the rears. Dialogue comes through clearly; well, at least to the extent Fiennes’ delirious ranting in the beginning can be understood. Most importantly, the track is fantastically balanced; I loved the way Richard Hartley’s score harmoniously shared space with the atmospheric sound effects and everything else going on in the surround speakers.

Great Expectations — Premiere: (3:37) Opens with critics’ blurbs exalting the film’s virtues and closes with enthusiastic audience comments from a screening. In between we get insight from Newell, Coltrane, and several of the film’s producers. As you can tell from the brief length, this one isn’t too in-depth, so feel free to skip it. (No other cast members make an appearance.)

Great Expectations deals with the pitfalls of instant wealth and success, as well as the desperation to cling to that new and improved status at all costs. It also deals with all the reasons financial ruin can be devastating. You don’t have to look too hard to find modern parallels. (Like anyone who becomes an celebrity overnight, spends their money unwisely and winds up right back in the poor house.)

Despite some strong performances and impressive production values, this is a fine-looking film that often feels like a truncated Masterpiece Theatre production. That’s not meant as a slight, since Masterpiece Theatre is responsible for some truly excellent work throughout the years. It just never feels like this particular version was crying out to be seen on the big screen. For that reason, I suspect it actually plays a little better on Blu-ray…just don’t expect anything great.