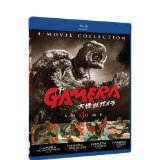 “In our findings on Gamera, we’ve ascertained that: Firstly, it is attracted to and consumes fire. Secondly, it also seems to possess an internal power plant, of sorts. This emits a signal frequency that can jam radio communications. In order to store up energy reserves, Gamera consumes inorganic resources. Not only does it consume petroleum as well as other mineral and fossil fuels, but Gamera may also seek out atomic bombs.”

Ask anyone about Japanese monster movies and Gamera usually won’t be the first name that comes into their minds. Godzilla would likely dominate the conversation, and for most of the last 60 years the folks at Toho have been synonymous with large monsters. But they didn’t exactly hold a monopoly on the big beasts. Kadokawa Pictures had their own little monster franchise going on. It all started in 1954 with Gamera: The Giant Monster. From 1965 through the 1970’s the studio would produce eight Gamera films in all. Now Mill Creek has gathered all eight films into two four-movie Blu-ray collections.

Gamera was a giant turtle who was awakened from his millions-of-years slumber when a Soviet nuclear bomber crashed into the Arctic. The ensuing explosion cracked the ancient ice and unleashed Gamera. The turtle was not only huge and could breathe fire, but he could fly, looking like a flying saucer as he spins his way through the sky. Before long, no one in the entire world is safe as Gamera is eventually sighted in many countries across the globe. An international team is assembled to stop the creature before his destructive rampage devastates all of humanity. Conventional weapons are useless. Gamera’s hide is too thick for most projectile weaponry. Any type of energy weapon is merely consumed by the creature, giving it even more strength. Even the power of an atomic bomb will only fuel the beast’s internal engine. Plans to freeze the turtle only meet with partial success. It appears the monster is indestructible. Mankind’s only hope is to capture Gamera and send him to Mars, where he will be unable to threaten the human race again…or will he?

Gamera meets all of the traditional giant monster movie traditions. You have the somewhat radiational origins of a sleeping behemoth from prehistoric ages. There are plenty of scenes of Gamera trouncing on buildings and fleeing mobs. You must always have that scene where the monster breaks through some electrical lines. There is even a young boy who likes turtles and thinks that Gamera might be his own pet turtle, now grown to super size. Gamera saves the young boy from a fall. This ends up becoming a very important theme in the Gamera films, one the Toho folks eventually tried to copy with Godzilla. Gamera became a friend, and often guardian, of children. He had a weak spot for youngsters and often fought other creatures to protect them. In Japan the theme caught on and Gamera became a huge, pardon the pun, hit among school-age children. Even today the giant turtle can be found on everything from bed sheets to lunchboxes. Now is your chance to check out the only real competition Godzilla ever faced.

In the second Gamera film, Barugon is the nemesis. When we last saw Gamera, he was strapped to a rocket and leaving Earth forever. But when you have a hit monster on your hands, forever isn’t what it used to be. Gamera breaks free and returns to Earth to do a little more breaking, namely dams, buildings, and vehicles. But he might be just in time to stop the new threat of Barugon. Unfortunately, turtles don’t like that much cold, and Gamera is locked in a deep freeze. Who will save the planet now? Unfortunately, Barugon is one of the worst-looking monsters in the series. His head looks like a papier-mache piñata, held up by visible strings. But Gamera himself is better designed with more detail, and this time in color.

Earthquakes and violent volcanic eruptions have put the people in a panic. Of course, the extra heat draws the attention of Gamera. The giant turtle isn’t the trouble, however. It’s a new monster called Gyaos. He has a terrible ray that slices its way through the Japanese defenses. Gamera just might be Earth’s only hope.

This film begins the slide into the children’s franchise Gamera became. He was always called the “friend to children”, and it’s a child here who befriends the monster and rallies him to defeat the bad creature. The monster itself looks like a giant bat and is the result of crooks bringing back an egg they thought was an opal they were stealing from a primitive village. Light and water end up being the weapons mankind has against the creature. The end plan is one of the silliest. They lure him to a platform to make him dizzy.

The film does include some of the better effects as the ray slices through a copter, attack planes and even a car full of people.

Gamera is in space protecting Earth from an invading ship. When they learn of his love of children they capture two boys to try and blackmail Gamera into helping with their plans. Of course, the boys are pretty clever and running loose on the ship play all manner of havoc with the aliens. In the end the boss grows to giant size and Gamera has to fight him.

The monster doesn’t even really appear until the last 10 minutes. He’s a kind of squid. This begins a formula where a couple of kids outsmart an alien invasion. The movie also incorporates a ton of footage from the three earlier films as the aliens probe Gamera’s memories.

Scientists receive electrical transmissions that appear to come from intelligent beings in space. Before you know it two kids have discovered a spaceship and use it to go to a twin planet on the other side of the sun. Here disasters have destroyed the planet, and it is overrun by monsters. They use a controlled monster named Guiron to tackle the menaces there.

Just two spacewomen remain, and they intend to return to Earth in the ship with the kids. Only they are going to use them for rations along the way. It appears they have a taste for human brains. Of course, the kids disrupt their plans, and Gamera comes to rescue them from the planet and Guiron.

Guiron is a crawling creature with a giant knife for a head. He uses it to slice and dice his way through other monsters, including Gamera. With help from the kids, Gamera recovers enough to defeat the creature in the end.

This film uses the fact that the 1970 World’s Fair Expo 1970 was happening at Osaka, Japan. We get some stock footage of the pavilions, and it serves as a backdrop for one of the better of the later films.

A statue has been discovered on a remote island and is being brought to the Expo to study. Unfortunately, it has been keeping a monster asleep for millions of years. Now Jiger is awake and threatens to smash the entire Expo.

Jiger looks like a saber-toothed triceratops. Some of the best monster footage of the series can be found in this one. Yeah, there’s a silly kid and plenty of the usual camp, but it’s the strongest of the sequels. No alien invasion for a change, and the focus returns to the monsters and the “romp and stomp” we love about these films.

It’s back to the alien invasion theme and another silly couple of kids trying to thwart the aliens. This time Japan’s Sea World is the backdrop and the kids are much older and a boy and girl. It’s also more futuristic. Japan has a base on the moon that is attacked by a ship that looks like a crown with crunchberries on top. The aliens then come to Earth. They want to live in the oceans and use the human population for food.

Eventually, the ship is destroyed releasing a giant monster that looks like a cross between a shark and swordfish.

It took almost 10 years for Gamera to return, only he didn’t really return at all. There’s no new Gamera footage here, and about half the movie is a series of his battles against the previous monsters.

The new footage involves three spacewomen in capes and tights trying to protect Earth from yet another alien invasion. Of course, there’s a kid who’s in love with Gamera and helps to save the world. Consider it a clip show and the worst of the series.

These movies are presented in their original aspect ratio of 2.35:1. The 1080p image is arrived at with an AVC MPEG-4 codec at an average 20 mbps. The first movie is in black & white. The rest of the franchise was filmed in color. These are old films from what was then a fledgling franchise. The prints show the obvious appearances of wear. You’ll see dirt and scratches, but there is an obvious effort here to deliver the best element that was possible. The contrast is also very weak at times, leaving little in the way of deep black levels. Still, I found the print far better than the bootleg and television copies that have previously been the best available. It’s an improvement that fans will surely appreciate. Hey, the image is sharp enough to see wires holding up some of the aircraft.

Unfortunately, only the original Japanese track is included here. You have to remember that the English version of the first movie was changed much like the original Godzilla had been with the Raymond Burr added scenes for American audiences. It was called Gamera: The Invincible and also featured new Americanized footage. That’s not what you’re getting here, and it’s likely there isn’t a dubbed version of this film anywhere. The rest of the films are also straight Japanese release versions. They do contain hiss and some distortion at times. You can hear just fine. Gamera’s roar is intact and as good as I expected it to be, if not a little bit better. There is a fair amount of English, anyway. The scenes of American soldiers are originally filmed in English and preserved here.

This summer we’re about to see a new Godzilla. I’m sure that had a lot to do with this release. Mill Creek hopes to capitalize on the monster fever they hope Godzilla will revive. Of course, there’s always a tie-in with the upcoming new Teenage Mutant Turtles. OK, that might be a reach, but so are these Gamera films. Like the old game machines used to say: for entertainment only. It’s all very silly but a worthy collection at a good price. After all, “We adults must not lose a child’s insight”.

Gino Sassani is a member of the Southeastern Film Critic's Association (SEFCA). He is a film and television critic based in Tampa, Florida. He's also the Senior Editor here at Upcomingdiscs. Gino started reviewing films in the early 1990's as a segment of his local television show Focus. He's an award-winning recording artist for Omega Records. Gino is currently working on his 8th album Merchants & Mercenaries. Gino took over Upcomingdiscs Dec 1, 2008. He works out of a home theater he calls The Reel World. Favorite films: The Godfather, The Godfather Part II, The Body Snatcher (Val Lewton film with Karloff and Lugosi, not the pod people film), Unforgiven, Gladiator, The Lion King, Jaws, Son Of Frankenstein, The Good, The Bad And The Ugly, and Monsters, Inc.
The Veronica Mars Movie (Blu-ray) Bachelor Party (Blu-ray)