Posted in: Disc Reviews by Jeremy Butler on June 3rd, 2014 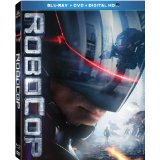 What makes us human? That is the primary theme of Robocop, the remake of the 1987 film of the same name. The 1987 film was a huge blockbuster success, spawning two sequels, and no doubt that is the hope for the remake at the very least. Joel Kinnaman steps into the suit made famous by Peter Weller, and he is not the only big name to grace the film: Michael Keaton, Samuel L. Jackson, Abbie Cornish, and Jackie Earle Haley, as well as the great Gary Oldman playing the doctor who made Robocop possible: with such a top-notch cast, how could the project fail?

Deviating from the original plot a bit, Omnicorp is the largest manufacturer of cybernetic organisms and has made billions supplying their devices to the government, which has used the machines to reduce our human military presence overseas, believing that the use of machines makes the process more efficient and prevents the loss of life due to human error. Omnicorp CEO Raymond Sellars (Michael Keaton) aspires to have his product used domestically, taking over for humans as the guardians on the police force.

Despite the efficiency of his machines, Sellars receives no love from Congress, which approves a bill known as “the Dreyfus Act,” prohibiting the use of the machines on domestic soil. The bill is spearheaded by Senator Dreyfus, who does not believe that being protected by machines is the best course of action, given that unlike humans they are unable to feel emotions and can therefore not feel guilt. It is then that Sellars pronounces an idea to help circumvent the bill and help gather public favor to help get the bill repealed: Omnicorp will put a man inside the machine.

Enter Alex Murphy (Joel Kinnaman), an honest cop who becomes the victim of a car-bomb planting to remove him as an obstacle to couple of his fellow cops’ dirty dealings. Murphy barely survives the attempt on his life, and the damage done to his body guarantees he will never be a cop again. It is in this state that Murphy’s wife Clara (Abbie Cornish) consents to the project to have her husband remade. After the process, the field testing proves to be challenging, as what makes Murphy human, his emotions, conflicts with his programming, making him less effective than Omnicorp’s other products. Desperate to deliver, Sellars pressures Dr. Dennett Norton to find a result: by dialing down on Alex’s Murphy brain chemistry, Dr. Norton achieves his goal; however, at the cost of what makes Alex human.

Alex’s behavior makes him nearly unrecognizable to his former partner, his son, and especially his wife, who begins to question the decision she made. However, another threat to the project presents itself as Murphy begins to solve the case of his own attempted murder, and Alex begins to fight against his programming, asserting his personality again, unraveling the company’s hard work, and discovering a deep, dark secret within the company.

Not quite the blockbuster I was expecting; however, the film still manages to deliver the essentials of what made the original project great. The film delivers plenty of action as well as adding new twists to the original idea. The film manages to establish itself as a separate entity without becoming unrecognizable from the original. Certain details are updated, such as the circumstance that caused Murphy to become Robocop. Truth be told, I prefer the modern take on Alex’s accident, given that it is easier to believe him to survive the explosion.

On the downside, the film does lack some development in the beginning, as we don’t get a real sense of the world we find ourselves transported into. We see the technological advances; however, we do not know if this was the natural progression of things or a necessary progression as such in the original film. Also Omnicorp’s duplicity is never fully touched on or explained; we can infer they aren’t on the level, but I never felt like audience received a full explanation.

Another bonus was the casting of Kinnaman as Murphy, who would have been my first choice to play the action star. Kinnaman puts real emotion behind his performance; the best example of real emotion would be when he is shown what remains of his former body and he asks to die. The emotion back and forth between him and Oldman is what really brought life to both their characters and gave the first real sense of who the characters were. More examples of great casting were Keaton and Haley who made it easy to hate them, especially Keaton. Samuel L. Jackson is not to be forgotten either, providing the comedic conclusion to the film in true SLJ fashion.

Robocop is presented in its original aspect ratio of 2.40:1. The 1080p image is arrived at with an AVC MPEG-4 codec at an average 25-30 mbps. The high-definition presentation brings you an impressive image, to be sure. You know this is a new Robocop. The digital source material provides a flawless transfer here. Black levels are superb. The black suit allows remarkable definition even in darkness. This is also where you’ll find the texture and detail that makes the film stand out. Colors are a bit muted in this future world, but consider it all a part of the depressed environs of a future Detroit. It’s all intentional, and if you need proof that color can indeed break out, you need look no farther than the red strip light of the helmet shield. The contrast is outstanding.

The DTS-HD Master Audio 5.1 is nothing short of explosive. Subs erupt with all of the on-screen violence. Surrounds provide the punctuation mark as bullets appear to fly everywhere around you. This is absolutely an immersive experience. Dialog comes through at all times even with a sometimes over-aggressive score.

Deleted Scenes: (3:59) There are five with a handy play-all. Nothing special here, and some footage was cut pretty early as the f/x are not completed.

Omnicorp Product Announcements: (3:27) There are 10 ads for various Omnicorp products. Each about 30 seconds. You have a play-all.

Engineered For The 21st Century: (28:47) This behind-the-scenes piece is broken into three parts. You can access them individually or as a play-all. They are:

The Illusion Of Freedom – A New Vision: Here there’s talk of the philosophy of remaking the film. You get clips from both this film and the original movie.

To Serve And Protect – Robocop’s Weapons: Here you see the weapons training the actor went through. There’s closer looks at the weapons themselves and the bike.

Robocop Suit – Form And Function: This is all about the suit from design, construction and various tests.

The theme for the film is what will make the project a success in my opinion, because it will be a topic that will most likely be discussed well after you leave the theater; I know I was still thinking about it. The reality of it is bound to become a hot topic of debate in years to come as technology advances: is it better to be efficient or to have emotion?

Jeremy Butler is a film school graduate of the International Academy of Design and Technology. He is been writing for Upcomingdiscs since 2012; however, movies have played a big part of his life for much longer. Favorite genres include horror, science fiction/fantasy, and comedy. Favorite movies are V for Vendetta, Boondocks Saints, Kiss Kiss Bang Bang, and The Godfather.
Journey to the West (Blu-ray) True Blood: The Complete Sixth Season (Blu-ray)