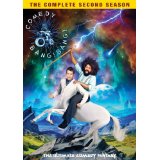 For its second season, IFC’s Comedy Bang! Bang! got bigger and bolder in the way it manically skewered decades of talk show and pop culture conventions. Not surprisingly, the show also got even weirder.

Comedy Bang! Bang! is the brainchild of creator/writer/host   Scott Aukerman. The TV show is a spinoff of Aukerman’s successful podcast of the same name, which began airing in 2009. Aukerman previously worked as a writer/performer on HBO’s Mr. Show with Bob and David. (Both Bob Odenkirk and David Cross make return appearances in season 2 of Comedy Bang! Bang! Cross guests as himself, while Odenkirk drops by for a cameo in the same episode, and it was cool seeing the guys briefly share the screen again.)

Aukerman also created the sketch that became Funny or Die’s Between Two Ferns with Zach Galifianakis. You can absolutely see the comedic DNA of both of those shows in Comedy Bang! Bang! which mixes the outrageous, farcical sketch comedy of Mr. Show with Fern‘s largely-improvised interview segments.

Season 2 of Comedy Bang! Bang! has 20 episodes — twice as many as the debut season — and features some tweaks to the show’s off-beat formula. Instead of jumping right into the repetitive, deliriously-catchy opening credits/song, every episode now has a bizarre cold open. Most of these cold opens establish what is going to be that episode’s running gag, including a bomb that will destroy the studio if Scott doesn’t finish the show in exactly 30 minutes, or a team of scientists (led by Law & Order: SVU‘s Christopher Meloni) who shrink themselves so they can enter Scott’s ailing body and fight a virus. The inclusion of these recurring gags means this batch of season 2 episodes mostly features two guests for Scott to interview, as opposed to the three who typically appeared in season 1. Bandleader Reggie Watts also gets a moment to ask a question that is inevitably terrible/convoluted.

Overall, it’s a good change because it gives Scott some more time with celebrity guests who seem eager to take a break from the asinine questions they have to answer in real life. (The show parodies these sorts of questions by having Scott ask different guests, “How do you juggle work and family?” The recurring gag pays off nicely in the Jason Schwarzman episode.) Even stars who aren’t exactly known as comedic powerhouses — like Zoe Saldana, Jessica Alba, and Clark Gregg — seem liberated by the show’s silliness.

On the other hand, I missed the more free-flowing, anything-can-happen vibe of the season 1 celebrity interviews. I know these segments still feature a strong element of improv — like when Scott asks Anna Kendrick to repeat an absurdly complicated vocal warm-up — but it felt like a larger part of the celebrity interviews were more overtly scripted, which took a bit of the comedic charge away. Thankfully, there was still time for lesser-known/no-less funny comics like Jordan Peele, Will Forte, Adam Pally, Thomas Lennon, Jason Mantzoukas and *many* more to drop in and play outrageous characters like bitter psychic Tan Fu, an over-sharing senatorial candidate, and a vampire chef.

As you can probably tell from that last sentence, the show has little trouble maintaining its anything-can-happen tone despite the more scripted interviews. Season 2 featured another treasure trove of pop culture parodies. My favorites involved the fake trailer that took aim at movie critic blurbs, and the pinpoint spoofs of show like Cheaters, Shark Tank, or anything hosted by loudmouths like Guy Fieri. Each of the spoofs inevitably takes an off-kilter twist that isn’t totally necessary because the show does a brilliant job of mocking its target’s ridiculousness with a straight face.

Some of the season’s most inspired episodes were also the ones that mocked TV conventions. So while season 2 might be way too early for most shows to already be doing a musical episode, Comedy Bang! Bang! jumped in feet first with a half-hour that featured guest star Casey Wilson, “Andrew Lloyd Webber,” and songs that sounded awfully close to material from “The Phantom of the Opera” and “Les Miserables.” There are also a couple of holiday episodes, although I preferred the Christmas-themed season finale — with Galifianakis as Santa Claus — to the Halloween episode co-starring Pee-Wee Herman. (A cool appearance, since Pee-Wee’s Playhouse appears to have strongly influenced Aukerman’s brand of anarchic humor.)

Aukerman gets plenty of mileage out of his apparent unease on television. He’s long been a generous improvisational interviewer but has also proven to be a sneakily strong comedic actor. I especially enjoy his forced geniality during any pre-taped bit and his easy chemistry with Watts, whose musical cues remain as demented as ever. (Although Reggie does get to show off his legit vocal chops in the musical episode.)

I also thoroughly enjoyed the inspired, Sliding Doors-esque alternate reality episode with Andy Dick, as well as the “unaired pilot” of Comedy Bang! Bang! that more closely-resembled a traditional Late Night talk show. It also featured a quietly terrific performance by How I Met Your Mother star Cobie Smulders as one of the few guests Scott treats poorly. (Conversely, when Rashida Jones tried to react to Scott’s comically poor treatment in an earlier episode, it was more awkward than funny.)

Comedy Bang! Bang! The Complete Second Season features all 20 episodes on three discs, and each episode comes with a commentary track. This set also has a fourth disc with a ton of bonus material, including extended/alternate interviews, a talkback with the cast of the musical episode, VFX tests, and more. The third season of Comedy Bang! Bang! is currently airing on IFC and is more in line with the comedic rhythms of this second season. So if you’re looking for a twisted take on the late night talk show — or oddly specific spoofs of the stuff you think no one else watches — you should check out this particular brand of insanity and inanity.

300: Rise of an Empire (Blu-ray 3D) Transformers: Age of Extinction