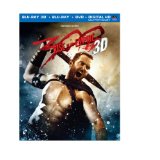 “It begins as a whisper. A promise. The lightest of breezes dances above the death cries of 300 men…”

It may have started as a whisper, but 300 quickly became synonymous with roaring, instant-classic declarations after it burst onto the scene in 2007. Zack Snyder’s muscular adaptation of Frank Miller’s graphic novel was an outta-nowhere blockbuster. When a movie achieves that level of success, there’s usually a sequel in the works even as the opening-weekend grosses are still rolling in. Of course, that proved to be a bit trickier given what happens to the heroes at the end of 300.

It’s probably the biggest reason for the relatively long, seven-year wait for a follow-up, which finally arrived this year in the form of 300: Rise of an Empire. The filmmakers —including Snyder, who co-wrote and produced the movie despite ceding the director’s chair to Noam Murro — solved the quandary of continuing a story that ended pretty definitively by only partially continuing the story. 300: Rise of an Empire takes place before, during, and after the events of the first movie. (Think The Bourne Legacy; actually, don’t think of The Bourne Legacy.) So the film is a prequel, sequel and (as dubbed by a crew member in one of the behind-the-scenes docs) an “equal.”

Rise of an Empire opens in the immediate aftermath of the first film’s climactic clash between the Persians and the badly-outnumbered Spartans at the Battle of Thermopylae. Spartan Queen Gorgo (Lena Headey) rallies her troops by telling them about Greece’s victory against the Persians a decade earlier at the Battle of Marathon. It was during that battle that Athenian General Themistocles (Sullivan Stapleton) killed King Darius I of Persia. Darius’ son Xerxes (Rodrigo Santoro) is spurred by his father’s death — and by cunning naval commander Artemisia (Eva Green) — into a journey that transforms him into the giant God-King/facial jewelry enthusiast we saw in 300.

Most of Rise of an Empire takes place concurrently with the original film. So while Gerard Butler’s King Leonidas is fighting the Persians off-screen at Thermopylae — apparently there wasn’t enough money in the budget to convince Butler to return to the franchise that made him a star — Themistocles takes to the seas to battle Artemisia’s impossibly vast fleet.

The film is purportedly based on “Xerxes,” an upcoming graphic novel from Miller that wasn’t even completed by the time the movie came out in March. As a result, Rise of an Empire isn’t beholden to any pre-existing source material, just like it’s not beholden to the historical events it depicts. If anything, this film only seems dedicated to the blockbuster that preceded it.

In keeping with the mythologizing tradition of 300 — not to mention the mythologizing tradition of ancient Greece — the events in Rise of an Empire are relayed as legend. (David Wenham’s Dilios narrated the original film, while multiple characters — including Gorgo and Artemisia — take turns in the sequel.) Of course, the most obvious similarity between both films is the balletic orgy of violence on display. Setting a good part of the action on the high (CGI) seas helped distinguish some of the sequel’s set pieces from the original and allowed for a higher level of wit and strategy. But fret not, blood-hounds: Rise of an Empire‘s hand-to-hand combat sequences featured so much slashing and dismembering that it seemed like the film was trying to set a record for most amount of fake blood sprayed on its audience. (More on the 3D effect in the Video section.)

On the other hand, Murro — whose previous directorial credit was…Smart People(?!) — isn’t quite able to replicate the breathtaking carnage of the original. I have my issues with Snyder as a director, but there are a bunch of stills in 300 that could hang in a museum. Despite a solid effort from Murro, none of the moments in Rise of an Empire prove to be as exhilarating. In fact, by the 78th spray of blood, you’ll likely feel a little numb to the ultraviolence.

Given the attention paid to the visual effects, most of the cast feels inconsequential. We do get a glimpse of Santoro before Xerxes’ extreme makeover, but the character mostly hovers around the fringes of the film again. Headey seems excited to be back on a 300 set — and incongruously brandishing a sword this time — but it’s not really her movie. As a result, there really isn’t much for the actress to do. The biggest letdown is the rest of the Athenians. They’re presented as more democratic and enlightened people than the Spartans, but only three of them besides Themistocles seem to have speaking parts. (Two of them are a father-son fighting duo named Scyllias and Calisto played by Callan Mulvey and Jack O’Connell, respectively.) The rest really could’ve been a bunch of random, ripped guys from the local gym.

Stapleton (Strike Back) is similarly a less-inspiring version of what we’ve seen before. I like the idea that Themistocles — an Athenian general and politician — is a more thoughtful alternative to the growling Leonidas. And the actor is presented as a more streamlined hero than his jacked, brawling Spartan counterparts. Unfortunately — and not surprisingly — the script doesn’t really allow for a more thoughtful hero to fully take form in the world of 300. So Stapleton often finds himself giving the same rote motivational speeches with about 35 percent of the nutso gusto Bulter brought to the material.

Thankfully, the film’s “nutso gusto” mantle is gleefully taken up by Green, who looks to be having a blast as Artemisia. The character gets a tragic backstory and enough attention to truly put her on equal footing with Themistocles. But when the two actors face off, it’s Green who (literally) comes out on top in the film’s best scene. The actress seems totally aware (and totally jazzed) about how over-the-top this movie is. Who knew making out with a severed head could be so liberating?

300: Rise of an Empire is presented in an aspect ratio of 2.40:1. The high-definition 3D image is arrived at with a standard dual MVC at an average of 24/11 mbps. The film was expertly converted to 3D in post production. I’m guessing the conversion process here was relatively smooth because the majority of what we see on-screen is digitally-created in the first place. (As opposed to 3D conversions of older movies, which can make actors seem like they’re starring in a pop-up book.) As far as the 3D goes, you get Xerxes’ battle ax poking out at you early on along with a few stray arrows and spears. But the real showstoppers are the never-ending splashes of blood. Murro delights in pausing and taking snapshots of each brutal cut; it’s almost as if he’s waiting for anyone watching in 3D to get sprayed before he moves on to the next dismemberment. There are also nice bits of texture courtesy of rain drops and flecks of dust.

The film largely retains the de-saturated look of the original, but also mixes in some muted blasts of color. In addition to the ever-present crimson blood, we get a burst of gold during Xerxes’ origin segment, as well as the blue on the Athenians capes. Black levels generally provide strong shadow definition, but some of the action on the high seas inevitably becomes a bit murky. However, this is a minor complaint in what is one of the more impressive examples I’ve eever seen of a 3D conversion.

The DTS-HD Master Audio 7.1 track uses the entire surround sound field to make you feel every single blow that is landed. The result is an all-consuming experience that gives equal weight to clanging swords, crashing waves, and gusting winds. (Not to mention the fact that whenever two ships smash into each other, the subs practically make the room shake.) There’s also some nice directionality on display during the more hectic and crowded battles. There was nice clarity on the dialogue throughout, but it sometimes came off a bit soft compared to everything else that’s going on here. (This is the part where you say “Who cares about the dialogue in 300: Rise of an Empire?! Fair point.)

All of the bonus material is presented in HD and can be found on the 2D Blu-ray disc.

The 300 Effect: This is actually a quartet of featurettes that compares and contrasts Rise of an Empire with its blockbuster predecessor. 3 Days in Hell (7:08) takes a closer look at the two films’ overlapping timelines; Brutal Artistry (9:08) examines the influential look of the 300 films; A New Breed of Hero (4:49) re-establishes the more modern-thinking Themistocles as a different beast from Leonidas; and Taking the Battle to Sea (8:52) reveals that setting a bulk of the action at sea was a big selling point for the sequel. (Especially when you don’t have to work in real water.) There is no Play All option, which is a bit irksome.

Real Leaders and Legends: (22:52) Explores the real-life people and politics of the era in a good amount of depth. Snyder describes the 300 films as “making mythology out of reality” while someone else calls them “derivative artistic experiences based on fact.” Both are fancy ways of saying, “None of this happened the way we’re showing it to you, but it sure does look cool!”

Women Warriors: (12:22) An interesting featurette dedicated to Eva Green’s Artemisia (who steals the movie) and Lena Heady’s Gorgo (who plays a brief, albeit more active role). There’s also some examination of the real-life women and their uncertain fates.

Savage Warships: (10:36) A look at the creation of the naval battles and the ancient ships that inspired what we see in the film. I liked seeing the real-life groundwork for the outlandish visuals that wound up in the end product.

Becoming a Warrior: (4:39) Lead fitness trainer Mark Twight gets plenty of praise from the cast and crew for whipping the actors into fighting shape.  There’s also a peek at the sword fighting training.

When 300 came out, I was wowed by a lot of the visuals because they made the film feel like it was part of something exciting and distinct. (Or at least a less gritty and more classical realization of Sin City, another Frank Miller adaptation that had come out two years earlier.) However, I actually didn’t much care for 300 as a complete, satisfying movie. The sequel doesn’t quite remedy that problem; in fact — with the exception of Green’s go-for-broke performance — it’s actually slightly worse.

What Rise of an Empire does have going for it are some amazing sounds and visuals, which are presented wonderfully on this 3D Blu-ray from Warner Bros. The bonus material on this release is also interesting, despite the fact that it shines a spotlight on all the liberties taken with ancient history.

It was always going to be impossible for this film to re-capture the game-changing essence of its predecessor, but it still makes for a bloody good time.